Funmilayo Ransome-Kuti achieved goals that, during her time, society kept out of women’s reach. Often understated today as the first woman to drive a car in Nigeria, Ransome-Kuti’s achievements were exceptional, multi-faceted and far-reaching.

Africa’s achievements in gaining independence and institutionalizing proper constitutions, human rights, law and order, and democracy—key elements of social progress—were enabled by the tireless efforts of people who challenged the status quo. Funmilayo Ransome-Kuti, who died today in 1978, was one of such people. Her courage, determination and commitment to women and humanity at large made her a symbol of radically progressive twentieth-century leadership.

NO LONGER AT EASE 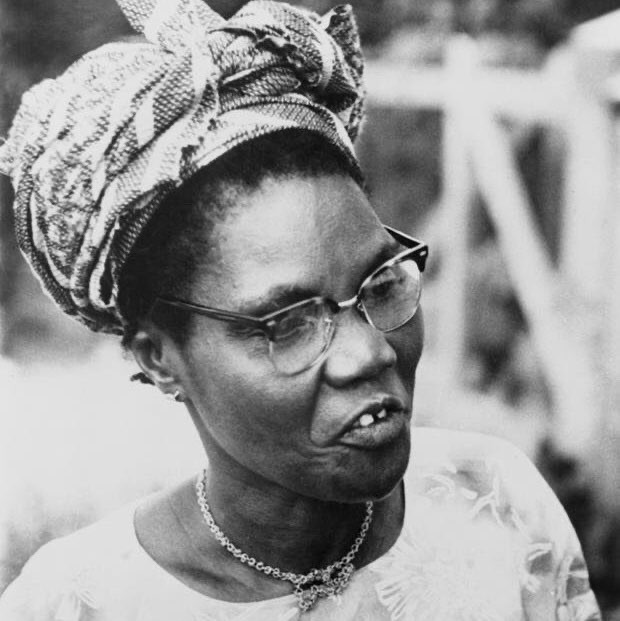 Funmilayo Ransome-Kuti’s courage, determination and commitment to women and humanity at large made her a symbol of radically progressive twentieth-century leadership. © SMITHSONIAN ARCHIVES.

Funmilayo Ransome-Kuti was born on 02 October 1900 in Abeokuta, present-day Ogun State. In 1914, she attended Abeokuta Grammar School and, in 1919, she left Nigeria for England, where she continued her education at Wincham Hall School for Girls. Three years later, in 1922, Ransome-Kuti returned to Nigeria. A year after she returned, she took up a teaching position at Abeokuta Grammar School, and taught there from 1923 to 1924.

Ransome-Kuti achieved goals that, during her time, society kept out of women’s reach. She was the first female student to be admitted into Abeokuta Grammar School, an achievement that, no doubt, was foundational to her life of ushering change into many spheres. Often understated today as the first woman to drive a car in Nigeria, her achievements were exceptional, multi-faceted, far-reaching and deserve further study.

Ransome-Kuti founded the Abeokuta Women’s Union, one of the 20th century’s most important social organizations, and was closely linked to the Nigerian Union of Teachers and the West African Students’ Union—two of the most important anti-colonial movements in Nigeria and West Africa. 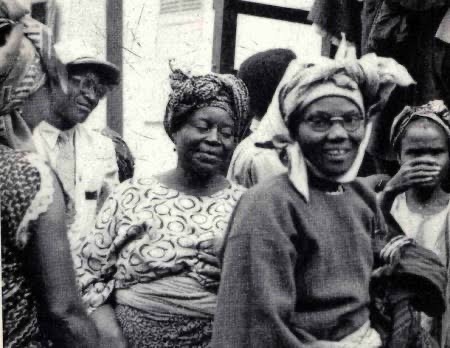 Funmilayo Ransome-Kuti with a group of women. 1940-50s. © UNKNOWN PHOTOGRAPHER.

In 1932, Ransome-Kuti established the Abeokuta Ladies Club and by 1940, through the club, she organized literacy classes for market women in Abeokuta. These classes have been described as the first adult education programme for Nigerian women. Moreover, her engagement with market women exposed Ransome-Kuti to the exploitative nature of the colonial government and served as one of the driving forces of her political awakening.

After World War II (1939-1945), having been perceived to be prosperous as a result of a thriving, predominantly female indigo dye industry, not only did women in the southwest pay taxes, the British government imposed a tax increase on them. Led by Ransome-Kuti, women in Abeokuta organized against the increase.

In 1946, broadening its focus from only middle-class women to women from all walks of life, the Abeokuta Ladies Club became the Abeokuta Women’s Union (AWU) with a membership of around 20,000. In 1947, Abeokuta women staged a revolt against the tax increase so powerful it ‘toppled the king of Abeokuta and changed British policy, triggering a “radical transformation of the political structure in Abeokuta” and women’s politics more broadly.’

A WOMAN OF THE PEOPLE 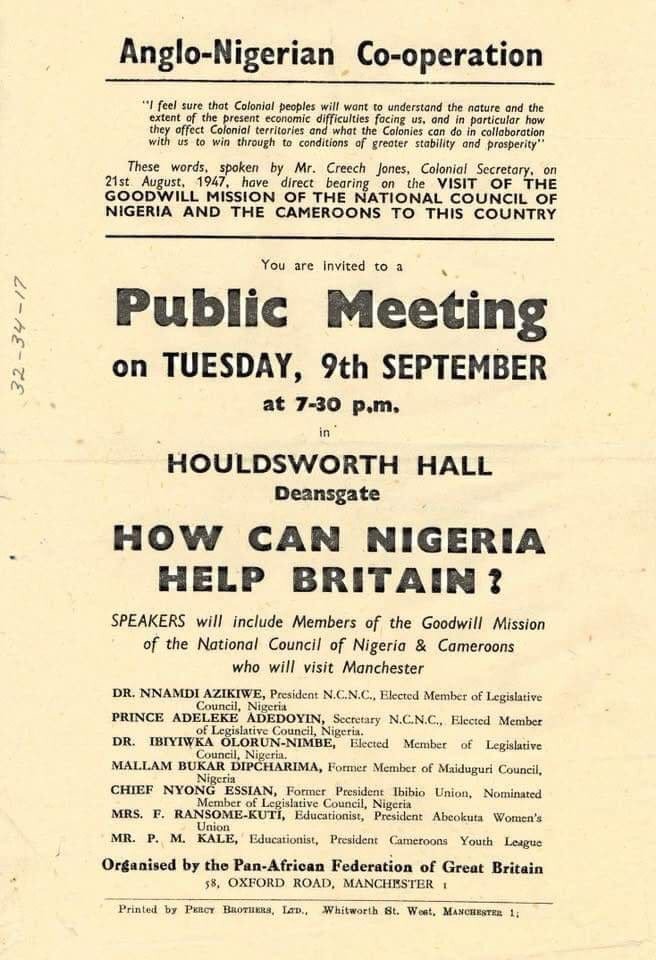 Funmilayo Ransome-Kuti was the only woman in Nigeria’s 1947 delegation to London, where political figures lobbied for Nigeria’s self-government. Pamphlet announcing a meeting held during the visit. © TWITTER.

The Abeokuta women’s tax revolt of 1947 propelled Ransome-Kuti to nationwide and international acclaim. That year, she was the only woman in Nigeria’s delegation to London, where political figures lobbied for Nigeria’s self-government. Similarly, the AWU’s scope, which had been to maintain unity and cooperation among all women in Egbaland, broadened beyond Egbaland. In 1949, the AWU became the Nigerian Women’s Union (NWU), evolving into the Federation of Nigerian Women’s Societies (FNWS) in 1953.

Ransome-Kuti was a key supporter of the establishment of nationalist political party, the National Council of Nigeria and the Cameroons (NCNC), in 1944. By the 1950s, she delved further into politics by contesting for the regional assembly under the NCNC, and later became one of the few women to be an Oloye in the House of Chiefs (an institution that was part of the law-making system).

A HEAD ABOVE WATER 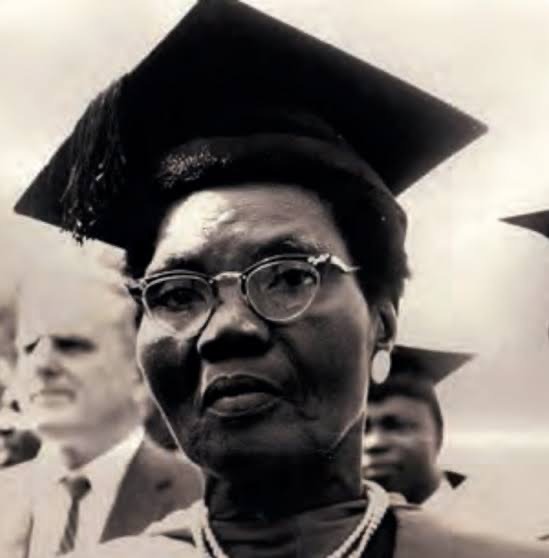 Ransome-Kuti’s achievements included: membership in the Order of the Niger in 1965; and an honorary doctorate in Law from the University of Ibadan in 1968. © UNESCO.

Ransome-Kuti’s achievements included: membership in the Order of the Niger in 1965; and an honorary doctorate in Law from the University of Ibadan in 1968. Beyond Nigeria, Ransome-Kuti had links with women’s organizations in Ghana, Algeria and Egypt. In 1953, she was elected vice-president of the Women’s International Democratic Federation. She was the first Nigerian representative at the Union of Soviet Socialist Republics (USSR) and was also awarded the Lenin Peace Prize in 1970—pointers to her leftist ideological inclinations.

Ransome-Kuti died in 1978, from injuries she had gotten the previous year, when, under a repressive military government, soldiers raided her family’s home in Lagos and threw her out of a second-storey window. Today, there is a tendency to downplay the historical contributions of African women including Ransome-Kuti, whose achievements many have attempted to domesticate (as either a mother or an aunt). Ransome-Kuti’s contribution to Nigeria’s independence movement was, however, undeniable; and her legacy, as Quartz has reported, ‘plays out across the continent’⎈

Here are some Republic articles and interviews to read inspired by Funmilayo Ransome-Kuti and pioneering Nigerian women: