The president of Ghana, Nana Akufo-Addo, giving his speech at the 108th Centenary Session of the International Labour Conference, Geneva. 10 June 2019. CROZET / POUTEAU.

One question that usually arises in the issue of African reparations is: ‘Who receives the compensation and how much?’

Ghana’s president has recently gone viral over a ‘reparations’ speech he gave on 02 August 2022, at the ‘Reparations and Racial Healing Summit’ in Accra, Ghana. At the summit, Akufo-Addo demanded that the West compensate Africa and the Black diaspora for the crimes of the trans-Atlantic slave trade, colonization and the resulting damage to African societies.

‘It is now time to revive and intensify the discussions about reparations for Africa, Akufo-Addo said. ‘The discourse on reparations cannot succeed without emphasis on racial healing. We need to heal from the wrongs of the past in order to capitalize on the opportunities that await us in the future. Even before these discussions on reparations conclude, the entire continent of Africa deserves a formal apology from the European nations involved in the slave trade for the crimes and damage it has caused to the population, psyche, image, and character of the African all over the world.’ 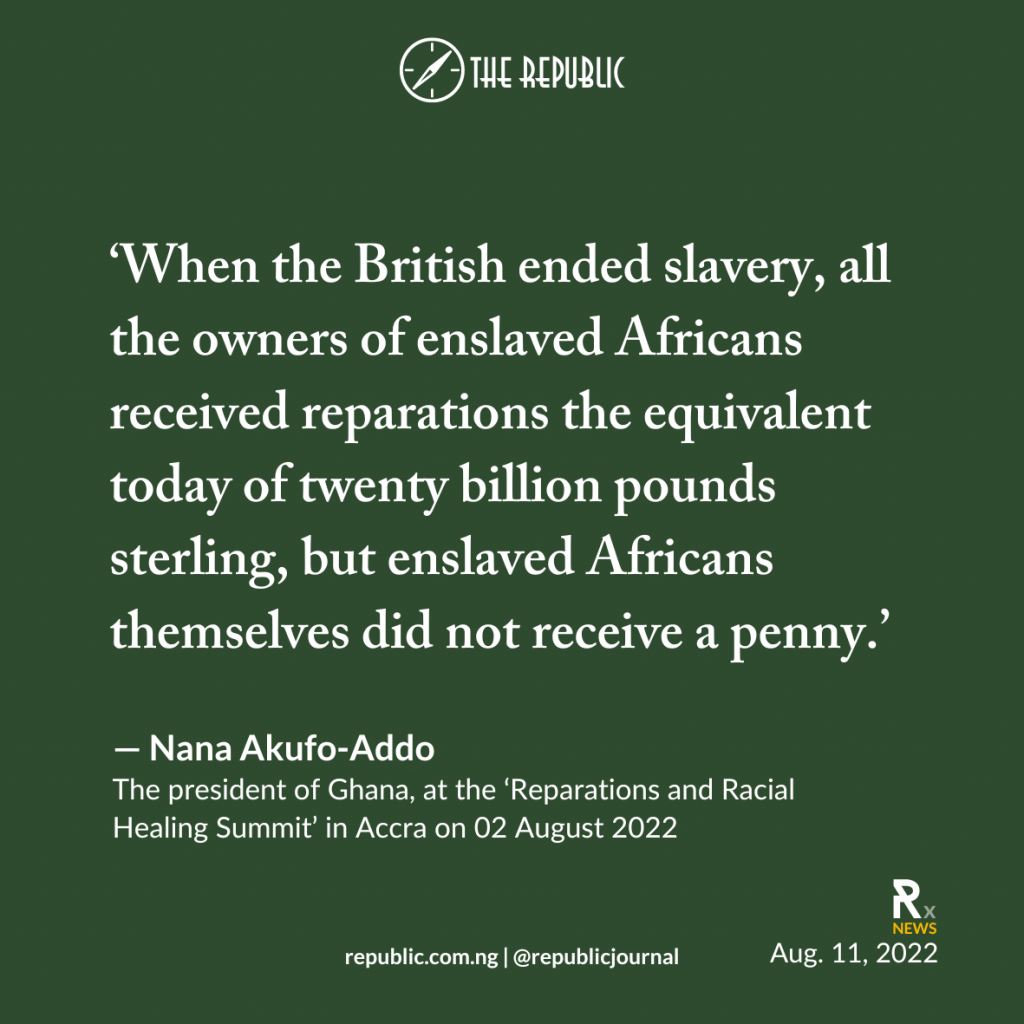 Organized calls for reparations in Africa are not new. One of the earliest documented efforts started 31 years ago in June 1991, when the Group of Eminent Persons on Reparations to Africa and Africans in the Diaspora was established through a resolution passed by the Organization of African Unit (known now as the African Union). Led by Nigerian businessman, Chief Moshood ‘M.K.O.’ Abiola, the group’s members included former Jamaican minister of foreign affairs, Dudley Thompson, Kenyan academic, Ali Mazrui, Nigerian historian, J. F. Ade Ajayi and South African musician, Miriam Makeba.

Abiola’s ‘Eminent Group’ organized the First Pan African Conference on Reparations For African Enslavement, Colonization, and Neo-Colonization. This conference was held in Abuja in April 1993 and hosted delegates from across Africa, the United States, the Caribbean, Brazil, and the United Kingdom. At the time, Abiola was in the running to become Nigeria’s next president, with a presidential election set for June 1993. Abiola promised delegates that he would fully support the African reparations movement at the UN if he became president. ‘Our legs have been broken by slavery and colonialism,’ he said at the conference, ‘and we must insist that these legs be mended’. He also explained that their reparations movement was about justice for Africa, not vengeance.

However, following the June 1993 election, the then-ruling Babangida administration annulled the election and withheld its results. Consequently, the Eminent Group’s campaign for reparations suffered heavy setbacks. Abiola, the group’s leader and most vocal advocate, was forced into hiding and eventually arrested and imprisoned. Abiola remained a prisoner before his death in July 1998. 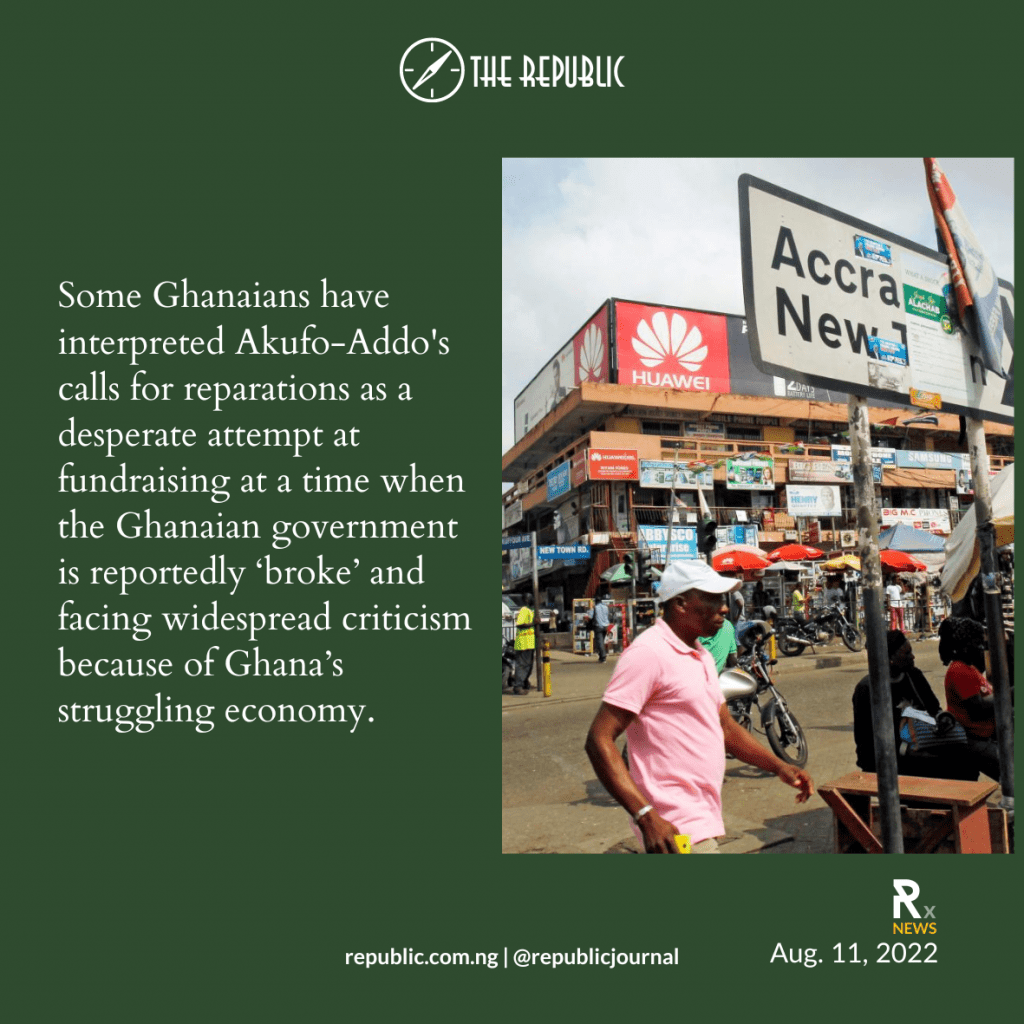 Akufo-Addo’s call for reparations has generated mixed views among Ghanaians and Africans at large. In some quarters, Akufo-Addo, who has been Ghana’s president since 2017, has been ridiculed for his speech. Some Ghanaians have interpreted his calls for reparations as a desperate attempt at fundraising at a time when the Ghanaian government is reportedly ‘broke’ and facing widespread criticism because of Ghana’s struggling economy. Among other challenges, in recent months, Ghana has faced rising annual inflation (from 29.8 per cent to 31.7 per cent between June and July 2022) as well as a 30 per cent decline in the value of the cedi against the dollar since January 2022.

One question that usually arises in the issue of African reparations is: ‘Who receives the compensation and how much?’ In his speech, Akufo-Addo did not provide a conclusive answer. For one, he highlighted historical precedents of reparations paid to Jews and Japanese-Americans after World War II, as well as Native Americans in the US. He mentioned, for instance, the homeland grants and support paid directly to Jewish victims of the Holocaust and their descendants by the German government. However, he failed to note how these precedents may be applicable to African contexts. 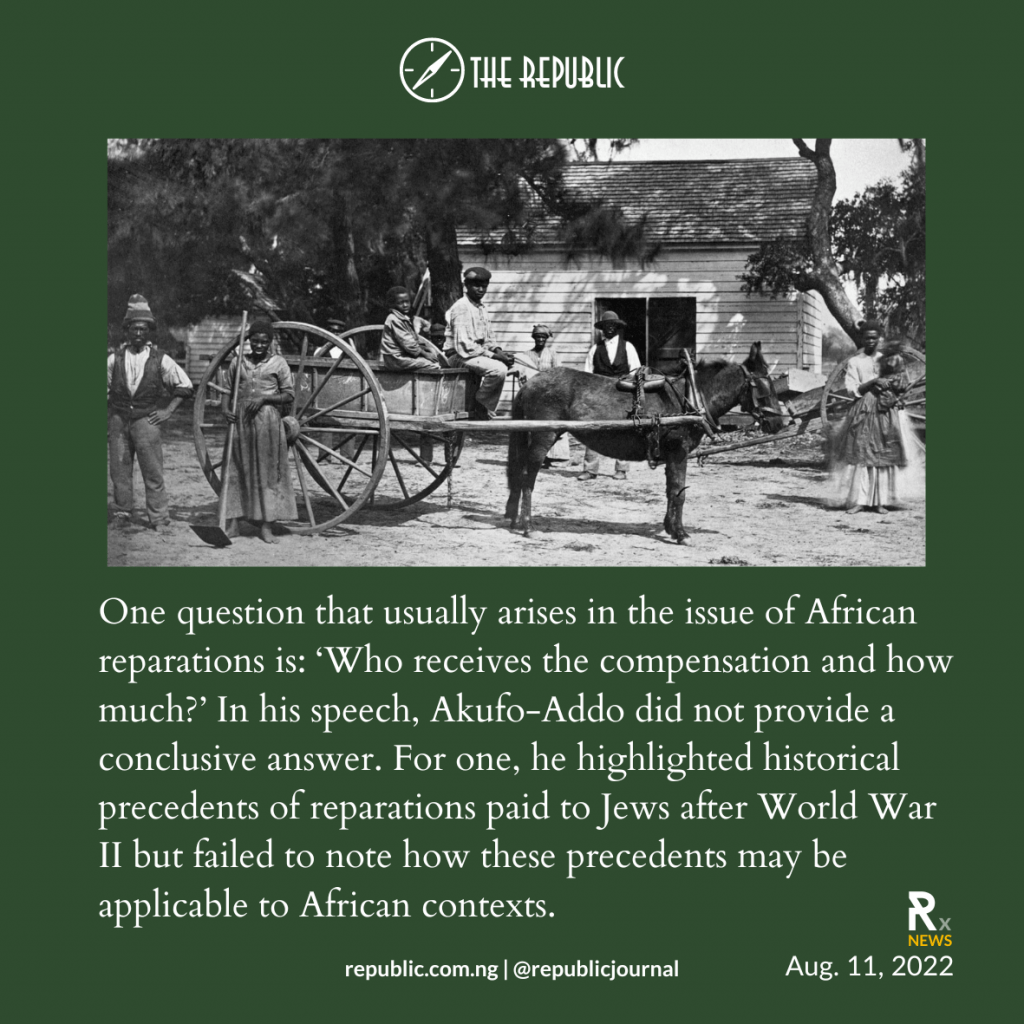 The Abuja Proclamation, passed in 1993, at the end of the Eminent Group’s First Pan African Conference, stated that the group was ‘fully persuaded that the damage sustained by the African peoples is not a “thing of the past” but is painfully manifest in the damaged lives of contemporary Africans from Harlem to Harare, in the damaged economies of the Black World from Guinea to Guyana, from Somalia to Suriname.’

The Abuja Proclamation emphasized that the most important thing in the African reparations debate was not guilt, but responsibility, and called on nations in possession of looted African goods, artifacts, and cultural treasures to return them to the African people. 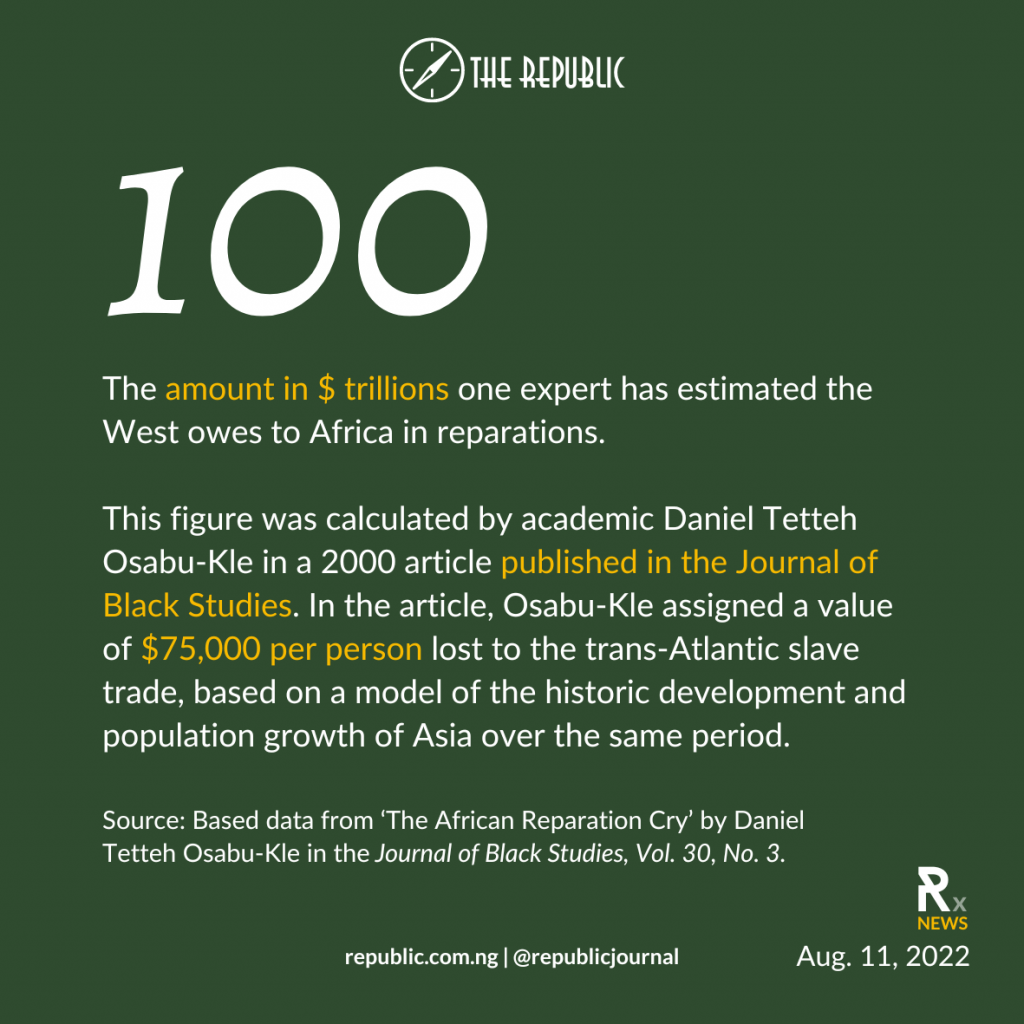 So far, experts such as professor of Political Science and African Studies, Daniel Tetteh Osabu-Kle, have estimated the total amount owed to Africa in reparations to be as much as $100 trillion. In 2021, after apologizing for the genocide that occurred during its colonization of Nambia, Germany agreed to give €1.3 billion to Namibia in the form of financial aid. That same year, Burundi demanded $42.6 billion from its former colonizers, Belgium and Germany⎈

Here are some Republic articles to read for more context on reparations: