Critics have called a design contest launched by NDLEA ‘exploitative’. The contest, where young artists compete by submitting free NDLEA logo suggestions, has received over 100 submissions, but a spokesperson for the organization has announced that it will not be revising its approach.

Last week Friday, Nigeria’s National Drug Law Enforcement Agency (NDLEA) announced a design competition as part of its ongoing efforts to reposition its brand.  The agency urged ‘young creative minds’ to take part in a contest to redesign its logo. However, following the announcement, the NDLEA faced backlash from many Nigerians, particularly established professionals in the creative industry, who saw the contest as a means to exploit younger talent.

Coker Oluwafemi, a creative technologist, told The Republic that while creative crowdsourcing can generate ideas quickly, it is not the most effective method of designing a logo. Oluwafemi believes that ultimately, ‘this arrangement does more harm than good’ to the contestants, who are typically creatives, and local agencies. ‘It diminishes the value of creative work,’ he told me and felt that government agencies should seek out ‘capable creative specialists as they attempt their branding.’ 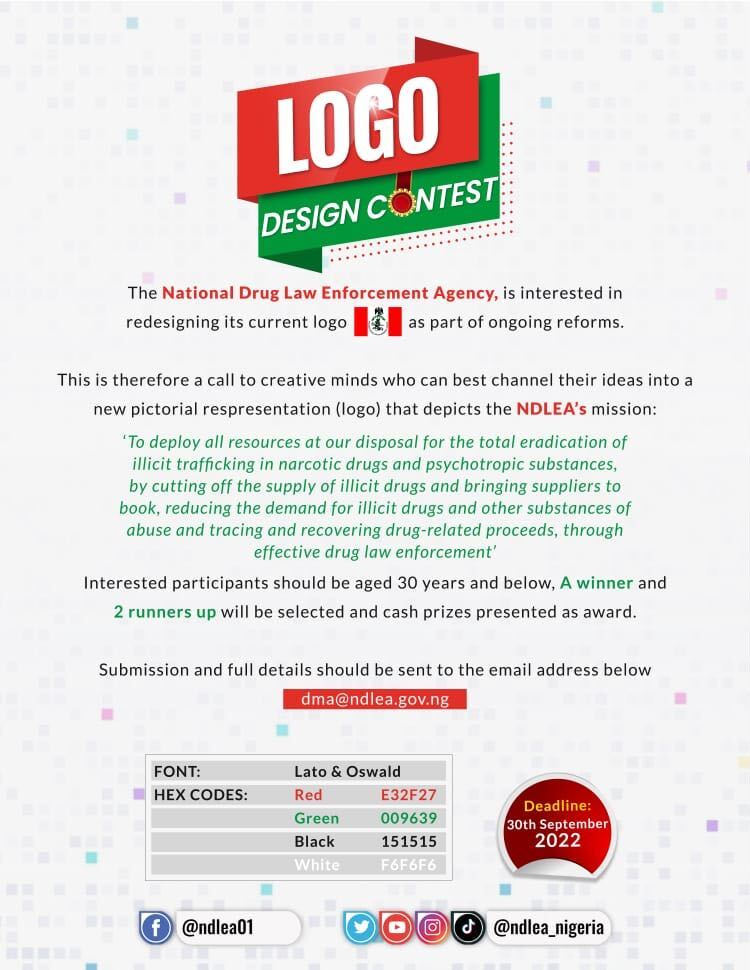 Creative crowdsourcing is complicated for both the brands or agencies commissioning these contests and the creatives that participate in them—especially as it hinges on volunteered work. In 2019, brand developer and product designer, Adedoyin Betiku, tweeted some logo recommendations he had for the Economic and Financial Crimes Commission (EFCC). While Betiku acknowledged that EFCC’s response to his tweet resulted in positive media coverage, the logo he recommended was not adopted, and he had no private interactions with the EFCC’s leadership following that period.

Betiku, who made his designs voluntarily back then, had made similar design recommendations for other agencies including the Independent Corrupt Practices Commission, the Nigeria Center for Diseases Control and the Federal Road Safety Corps. Though these institutions ignored his designs, like many young creatives, volunteering designs offered Betiku the promise of reaching a wide audience. Additionally, Betiku believed such designs could contribute to efforts to improve the presentation Nigeria’s government agencies within and beyond Nigeria.

Betiku, however, no longer believes in offering unsolicited, free designs. He may have felt differently in 2019 but today he also considers contests such as NDLEA’s particularly exploitative. ‘Most of the time, actually, especially for these government agencies, they already have who they’re going to use. They’re just pushing this out as some form of publicity stunt, or maybe they want to cut down on ideas,’ he said. ‘This happened to me in my early days as a designer, when I was jumping on literally every design contest.’

Oluwafemi agrees and believes that a collaborative approach would have been a better way for NDLEA to seek a rebrand. ‘Collaboration fosters creativity, while crowdsourcing discourages collaboration,’ he told me. According to Oluwafemi, ‘Even though crowdsourcing provides budding designers with a platform to create practice logos, they are not the best way to spark creative work that measures up to expectation.’ Absent effective collaboration, designers learn little about the agency’s expectations raising the likelihood that they underperform. ‘And beyond the agency providing their mission and font choice,’ Oluwafemi explained, ‘the designers cannot tell how the logo will be applied or what constraints must bind the project.’ Because information is limited, designers are less likely to produce meaningful work.

While many have suggested that NDLEA should have sought professionals, NDLEA spokesperson, Femi Babafemi, told The Republic that two major reasons they decided to start the design competition were ‘to get the young generation involved as part of our advocacy drive and at the same time to get their buy in into the war against drug abuse.’

Babafemi emphasized that NDLEA is using ‘one stone to kill two birds,’ and that the institution primarily wants to create an opportunity for young people to understand what NDLEA is about. NDLEA’s contest offers cash prizes for winners but the actual sum of these prize is not disclosed, fuelling scepticism among the public. In response, Babafemi told The Republic that ‘whatever is going to be paid will be something commensurate with the work done and with the intellectual property.’

In response to demands for more transparency, Babafemi explained that critics don’t understand the objectives behind NDLEA’s contest. According to Babafemi, so far, the contest has received over 100 submissions. ‘[NDLEA] will flow with the majority of those who are interested,’ he said. ‘There will always be dissenting voices in [contests] like these, but we will flow with those who are genuinely interested and have submitted their design.’

Oluwafemi disagreed with this approach and felt NDLEA could have been more thorough in designing its contest. ‘NDLEA should have started by searching for a capable brand designer or collective,’ he said. ‘They should have then reviewed the work these creatives have done in the past and asked the designers questions about their approach.’ After finding a winner, he argued, NDLEA could then ‘provide the chosen designers with context; updating them on what the project constraints are and the various ways the logo needs to be applied.’ Oluwafemi felt such an approach was ‘the recipe for creating work that enables creative consideration while respecting the objectives and ambitions of the government agency.’

The NDLEA spokesperson emphasizes that the winner will benefit from the contest’s publicity and will have the opportunity to have their name etched in the history of the organization and Nigeria as a whole. Onyinye Dike, art director at The Republic, however, felt that ‘regardless of the ‘publicity’ a designer may (or may not) receive from undertaking a project, designers should always be adequately compensated for their skills and time.’ According to Dike, that the contest is aimed at designers under the age of 30 creates an understandable suspicion of exploitation under the guise of ‘standing a chance of winning and making history’.

Contests like these are not unique to NDLEA, and Nigeria but are part of a global issue of undervaluing creative work and exploiting the creator economy. Earlier this year, in the UK, for instance, the West of England Combined Authority announced a competition to redesign its transportation logo and offered publicity as the prize. In response, professionals launched a social media campaign demanding that creatives boycott the competition⎈

Here are some more Republic articles to read: