William Ruto gives a speech after he was declared the winner of Kenya’s 2022 presidential election in Nairobi, Kenya, on 15 August 2022. WILLIAM SAMOEI RUTO / TWITTER

Recent presidential elections in Kenya have generated controversy, and the 2022 edition—won by deputy president William Ruto—was no different.

One week ago, on 15 August 2022, Kenya’s Independent Electoral and Boundaries Commission (IEBC), announced that William Ruto, of the United Democratic Alliance (UDA), had received the most votes in the presidential election held on 09 August. Ruto, the incumbent deputy president, polled 7.17 million votes (50.49 per cent) to beat perennial presidential candidate and former prime minister, Raila Odinga, who received 6.94 million votes (48.85 per cent).

Recent presidential elections in Kenya have generated controversy, and these elections were not different. Before the declaration of the results, four of the seven commissioners that preside over the IEBC refused to endorse the announcement. The vice-chairman of the IEBC, Juliana Cherara, explained that they could not officially acknowledge the results because of a lack of transparency during the elections. Cherara claimed the total voter percentage won by the four candidates was ‘a mathematical absurdity that defies logic’. Reports emerged of fighting at IEBC collation centres, as some party supporters rejected the polling numbers before Wafula Chebukati, the IEBC chairman, announced the official results.

The presidential election had been contested by four candidates, but only two consistently dominated election polls. Ruto’s victory was despite losing the support of incumbent president, Uhuru Kenyatta, who Ruto had served as deputy since their election in 2013. The two fell out in 2019 after Kenyatta and Odinga, rivals who had contested the 2013 and 2017 elections, joined forces and proposed a series of constitutional amendments that would have seen Odinga become president and Kenyatta assume a prime ministerial role. The proposal, named the Building Bridges Initiative, was eventually thwarted by the Kenyan Supreme Court as Ruto and his allies left the ruling coalition and formed the UDA. Early this year, Kenyatta and Odinga formalized their alliance through a new party called ‘Azimio La Umoja’, and the outgoing president endorsed Odinga to replace him.

After the election results were announced, Odinga called a press conference and harshly criticized the IEBC’s management of the elections. He also declared that he would challenge the result ‘using all constitutional and legal options’. The presidential candidate accused the endorsing members of IEBC electoral commission and its chairman of illegal conduct. He posted on his official Twitter page:

The figures announced by Mr. Chebukati are null and void and must be quashed by a court of law. In our view, there is neither a legally and validly declared winner nor a President-Elect.

Odinga’s loss is the latest in his quest to become president, and his reaction to the result is not surprising. The son of Kenya’s first vice-president, Odinga had contested for the Kenyan presidency—and lost—on four different occasions in 1997, 2007, 2013, and 2017. In 2007, protests broke out in Nairobi after Odinga disputed the results of the presidential elections and sparked allegations of voter fraud. Over 1,100 Kenyans were killed during protestor clashes with police after Odinga claimed that the results were rigged by ‘as much as 300,000 votes’. In the 2013 election, when President Kenyatta first took power, Odinga filed a petition with the supreme court alleging that the IEBC had rigged the election in Kenyatta’s favour.

After another defeat in the 2017 presidential election, Odinga asked Kenya’s supreme court to annul the results, claiming that the IBEC’s electronic electoral systems had been hacked to rig the results. In a surprising ruling, the supreme court declared the results of the election invalid and ordered the IBEC to hold a new vote. However, Odinga withdrew from the running and asked his supporters to boycott the election rerun. Kenyatta won re-election.

President-elect Ruto’s win, in his first attempt at the presidency, was especially surprising because Odinga had been directly endorsed by President Kenyatta and also had a long history in the presidential race. As Ruto campaigned for office, he spoke of his humble beginnings attending school barefoot and selling chicken and groundnuts in rural Kenya. Describing himself as the ‘son of a nobody’, Ruto promised to make Kenya a country that worked for everyone, rich or poor. He called the IEBC and its Chairman, Chebulati, the ‘heroes of the election’ during his acceptance speech, commending the electoral body for the transparency of the elections. Last week, the Elections Observation Group (ELOG), an independent election monitoring group, released a statement concurring with the IEBC’s election results. 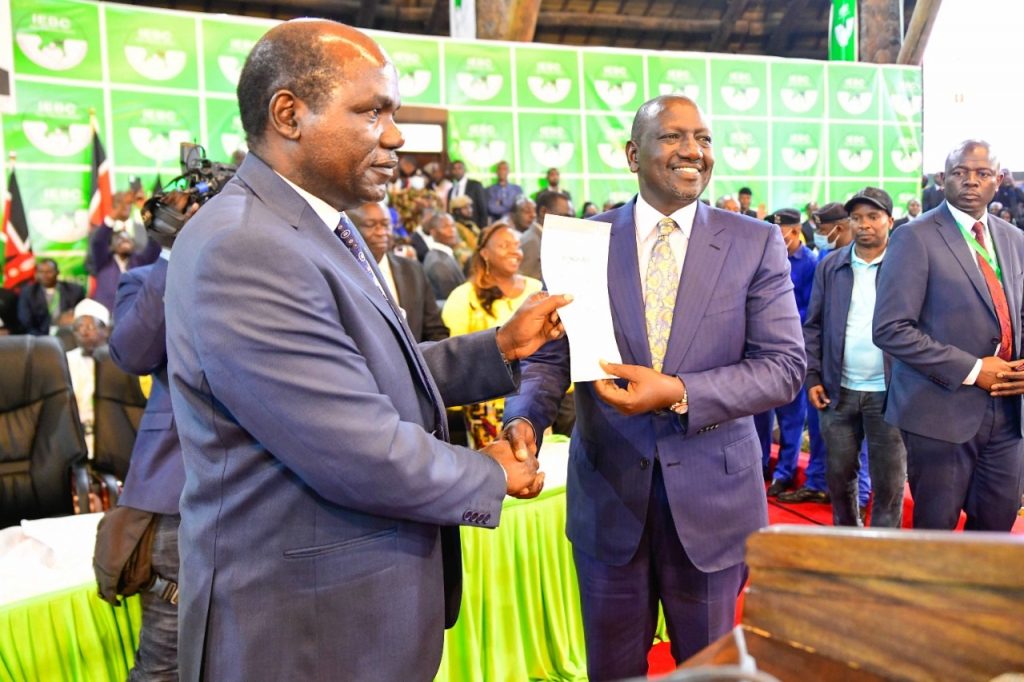 Despite Odinga’s criticisms, others have praised the conduct of the IEBC. Two Kenyans based in Nairobi, Edwin Chege and Andrew Kimani, thought the elections went smoothly despite tensions from Kenya’s past electoral experiences. Kimani said the result of the presidential election was fair, because ‘president-elect Ruto’s alliance, the Kenya Kwanza Coalition, also won a [narrow] majority in the national assembly and senate elections.’ According to Kimani, ‘if something was wrong it would be out in the open.’

Speaking to The Republic, Chege disputed the allegations of election mismanagement, explaining:

I believe these were some of the most credible and transparent elections we’ve had as a country. What is of more concern to me is the behaviour of agents from the losing party as the presidential results were about to be announced, as well as attempts to question the credibility of the tallying process without providing evidence of their claims.

Other Kenyans have spoken against the prospect of a Ruto presidency, highlighting the president-elect’s role—along with President Kenyatta—in the 2007 election crisis and subsequent charges by the International Criminal Court. Some Kenyans I spoke to in writing this piece argued that a Ruto’s presidency simply ‘meant more of the same for Kenya’—Ruto has been deputy president of Kenya since 2013.

Yesterday, Azimio La Umoja’s legal team filed a petition with the Supreme Court of Kenya against Ruto, the IEBC, and the seven members of the IEBC’s electoral commission. The petition was filed on behalf of Odinga and his running mate, Martha Karua. It alleged that the conduct of the IEBC and its leadership during the presidential election was fraudulent and unconstitutional, and asked the court to void the results. The Supreme Court has two weeks to issue a verdict. 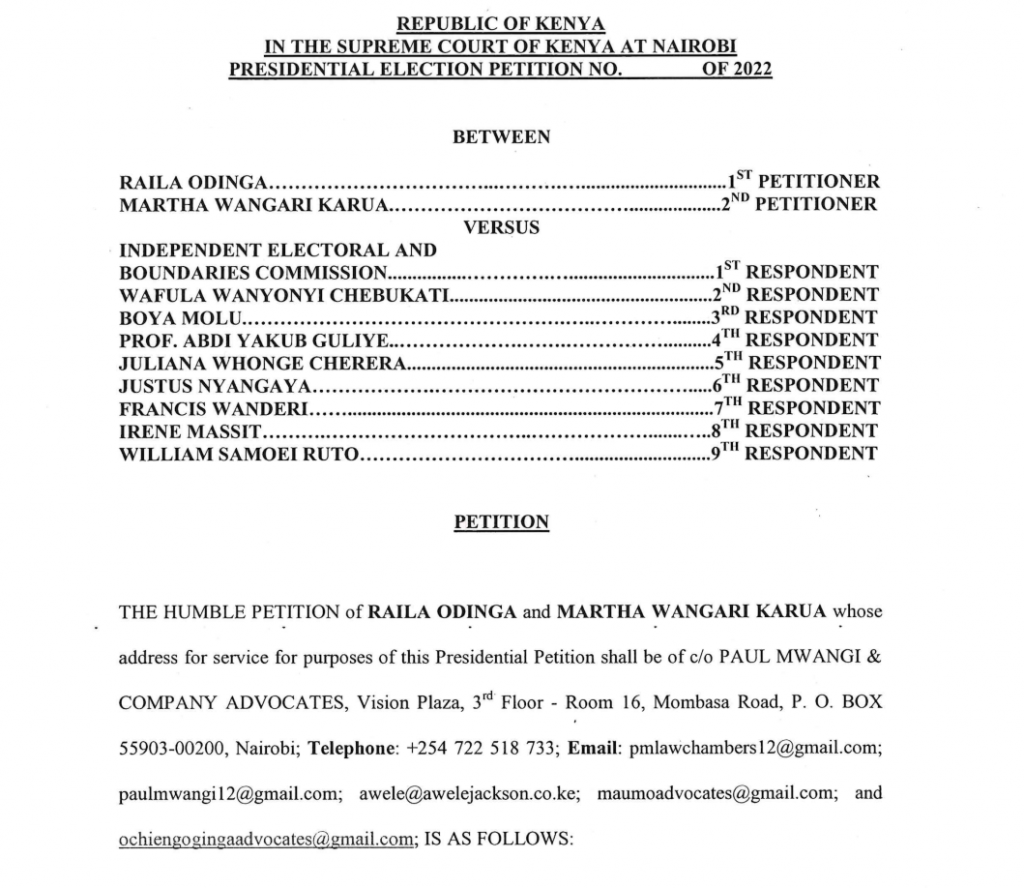 The front page of the petition filed by Azimio la Umoja’s legal team against the IEBC, its leadership, and president-elect William Ruto.

Following the 2022 election, so far, there have been no recurrences of the violence that marred the aftermath of previous polls. A government committee to plan the inauguration has already started work in preparation for the transition. However, President Kenyatta has yet to speak on the election or acknowledge his deputy president’s victory⎈

Here are some more Republic articles to read: