On Policy Reluctance and Economic Peril Nigeria and the AfCFTA

Africa is often referred to as a sleeping giant due to the continent’s enormous yet underutilized intra-regional trade potential. But recent efforts to promote intra-regional trade in Africa have met misguided reluctance from its largest economy, Nigeria. Currently, intra-African trade is only 16 per cent of the continent’s overall trade, compared to 50 per cent intra-Asian and 70 per cent intra-European trade. Meanwhile, the continent is home to 1.2 billion people, providing a huge market for African businesses. Analysts predict that by 2030, Africa will have a combined consumer and business spending of $6.7 trillion.

One of the major challenges facing African businesses has been the difficulty of tapping into other African markets due to poor infrastructure, complex trade barriers and administrative bottlenecks. These challenges have made it difficult for African businesses to achieve economies of scale and benefit from learning by exporting, which occurs when firms become more productive by exporting goods abroad. According to a report by the Brookings Institution, greater intra-African trade will not only strengthen product value chains but will also facilitate technology diffusion and knowledge sharing across the continent. In addition, increased intra-African trade will stimulate infrastructure development and attract foreign investors.

In a move to bolster intra-African trade, the African Union recently initiated the Africa Continental Free Trade Area (AfCFTA). The AfCFTA is poised to be the world’s largest free trade zone and aims to “create a single continental market for goods and services, with free movement of persons and investments”. Although the deal was widely accepted across the continent, several countries including large economies like South Africa and Nigeria showed reluctance. While the former has recently ratified the deal, the latter has yet to make meaningful progress in endorsing it.

The Missing Lion of Africa

When the opportunity for free trade among African countries emerged, one would have expected the continent’s largest economy, Nigeria, to be a pioneer not only in swiftly ratifying the deal but also in rallying other smaller countries to follow suit. Unfortunately, that was not the case. Nigeria’s president, Muhammadu Buhari, abruptly cancelled his trip to Kigali, where 44 other African leaders signed the ground-breaking deal in March 2018, already indicating his reluctance to support the deal. 9 months later, Nigeria has yet to sign the deal, citing reasons that are neither justified by sound economic theory nor by trade realities.

In Nigeria, the AfCFTA has faced resistance from both the central government and organized unions such as the Nigerian Labour Congress (NLC) and the Manufacturers Association of Nigeria (MAN). The primary reason offered by Nigerian officials for their scepticism has been based on flawed economic analyses. It revolves around the fear that the deal will cripple indigenous businesses, turning the country into a “dumping ground”. According to Femi Adesina, the special adviser to the Nigerian president on media and publicity, the president “would not want to agree to anything that would hinder local entrepreneurs”. Adesina also stated that the president backed off from signing the deal because it “could encourage the dumping of finished goods in Nigeria”. I find these reasons both flimsy and elusive.

Recently, Nigeria’s special adviser to the president on economic matters, Adeyemi Dipeolu, announced that Nigeria is not in a hurry to sign the free trade agreement, and that “only what would benefit the country [will be] implemented as a policy”. What is more problematic was his remark that “we have to look at the current theory to influence our trade policy”. As a teacher of international economics, I have yet to come across any sound theory that could justify his government’s reluctance to sign the AfCFTA because the underlying assumptions and outcomes of most theories predict that gains from free trade far outweigh the losses. Indeed, trade theories, ranging from the traditional Ricardian model of the early eighteenth century to the contemporary ones such as Nobel laureate, Paul Krugman’s New Trade Theory, suggest that free trade would not only eliminate inefficiency losses caused by protectionism, but would also bring forth economic benefits in the form of greater economies of scale and increased competition and innovation.

Nevertheless, opposition from organized unions towards the free trade area is based on an outdated protectionist ideology and the notion that these unions were not “adequately consulted”. The NLC opposed the deal on the grounds that it was a “dangerous and radioactive neoliberal policy” and called for increased consultation with the union. Theirs is a flawed position, however, given that, far from being an externally-imposed neoliberal agenda like the infamous Structural Adjustment Programme of the 1980s, the AfCFTA was designed and proposed by Africans in order to benefit the continent as a whole. It is deeply ridiculous to interpret the free trade area as neoliberal “foreign interference” as this case is different.

Although President Buhari had set up a committee since March 2018 to conduct “intensive and extensive consultations” with the aim of ensuring a “free and fair” trade agreement that balances national interests and regional obligations, there has been no any meaningful outcome to date. This signifies the slow pace of decision-making on an important issue especially considering that the deadline for signing the deal is only a few months away.

The reasons echoed in Nigeria for opposing the deal are mistaken in fundamental ways. In economics, dumping occurs when a firm charges a lower price abroad that at its home country in order to capture larger global market share. As a result, countries whose local enterprises lose out to foreign dumpers resort to protectionism by slapping tariffs on the imports in order to ensure fair prices. Historically, the dumping argument has been employed by developing countries in order to protect their “infant industries” from fierce competition by technologically advanced producers in developed countries. As such, “dumping” is a development opposition that does not hold in the present AfCFTA situation, which involves only African countries, among whom there are no substantial gaps in manufacturing efficiency as shown in Figure 1. 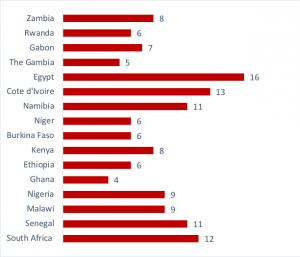 Although Nigerian officials are sceptical of the AfCFTA, the deal, arguably, provides substantial economic opportunities for Nigeria as well as other African countries. Intra-African trade is not necessarily a zero-sum game, where select participants can only benefit if others lose out, but can be a win-win situation where all African countries benefit together. For Nigeria, the free trade area provides a unique opportunity for local businesses and tech start-ups to prosper by tapping into other African markets easily, thereby creating jobs and promoting economic diversification, which are central to the government’s recent Economic Recovery and Growth Plan.

Far from being a dumping ground, Nigeria could potentially become a magnet for foreign investors who would be attracted not only by its huge population and economic size but also by the possibility of easily accessing other countries across Africa. On the other hand, opting out from the deal would signal future risks and uncertainty to investors who are willing to benefit from larger African markets and stronger intra-African trade. As result, Nigeria would potentially miss future foreign direct investments to other more outward-oriented African destinations.

Nigeria should play a crucial role in making this deal a success not only for the economic benefit of Nigerians but also to bolster Nigeria’s strategic role as Africa’s largest economy and powerful actor. If it fails to do that, other countries will take lead, making Nigeria the isolated giant of Africa and excluding Nigeria from being involved in critical decisions that will shape the continent’s future.

Rather than stoking up irrational fears of domination from smaller economies, Nigeria should vigorously move on to provide an enabling environment that will facilitate its structural transformation while consolidating its regional competitiveness. This will require overhauling its institutions, revamping its infrastructure, implementing business-friendly reforms as well as providing incentives for exports. In this regard, Nigeria could learn a valuable lesson from Ethiopia.

The Ethiopian government, for instance, has recently been allocating over half of its budget to infrastructure development in critical sectors such as power, transport and education. This has led to the construction of Africa’s largest hydroelectric plant, The Renaissance Dam, and the longest electric rail network connecting Addis Ababa and several industrial zones to the port of Djibouti, thereby facilitating exports. The government has also strengthened institutional capacities in order to reduce impediments to the private sector and ensure conducive investment climate.

Through its outward-oriented industrial policy, Ethiopia has facilitated its integration into the global value chains (GVCs) in labour-intensive industries with significant linkages to agriculture such as textile and leather manufacturing. This has attracted foreign manufacturers. Overarching reforms like these rather than protectionism have made Ethiopia one of the fastest growing economies in the world with a burgeoning industrial base. There is little doubt that similar reforms, starting with the ratification of the AfCFTA, if applied to Nigeria, can have similar, if not broader impacts⎈