I grew up wanting to get closer to God. But to find God I had to leave religion behind.

I remember the first time I began to doubt God’s love for me. I was a nine-year-old Catholic primary school student and it was the season of Lent. Crucifixes draped in purple fabric hung on our classroom walls; teachers sternly warned us against making noise. It was Friday—on Fridays, at the end of classes but before the school closed, we always assembled in front of the classrooms for the Stations of the Cross. The school hung 14 images of Jesus Christ at different spots and we walked around all of them.

The Stations of the Cross are a Catholic meditation, prayed every Friday during Lent to honour the passion of Christ from his condemnation by the Roman governor, Pontius Pilate, to his crucifixion. In awe, I watched the priest and the mass servers; how immaculate they looked. Secretly, I wanted to be like them, to be that close to God and to love and serve him wholeheartedly.

Standing at the first station, looking up at the picture of Pilate sentencing Jesus to death and listening to the melancholy Latin songs reverberating off the walls, brought me closer to Jesus’s pain. I remember pressing my eyes together to stop the tears. My feelings of awe soon descended into guilt. I felt like my sins were the reason that Jesus had to pass through such an inhumane journey.

After the Stations of the Cross, I hung around in a school corridor, wondering what was behind a carton-coloured door behind a nearby staircase. The only thing I knew about the room behind the door was that it was reserved for the mass servers, who were schoolmates that helped in organizing mass in the chapel.

I was still lurking around the door when it opened and one of my classmates, Nnaemeka, emerged. I rushed to tell him that I wanted to enter the room.

‘You can’t enter there. It’s for mass servers only,’ he said.

‘But I would love to join and serve mass,’ I told him.

‘You’ll have to stop behaving like a girl first,’ he replied. Then he went downstairs with the smooth fabric of alter albs resting on the crook of his arm.

I do not remember how long I stood there, feeling my heart fold into itself, but I remember crying silently as he walked out on me.

Years later, I would get several opportunities to serve mass and I would turn down each one because when I wanted to serve the most, I was made to feel unworthy.

After that encounter with Nnaemeka, I embarked on a journey of interrogating my faith. In my early Christian life, I had learned that my purpose was to please and serve God in order to enter his kingdom—a place bereft of pain, where there would be joy and singing. That if I did not live up to this purpose, I would face the eternal gnashing of teeth in hell.

Hell petrified me. At five, hot tea had spilled on my thighs. My dad had filled my cup with hot water and when I lifted the cup, the liquid spilled. It burned for days, and I had to sit outside under the shade of a tree, with milk poured on my thigh and a cold towel pressed lightly on it to soothe the pain. But the scars lasted through my teenage years, and I relived the trauma every time I looked at myself in the mirror.

Once in my catechism class, a woman trying to conceptualize the pain of hell, compared it to hot water spilling on the skin. When I thought of the scars on my thighs, I wondered, always, how I could forever stay out of sin. Because in hell there would be no milk or towel soaked in a cold water to soothe my wounds. When Nnaemeka denied me from becoming a mass server, I felt undeserving of God’s presence because of my mannerisms. I lost God and spiralled into a spiritual crisis. 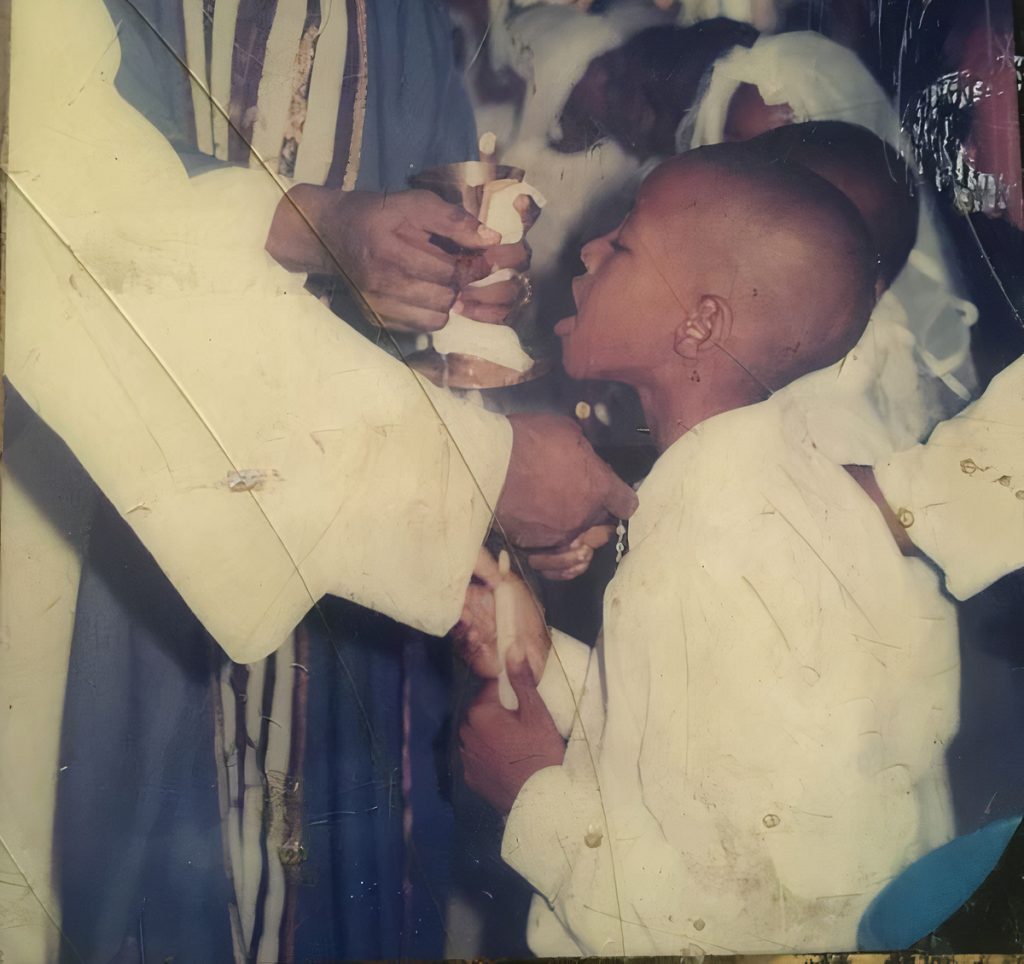 The author in January 2004 during his first holy communion. © UGOCHUKWU DAMIAN

For as long I can remember, my body has been soft. My mannerisms, my walk, my gesticulations were not like the other boys’.

In nursery school, my conventional school bag bored me. I wanted the shiny kinds like my mother’s bags but when I took one of her plain handbags to school, my classmates pointed at the bag and laughed at me. I learnt shame this way and I began to fold away, to notice that my desires were not valid in the society I was in. Later, it would occur to me how cruel the children I grew up with were, and how averse we were to difference and diversity. My desires and the shame I held for them made me again question my identity with God: Why had He made me a laughingstock and the object of my peers’ bullying? Why had He made me vulnerable to femmephobia in such a hostile community, where people often threatened to beat and push me out of spaces? Recollecting my childhood now, I think of poet, Doc Luben’s words: How do we forgive ourselves for all the things we did not become?

1st Corinthians 6 vs. 9: ‘Know ye not that the unrighteous shall not inherit the kingdom of God? Be not deceived: neither fornicators, nor idolaters, nor adulterers, nor effeminate, nor abusers of themselves with mankind.’ Reading this passage at 14 in my mother’s Bible, and learning that being effeminate was a sin and that effeminate men did not deserve to enter God’s kingdom, I cried. The next day, I thought of ways I could bridge the gap between me and God. Hell still terrified me, so I started to Google several religions and their stances on effeminacy. Searching through different religions was like picking a wound. Every religion I found had stringent and, sometimes, even worse rules on excluding effeminate men from society and their version of God’s kingdom. I decided then that I could never worship a God who did not care about me. Thoughts of atheism were heavy on my mind. Eventually, I learned about agnosticism and settled on that, partly because it was difficult navigating this world without the idea of a supreme being I could cast my burdens on.

As an agnostic, I tried to modify my religious beliefs, tilting towards anything that included me.

I thought of pre-colonial Igbo spirituality—the concept of Chukwu, Chi and Arusi, which my forefathers practised, but I was cautious about exploring it in depth. Society had deemed traditional spirituality evil and shameful.

Then, Chinua Achebe’s Things Fall Apart came to mind, and I began to see the Igbo pre-colonial religion through a different lens. In the book, Chinua Achebe wrote about the characters, Mr Brown (a White missionary) and Akunna (a respected man in Umuofia); about how neither of them succeeded in converting the other but learnt about their different beliefs. Akunna had agreed with Mr Brown on the idea of one supreme God, which he called Chukwu and who made the world and other gods, but Mr Brown disagreed and suggested, instead, that Chukwu was the only God and all others were false. He pointed to a carved wood in Akunna’s obi, asking if he called it God. A piece of wood?

Akunna stated that the wood carving and other smaller gods Chukwu made were Chukwu’s messengers. ‘He appoints the smaller gods to help Him because His work is too great for one person,’ Akunna said. He also explained the smaller gods and Chukwu’s relationship as similar to approaching a great man through his servants; such that when the servants fail us, we have to approach the great man directly…

It is drizzling outside now, and I am sitting at my desk. Behind me is my small shelf stacked with African literature.

I think now of the conversation between the two characters in Things Fall Apart. I love the person and idea of God. I go back and forth around thinking of Him as a loving father, just like any other concerned father, and the idea of the pre-colonial Igbo spirituality makes more sense—the fact that Chukwu sends you a personal spirit to guide you through life.

I now think of God differently. And maybe like the character Akunna suggests, there’s only one God. I also try to believe that there are different ways to approach Him—personally, through Christianity, Islam, Judaism, Hinduism, etc. I imagine God as a starfish and the many spines projecting out of it as the different means of approaching Him. And because of this, I’ve carved a personal niche through which I access God, and I believe that my route is free from all the discrimination I have faced in life⎈