Six years after a group of Cambridge students first demanded that the Benin Bronze cockerel, ‘Okukor’, be returned to the Benin Kingdom, the university returned the cockerel. For some of those activists, including this author, the return means victory but also worry.

Editor’s note: This essay is available in our print issue, A New Chapter for African Artefacts?. Buy the issue here.

In November 2015, when Amatey Doku and I first discussed the repatriation of the colonial loot that sat in our college dining hall, I don’t think we had any idea what we were getting into. But six years on from when we first presented our case, in October 2021, the Benin Bronze cockerel (or ‘Okukor’), finally went home. This is a story of the emotional toll of going up against an 800-year-old institution: the University of Cambridge.

Our newly formed campaign group didn’t really get along initially. But deep down, we knew each other’s combined contributions as classicists, social scientists and young African art aficionados were essential for us to make a good case. As part of our digging, we invited a man called Mark Walker to dinner in the same dining hall where the cockerel sat. His grandfather, Captain Herbert Walker, was a British soldier who was part of the 1897 punitive expedition to Benin and he had done extensive research into his grandfather’s loot, some of which he had already repatriated to the Benin Palace. The college got wind of his arrival and hastily took down the cockerel. I never saw it again before I left the university. First, we laughed at the extent of their overreaction but, for the first time, it dawned on me that this was a huge deal. And I was terrified. 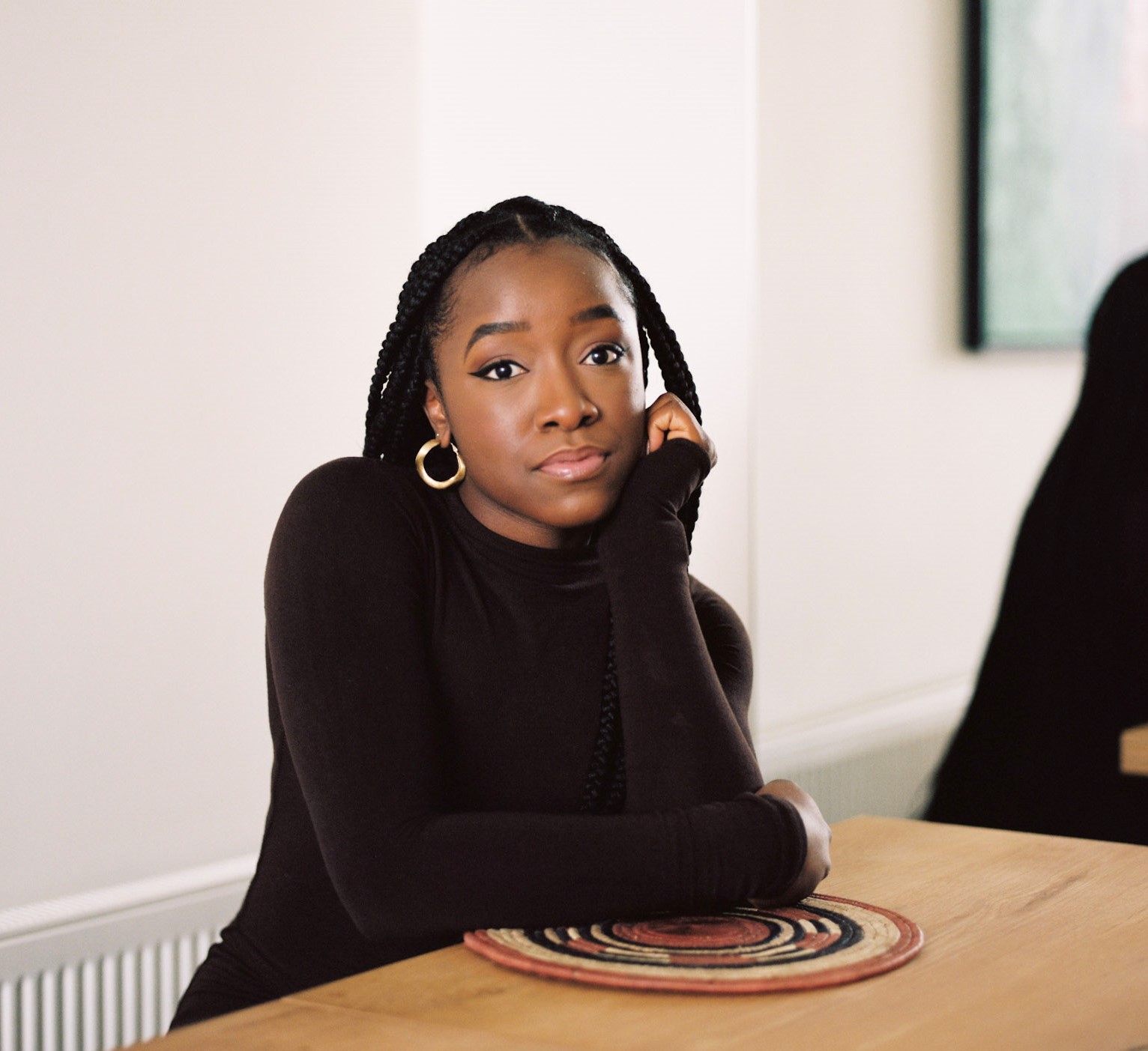 We were seeking a student mandate to ask the college to remove and repatriate the cockerel.  Days of in-fighting over the wording of the proposal culminated in an explosive student meeting—so explosive that I cried. It wasn’t a good look, but the very public squabbling forced some necessary refining to the proposal and our broader plan. The more radical part of the group showed up dressed as Black Panthers, arguing that the case we made for repatriating the cockerel must be purely moral. They were right, but I and others sought to appeal to the college a bit more pragmatically and show that a repatriation would be in the college’s material interests, too. The wiser me can now see how much of that decision was shrouded in fear: fear that we might be asking for too much, fear that the college authorities would see this as an attack, fear that unless we pander, we would be jeopardizing our futures at the college.

That we anticipated the college’s defensiveness made it no less jarring. In a meeting with the college council’s Ethical Affairs Committee, we sat across from a table of white senior staff and explained, politely of course, that a stolen car is no less stolen because you think you can look after it better than the car’s original owner. It is an argument that has been made repeatedly by Benin royals, and that we would be forced to repeat over the next few years, too. ‘But how will they look after it?’  one committee member asked. We had well-developed responses to all their questions but were never given straight answers in return. It was always too complex apparently, but to us it seemed rather simple: give it back.

In a move many would consider cowardly, the college handed off the decision to the university. (The University of Cambridge has a collegiate structure, so colleges like Jesus are effectively semi-autonomous subsidiaries, in charge of their own property, even though they fall under the umbrella of the university.) Our proposal was deliberately targeted at Jesus College specifically because we knew that they legally owned the cockerel, meaning that they could make an independent decision on its future. Over the next few years, we were met with the full force of the University of Cambridge’s bureaucratic heft, the kind that we suspected they hoped would exhaust us into backing down. We had meetings with pro vice chancellors, often without any clear purpose, and university museum staff, too. We would make the same, simple case again and again. We were effectively told in many words that Cambridge was not prepared to step out and set a precedent, even if it was the right one. The university hoped to tire us out, as they are well-positioned to do because students are only there for a few years. Put simply, it appeared that they didn’t care.

Our team dwindled as people graduated or eventually got bored of repeating themselves. I focused my time on my degree and other initiatives and it is fair to say that I gave up. People who had seen news clippings at the height of the campaign would ask me how it was going and emptily I would say things like ‘well, we tried.’  Amatey was the first to tell me about the cockerel and to involve me in this fight. He also became the last man standing, maintaining relations with the college and keeping abreast of updates, no matter how small.

I don’t know that the cockerel would have ever been repatriated if not for the academics who carried on the baton after we left. When we grew tired, they didn’t, and we are all indebted to them. Dr. Veronique Mottier, a sociology professor who was once my tutor at Jesus, was investigating the college’s links with slavery and colonialism alongside several others in a group called the Legacies of Slavery Working Party. They did an immense amount of research and inevitably had much more experience working within the boundaries of the institution than we did. There had also been a change of hands by 2022—Jesus College now had a Black master, Sonita Alleyne, a first for Cambridge. Finally, the issue of the cockerel’s repatriation seemed to have moved up the agenda. 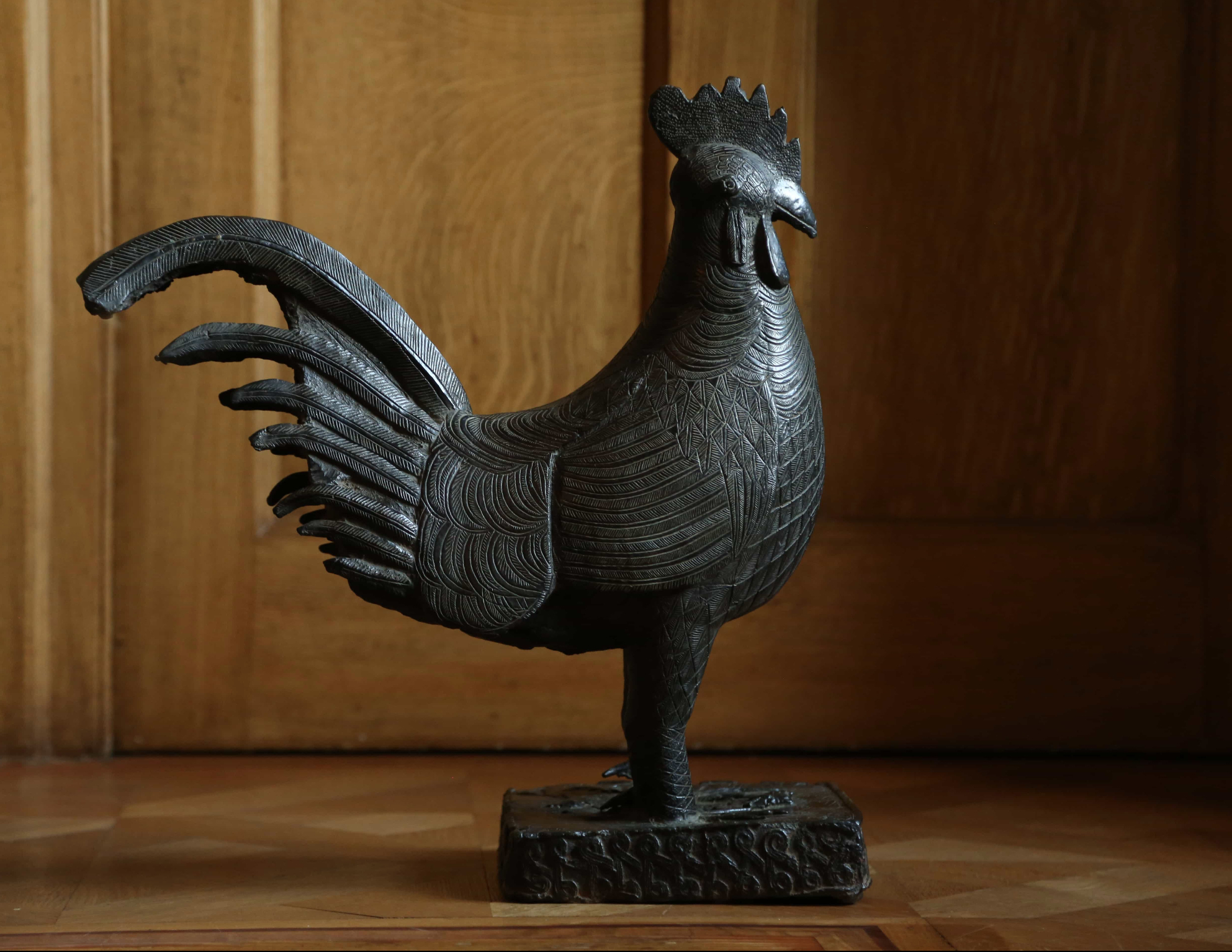 Three years after I had graduated, when I saw the announcement, in an email to alumni, that the cockerel was finally being repatriated, I was in shock. One of the earliest campaigners, Nadine Bachelor-Hunt, tweeted ‘I feel so emotional, the okukor is finally going home… Justice! British Museum – you’re up next!’. I had long stopped believing that it would happen anytime soon. Elation came next. Amatey had always felt optimistic that one day he would see the Jesus College Benin Bronze returned, but he didn’t think it would happen so soon after graduating.  Reacting to the news, Amatey and I’s messages were packed with exclamation marks. It is validating to know that our work wasn’t fruitless and there was a lot to celebrate, but the feeling was not what I had imagined it would be. The sense of victory was short-lived. The frustration of the early days resurfaced now coupled with anger. The same institutions who shuffled their feet for so long, who deemed this cause irrelevant for so long, who treated our plight like a niggling inconvenience for so long, were basking in the credit and goodwill that came with this two-step. ‘Jesus College becomes the first global institution to return a Benin Bronze to Nigeria,’, read one headline. ‘We are proud to be the first institution to simply act, to just do it.’, Sonita Alleyne said at the repatriation ceremony. The coverage framed Jesus College as the pioneers who opened the floodgates for institutional repatriations across the world.

That an 800-year-old institution changed its mind is not because we asked politely. The pressure was applied from everywhere. Racial discourse in the university and in British academia at large had moved on substantially and that, too, was as a result of years of hard, unrewarded work of Black students around access and admissions, decolonizing the curriculum and everything in between. The end result is a good thing and Black students, especially at Cambridge, are better off for it. But ultimately, the decision to repatriate the cockerel was made when it was convenient, when it fit into Cambridge’s broader agenda to rebrand as truly diverse, multicultural and forward-thinking. The credit that they get for it must be scrutinized through that lens.

I wasn’t invited to the cockerel’s send off. I, Amatey and colleagues that we hadn’t seen in years showed up anyway to say a proper goodbye. The occasion was emotional. Many representatives from the palace attended, including Oba Erediauwa, whose grandfather made some of the earliest calls for the restitution of looted Benin Bronzes across the world. As much as it was a celebration, the air felt sombre. Everyone had their own reflections. This was a fight that had been going on for the better part of a century, and we were only a tiny part of that story. After being gaslit into thinking we had no case for years—for the Benin royals, decades—the celebratory mood was soured. 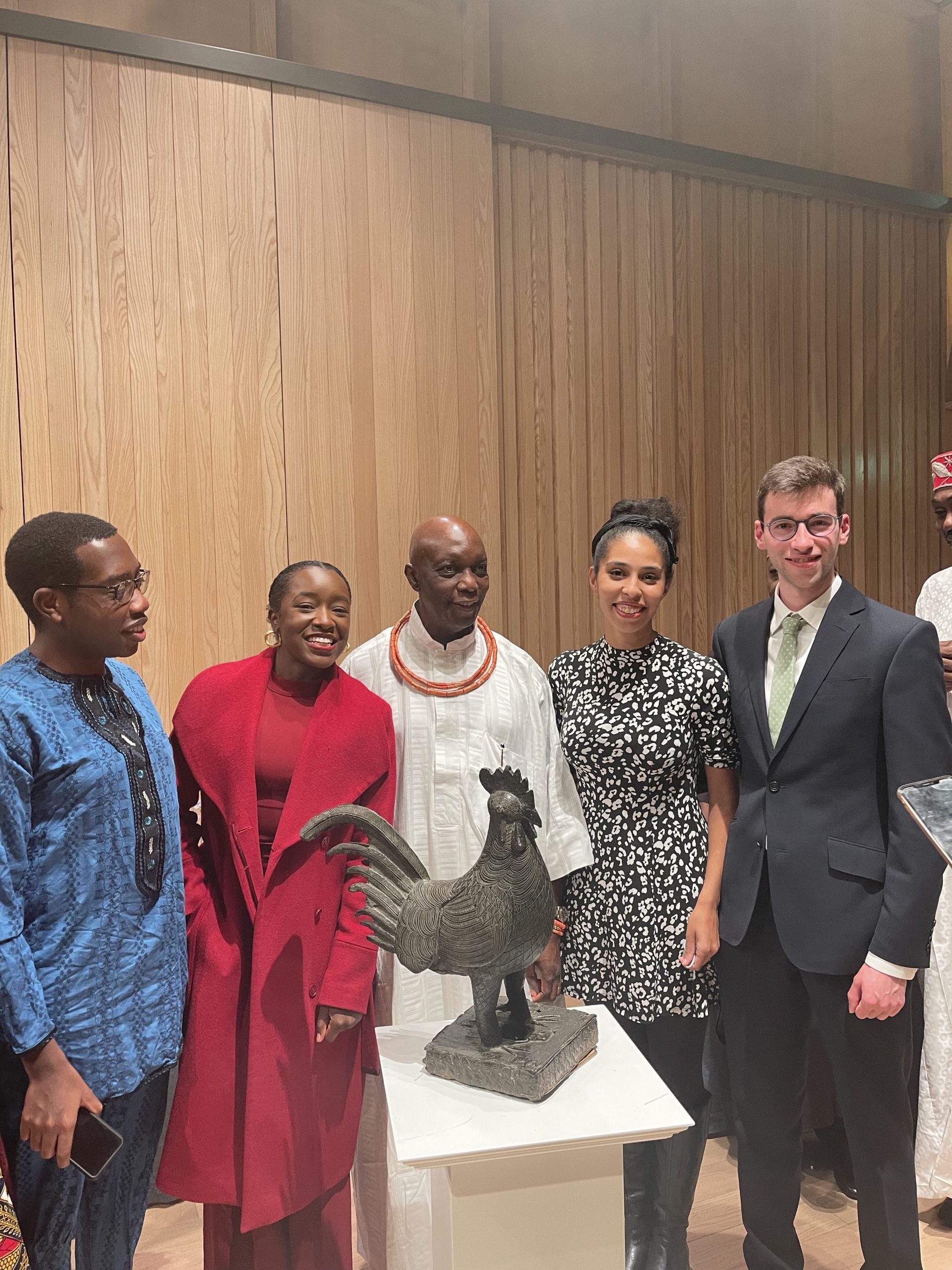 The victory is tinged with worry, fear even, but this time of a different kind. I have learnt that discourse around race can be turbulent, and progress isn’t always linear. It’s fragile. The idea that stolen African art should be sent home has become more broadly accepted, partly because something changed: people in powerful positions were changed, or the existing people changed their minds. History has shown us that these changes can just as easily go the other way. As is the case in much of Western societies, academic spaces are becoming increasingly polarized and as views from the right make their way to the centres, and progress on racial discrimination slows, I worry about what the future of this conversation looks like. Amatey’s background is in more traditional student politics; after graduating, he went on to work for the National Union of Students after the Benin Bronze campaign. In his words, our journey was ‘a clear example of the fact that fighting for change is often a relay. You will carry the baton for some distance, but it may come down to others to take it over the finish line. Your role in that broader race, is no less important than the final stretch, however.’

Repatriations of stolen African art have become more commonplace now and for the most part, it is a joy to see. Some of the events don’t even make headlines anymore. If you ask me, the question is as simple as it has always been: it’s not yours so you must return it. But there is a feeling that maybe our work here is not done, and I imagine that this is a feeling shared by many student activists everywhere (current or retired). If something that once seemed impossible can happen, then there is much more to hope for, to fight for. My mind often goes to the students whose campaigns didn’t get the same buy-in from academics after they left the university and are now left wondering ‘what if’?’. I hope that the story of this victory, albeit a fraught one, revives you and rekindles dimming fires. But I hope also that it prepares you for the complex realities that come with getting to the end. You may feel joy, relief even, but you will probably feel many more things, too. Your journey might not be smooth, but may it be worth it⎈