The 55th Session of the ECOWAS Authority of Heads of State and Government, June 2019. BAYO OMOBORIOWO/TWITTER

A Common Currency for West Africa Why ECOWAS Needs the Eco

Despite widespread scepticism towards the Eco, having a common currency in West Africa is not only a smart idea but also a huge step in the right direction towards regional development and stronger intra-African trade.

As globalization appears to be faltering elsewhere, evidenced by Brexit, the rise of populism in Europe, and the impending trade war between China and the US, African countries are becoming ever more integrated. On July 7, the African Continental Free Trade Area (AfCFTA) officially entered its operational phase, establishing the world’s largest free trade area. Despite its prolonged reluctance, Nigeria, Africa’s largest economy, has finally signed the deal—albeit at the last minute—leaving Eritrea as the only non-signatory on the continent. The AfCFTA seeks to eliminate tariffs on 90 per cent of goods and ensure free movement of labour in the region.

Last week, leaders of the Economic Community of West African States (ECOWAS) took a step further by announcing a common currency, the Eco, which is scheduled to be introduced in 2020. The Eco will initially be adopted in the West African Monetary Zone, consisting of six countries including Ghana and Nigeria. The aim of this gradualist approach is to promote macroeconomic convergence towards a single currency for the sub-region as eight other Francophone countries in the bloc are already using CFA franc as their currency. While the idea for establishing a currency union in West Africa has been present since 1999, a lack of political commitment and structural difficulties have prevented the implementation of a single currency in the region. Yet, realising the full potential of economic integration in the sub-region is only possible if a single currency is adopted among member countries.

Nonetheless, theory and evidence suggest that implementing a single currency has pros and cons. The optimum currency area theory states that countries within a free trade area should form a currency union in order to achieve optimum economic efficiency. The rationale is that adopting a single currency will facilitate regional trade, promote economic stability and ensure a monetary union that benefits citizens and industries of member countries. However, this greatly depends on there being free movement of labour and capital, strong integration of financial markets, and a system of fiscal insurance among member countries.

And yet, adopting a single currency requires each participating country to surrender its monetary policy to a regional central bank, thereby denying domestic monetary authorities the ability to tweak interest and exchange rates to achieve macroeconomic objectives such as price stability and economic growth. This can be problematic if and when countries are not at similar stages of their business cycles, as the cross-country heterogeneity would make a general response ineffective. A case in point is the recent Eurozone crisis which had dissimilar effects on European countries, making it difficult for the European Central Bank (ECB) to rescue some countries such as Greece and Spain from facing severe economic downturn by lowering interest rates. The challenge is that while some countries might need expansionary monetary policy to boost growth, others might demand tighter policies in order to tame inflation, thereby making a one-size-fits-all monetary policy ineffective. Indeed, empirical research has linked this lack of monetary policy independence to the deterioration of economic crisis in Greece, where the rate of economic growth still lags at below 2 per cent.

Challenges Ahead of the Eco

Currently, the West African bloc faces several challenges that need to be overcome in order to ensure the smooth implementation of a currency union. Foremost in overcoming these challenges has been the ECOWAS convergence criteria, which oblige member countries to meet conditions such as maintaining inflation rates below 5 per cent and achieving budget deficit-to-GDP ratios of 4 per cent. To date, no country in the bloc has fully met such stringent conditions.

Among the countries set to adopt the Eco by 2020, inflation rates are higher than the benchmark, the exception being Gambia where the inflation rate stood at 6.5 per cent, as at 2018. As sovereign debt is rising in most African countries, thanks to insufficient tax revenues and a deluge of Chinese loans, the required debt benchmark also seems elusive. Currently, debt-to-GDP is a staggering 105 per cent in Gambia and the ratio is much higher than 20 per cent in all ECOWAS countries. Although ECOWAS provides scenarios that allow for gradual integration as countries meet the criteria, it is almost impossible for the currency union to kick off in 2020. Therefore, revising the criteria to reflect more feasible targets for member countries is requisite for forming the currency union in 2020.

Inflation Rates across West African Countries Planning to Adopt the Eco by 2020, as at December 2018 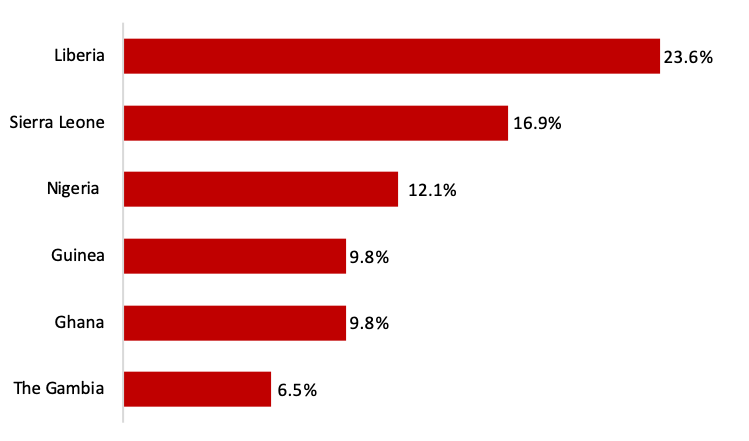 In addition to high inflation rates, trade is abysmally low within the West African sub-region. A new report by the National Bureau of Statistics indicates that imports from Asia accounted for 44 per cent of Nigeria’s total imports between January and April 2019 compared to only 17 per cent from Africa. Unsurprisingly, the value of Nigeria’s imports from China is 35 times more than its combined imports from 15 countries that form ECOWAS within the same period. Factors such as lack of industrialization, poor infrastructure, non-tariff barriers, and inefficient customs significantly inhibit intra-regional trade in the bloc. Thus, establishing a common currency would fail to achieve its purpose unless trade relations are strongly augmented the sub-region.

Another often overlooked yet crucial requirement to the success of a common currency is widespread support among citizens, enterprises and civil societies. Adopting the Eco would have significant implications for West African economies extending beyond simply ceding monetary policy independence to potentially disrupting economic activities, with unpredictable consequences on the welfare of citizens and enterprises. Without adequate consultation and popular support, this is likely to ignite opposition from the society and unions, thereby hindering successful implementation of the monetary union. For instance, organized unions such as the Manufacturers Association of Nigeria and the Nigeria Labour Union vehemently opposed timely ratification of the AfCFTA due to lack of proper consultation with them and the fact that the deal might cripple indigenous businesses. As I have argued in an earlier article, their arguments were neither justified by sound economic theories nor by current realities. Nevertheless, they succeeded in preventing the Nigerian President from signing the deal for more than a year. For similar reasons, understanding public opinion ought to be thoroughly considered when forming a currency union.

A recent article published in the Journal of Economic Integration finds that expected improvements in the economy and trust in the East African Community (EAC) increase support for the East African Monetary Union (EAMU) among Kenyans, while previous failures to introduce a single currency in the bloc negatively affects public support. Moreover, the research shows that while Kenyans are comfortable sharing a common currency with Tanzania and Uganda, they are sceptical of Rwanda and Burundi, due to factors such as political stability, language barrier and economic size. The EAMU experience, therefore, stresses the need to appropriately consult with unions and also pay attention to public opinion in order to devise strategies for mobilizing support for the Eco.

Why ECOWAS Needs the Eco

Although some analysts have expressed scepticism towards the Eco, having a common currency in West Africa is not only a smart idea but also a huge step in the right direction towards regional development and stronger intra-African trade. Most West African countries are small and share borders with two or more countries, which makes having different currencies simply irrational given the huge exchange rate costs incurred by their citizens. Moreover, having a single currency would alleviate externally-induced monetary problems such as exchange rate crisis that face most West African countries, thereby promoting macroeconomic stability. This is because a single currency would have low vulnerability to volatilities of commodity prices (such as oil) or sudden capital outflows due to changes in monetary policies of advanced economies, which have had destabilising effects on domestic currencies of Nigeria and Ghana in the last few years.

According to analysis by African Development Bank economists, only a shared currency can offer West African countries the ability to form a collective resilience to monetary disruptions and would better support growth and job creation objectives in member countries than individual currencies. Similarly, a currency union would give the sub-region greater economic clout in global trade, potentially attracting better investment terms. It has also been pointed out that establishing a regional central bank in West Africa would help insulate monetary policy from insidious political influence and could also help tackle corruption by national monetary authorities.

To successfully implement the Eco, at least three crucial factors need to be accomplished.

First, high-level political commitment is crucial. The fact that the launch date has been postponed four times indicates tepid political will from West African leaders. Thus, there is a need to ensure strong political will that would drive tangible reforms and policy frameworks to accelerate the goal of a common currency within a reasonable schedule. In addition, there is a need for strong coordination between domestic institutions (such as central banks) and regional organizations such as the West African Monetary Institute in order to share knowledge, harmonize policies and build capacity towards a currency union.

Second, there is a need to broaden the focus of West African economies beyond simply meeting the convergence criteria to include regional industrial policy. This is necessary in order to boost industrial production that would form the basis of intra-regional trade and reduce dependence on commodity windfalls causing idiosyncratic shocks to their economies. Realizing this objective, however, would require strong collaboration not only in designing industrial strategies in the sub-region but also in implementing structural reforms that create enabling environments such as providing cross-country infrastructure, overhauling institutions, removing non-tariff barriers and providing sound policy frameworks.

Third, the monetary union needs to be complemented with a strong political union, one that desirably situates pan-Africanism at the core of the agenda. As such, the union should not be politically dominated by bigger economies, especially Nigeria; rather all countries should have an equal voice and actively collaborate towards developing the bloc. More so, it should provide for a robust system of fiscal insurance, whereby underperforming countries are supported with resources from better-performing ones. The outcome would be a stronger bloc backed by popular support.

More broadly, introducing the Eco within the stipulated launch date would be a remarkable achievement for West African economies. As much as there are challenges to cast doubts on the feasibility of a single currency in the sub-region, recent efforts at greater economic integration in Africa provide an unapparelled source of hope for its success. The Eco might well turn out to be a huge success and an inspiration towards a single currency in other sub-regions and, ultimately, for the continent at large⎈