Monkeypox Is Now a Global Health Threat What Exactly Is Happening?

Monkeypox is the seventh public health emergency the WHO has named since 2007.

On July 23, the World Health Organization (WHO) declared the escalating Monkeypox outbreak as a Public Health Emergency of International Concern (PHEIC).

Prior to this declaration, a panel of WHO health advisers struggled to reach an agreement on whether the virus was spreading at an alarming rate and if it met the criteria for infections requiring international concern. The WHO’s director-general, Dr Tedros Adhanom Ghebreyesus, overruled this panel of health advisers on Saturday and used a designation the world’s leading health agency currently uses to describe polio and the COVID-19 pandemic. 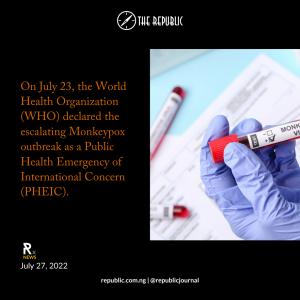 Monkeypox is the seventh public health emergency the WHO has named since 2007. The recent Monkeypox outbreak is also the first time the director-general has bucked his advisers by declaring it so. Of the 15 members on the panel, nine members of the panel were against the declaration, while only six were in favour. Ghebreyesus told reporters, ‘We have an outbreak that has spread rapidly around the world, through new modes of transmission, about which we know far too little, and that meets the criteria’ for a public health emergency.’

Scientists first discovered the Monkeypox virus in captive monkeys used for research in Denmark in 1958. Twelve years later, in 1970, the first human Monkeypox infection was recorded in Zaire (present-day Democratic Republic of the Congo). Human-to-human transmission of Monkeypox was previously thought to be rare, with the virus assumed to be solely transmitted from animals to humans. However, recent outbreaks have disproven this theory. 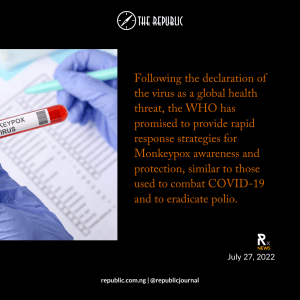 Monkeypox belongs to the same virus family as smallpox, but it is a milder form of the disease. Smallpox, which WHO declared eradicated in 1980, had been combated for decades by the WHO and other national health agencies. Public health experts believe the successful fight against smallpox, as well as the tools developed to combat it, will provide health officials with crucial information for combating monkeypox. 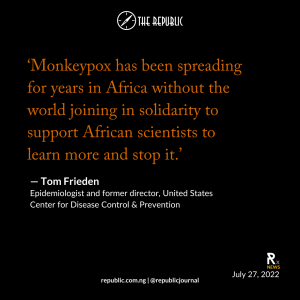 According to epidemiologist, Tom Frieden, ‘monkeypox has been spreading for years in Africa without the world joining in solidarity to support African scientists to learn more and stop it.’ Frieden believes this was a preventable outbreak and now, with the increasing number of cases, ‘the world must respond.’ 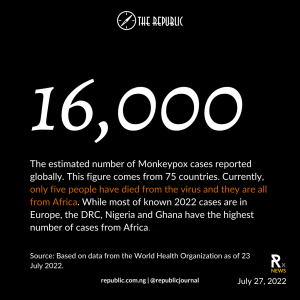 Currently, 75 countries have reported at least 16,000 cases worldwide with the only five deaths recorded this year being in Africa. While most of the known 2022 cases are in Europe, the DRC, Nigeria, and Ghana have the highest number of cases from Africa. According to the WHO, nearly all the infections outside of Africa have occurred among men who have sex with men, implying that there is ‘no signal of sustained transmission beyond these networks.’

Some members of the LGBT community believe that Monkeypox has received insufficient attention. Many also believe that the media is shaping the conversation about the virus in such a way that it will induce fear and stigma as a ‘gay disease’, as it did in the early days of the HIV epidemic.

Following the declaration of the virus as a global health threat, the WHO has promised to provide rapid response strategies for Monkeypox awareness and protection, similar to those used to combat COVID-19 and to eradicate polio⎈

Here are some Republic articles to read for more context on the Monkeypox outbreak:

‘There’s a Story in Everything’ Aisha Salaudeen’s First Draft