Tobi Amusan ran a time of 12.12 seconds breaking the previous record of 12.20 seconds set by American hurdler, Kendra Harrison, in 2016. 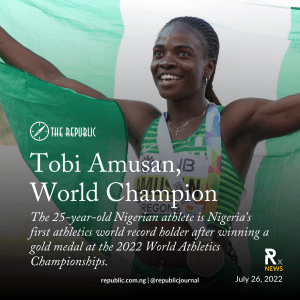 Earlier on Sunday, during the semi-finals, Amusan ran a time of 12.12 seconds breaking the previous record of 12.20 seconds set by American hurdler, Kendra Harrison, in 2016. During the finals, Amusan then improved on that time and won the 100m hurdles race in 12.06 seconds, breaking her previous world record of 12.12 seconds. Unfortunately, due to an illegal wind speed of +2.5metres per second—instead of the legal speed of +2.0metres per second—her 12.06 seconds record time was ruled ineligible. 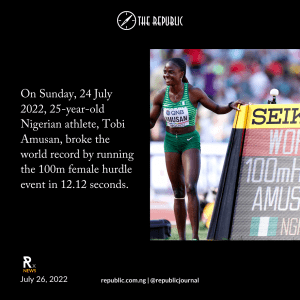 With her world record set at 12.12 seconds, Amusan said she had not planned to get it. ‘The goal was to come out and to win this gold. Honestly, I believe in my abilities but I was not expecting a world record at these championships. You know, the goal is always just to execute well and get the win. So the world record is a bonus.’ 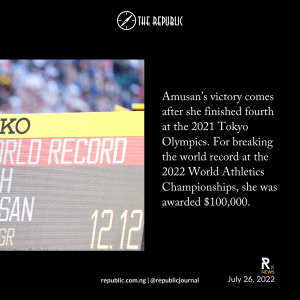 ‘I knew I had it in me but I could not believe it when I saw it on the screen after the semis. Before the final, I just tried to stay calm and to do my best. I took a deep breath knowing that I have some goal to accomplish, and it worked pretty good. I knew it was very fast but not this fast,’ Amusan said. 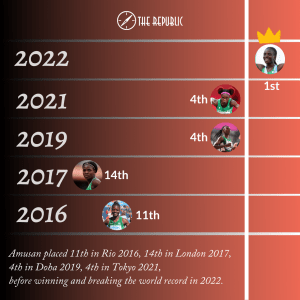 Despite not winning a medal, Nigeria’s 4 x 100 meters women’s relay team—Joy Chinenye Udo-Gabriel, Favour Ofili, Rosemary Chukwuma and Nzubechi Grace Nwokocha—also set an African record in the final of the World Athletics Championship finishing fourth with a running time of 42.22 seconds. They broke a record set at the 1992 Olympics game 30 years ago by Christy Opara-Thompson, Faith Idehen, Beatrice Utondu and Mary Onyali. 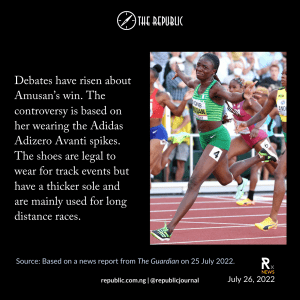 Amusan’s victory comes after she finished fourth at the 2021 Tokyo Olympics. For breaking the world record at the World Athletics Championships, she was awarded $100,000. She won against Britany Anderson (Jamaica) and Jasmine Camacho-Quinn (Puerto Rico) who came second and third respectively. Debates have risen about Amusan’s win—whose previous personal record was 12.40 seconds. The focus of the controversy is on the fact that she was wearing the Adidas Adizero Avanti spikes, which are legal to wear for track events but have a thicker sole and are mainly used for 5,000m and 10,000m races. 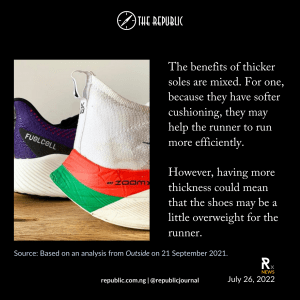 Last year, shoe technology started to gain worldwide attention after Ethiopian athlete, Derara Hurisa, was disqualified from the Vienna marathon after wearing the Adidas Adizero Prime X thicker than what the World Athletics shoe regulations allow—40mm. The benefits of thicker soles are mixed. For one, because they have softer cushioning, they may help the runner to run more efficiently, however, having more thickness could mean that the shoes may be a little overweight for the runner. 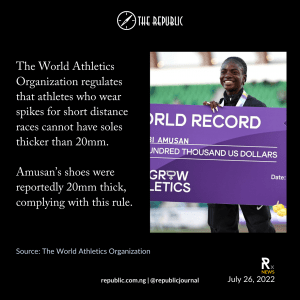 The World Athletics Organization regulates that athletes who wear spikes for short distance races cannot have thicker soles that are more than 20mm, which is the same as the shoes Amusan was wearing on Sunday. Amusan has debunked claims that the spikes benefited her win. ‘My abilities are not centred around spikes.’ She told The Guardian: ‘I had plantar fasciitis at the beginning of the season so that set me back a bit for a while. I spoke to Adidas and I requested spikes with a softer sole. They recommended a lot of stuff and I felt comfortable in that [the Avanti], so I was using that basically the entire time.’ 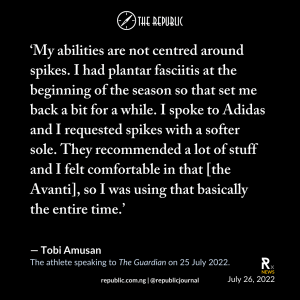 Besides breaking a world record in Oregun, Amusan became the first Nigerian to win a Diamond League trophy in September 2021. Amusan’s world record is the latest contribution to the history of excellence of Nigerian women in sports. Nigerian women such as Chioma Ajunwa, Mary Onyali, and Blessing Okagbare are notable female athletes who have excelled in sports. In 1996, Ajunwa became the first Black African woman to win an Olympic gold medal in a field event and the first Nigerian to win gold at the Summer Olympics in Atlanta. Mary Onyali became an Olympic bronze medallist in 1992 for the 4 x 100m relay and Blessing Okagbare won a silver medal in the 2008 Olympics in the women’s long jump. 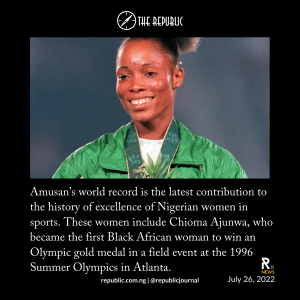 There is a lack of sports infrastructure and funding for women in Nigeria. Compared to African countries like Kenya with a $124 million sports budget, in Nigeria, less than $6 million (N2.7 billion) is allocated to sports for both male and female, according to sports minister, Sunday Dare. In 2016, for the Rio Olympics, Nigeria failed to pay for athletes’ flight tickets to the Olympics until social media outrage ensued. Also, the Nigerian women’s basketball team, D’Tigress, who are the current African champions, were recently banned by the Nigerian government from taking part in international basketball competitions for two years. The decision, according to Dare, was based on the need to revamp the Nigeria Basketball Federation. 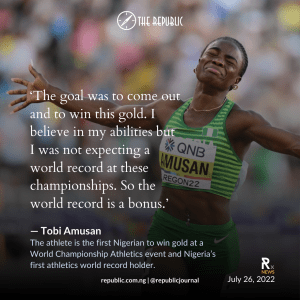 Nigeria’s poor investment in women’s sports has seen the likes of Glory Alozie and Oluwakemi Adekoya leave the country to represent other countries in major competitions. In 2002, Glory Alozie, a Nigerian-born athlete obtained Spanish citizenship and ran for Spain in the 2002 European championship, winning a gold medal. Alozie left Nigeria because of the negligence of the Nigerian government to improve its sports industry. Oluwakemi Adekoya, a Nigerian-born athlete who specializes in 400m, also obtained Bahrain citizenship and represented the country at the 2016 Olympics in Rio.

Despite this, Nigerian women still continue to achieve huge feats in sports. In football, for example, the Nigerian women’s national football team, the Super Falcons, is Africa’s most successful international women’s football team with eleven Women Cup of Nations titles. They are also the only women’s national team from the Confederation of African Football to have reached the quarterfinals in both the FIFA Women’s World Cup(1999) and Football at the Summer Olympics (2004)⎈