The Alaafin of Oyo, Oba Lamidi Adeyemi III, Has ‘Joined His Ancestors’ Aged 83

On 22 April, the Alaafin of Oyo, Oba Lamidi Adeyemi III, died at the Afe Babalola University, Teaching Hospital in Ado-Ekiti, Ekiti State. The monarch had been sick and was expected to be flown abroad before he died. The Alaafin, fondly called ‘Iku Baba Yeye’, was 83 years old and the longest-reigning Alaafin ever, having ruled for more than 51 years.

Alaafin, or ‘The Owner of the Palace’ in Yoruba, is the title of the emperor of the medieval Oyo Empire and present-day Oyo town of Oyo State, Nigeria. Oba Lamidi Adeyemi III who was the 45th Alaafin, was born on 15 October 1938 into the Alowolodu Royal House of Oyo to Oba Adeniran Adeyemi II. His grandfather was Alaafin Alowolodu Adeyemi I, who ruled during the Kiriji War (1877-1893), and was the last independent ruler of the Oyo Empire before the British colonized the empire. Lamidi’s father, Adeyemi II, was dethroned and exiled in July 1954 by the Action Group (AG)-led government of the Western Region, as a result of the death of the deputy leader of the AG, Chief Bode Thomas, and also for sympathizing with Nnamdi Azikiwe’s rival National Council of Nigeria and the Cameroons party.

Adeyemi III grew up in Lagos and Egbaland. He attended Obalende Modern School in the 1940s, where he took a liking to boxing at a young age. In the 1950s, he studied at St. Gregory’s College Obalende and was to travel abroad to study Law but was prohibited due to his father’s exile. He later became an insurance executive with the Royal Exchange Assurance, where he worked until he ascended the throne as the Alaafin of Oyo in 1971, shortly after the Nigerian Civil War. 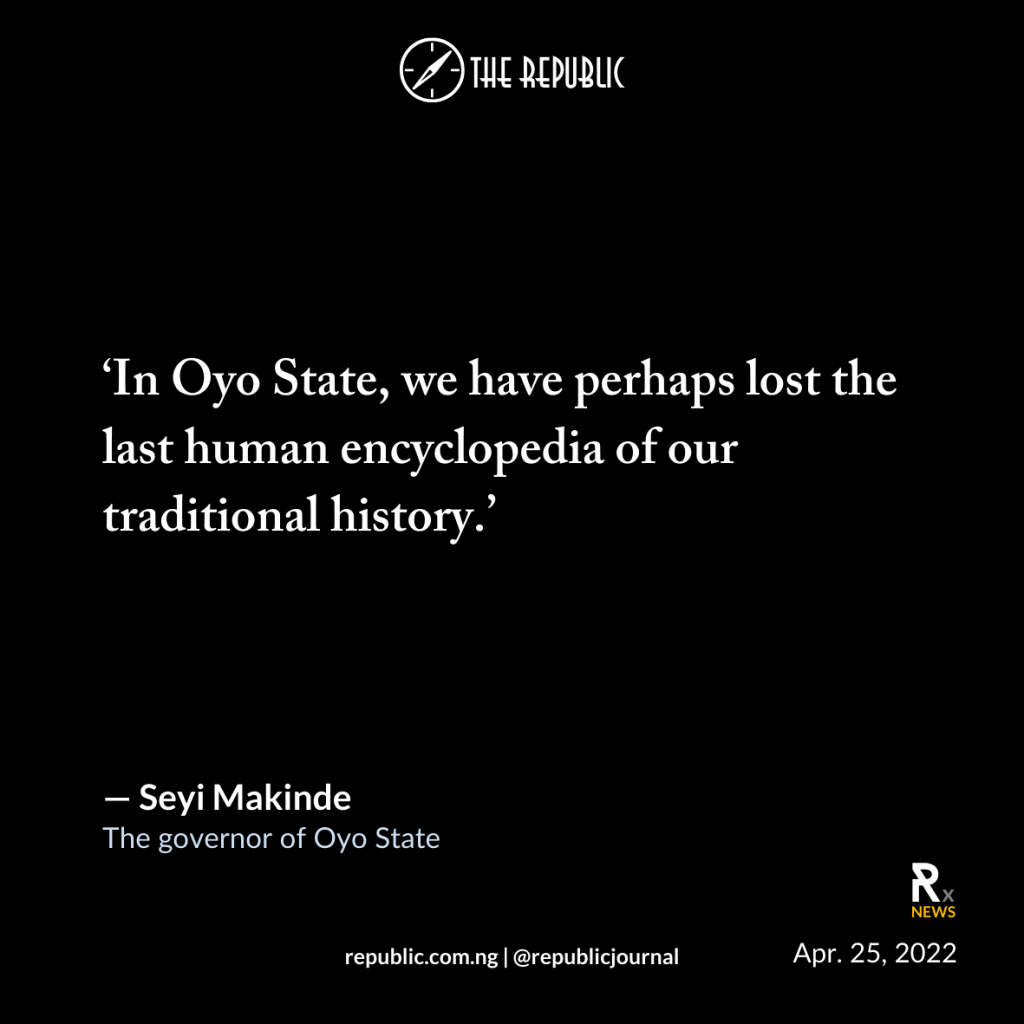 Reacting to the death of the Alaafin, the governor of Oyo State, Seyi Makinde, said: ‘Kabiyesi’s departure is a huge loss not only to Oyo State, to which he committed 52 years of his life as the Alaafin of Oyo Kingdom, but also to Nigeria and the entire Yoruba race… In Oyo State, we have perhaps lost the last human encyclopedia of our traditional history.’

The Alaafin’s death comes just some months after the death of two other traditional rulers in Oyo State—the Olubadan of Ibadan, Oba Saliu Adetunji, who died on 02 January 2022 and the Soun of Ogbomoso, Oba Jimoh Oyewumi, who died on 12 December 2021. The Alaafin was buried on 23 April 2022 in Bara, an Oyo-based vault reserved for Alaafins⎈