President Muhammadu Buhari receives a briefing from the governor of the Central Bank of Nigeria, Godwin Emefiele, in Abuja. 14 May 2017. BAYO OMOBORIOWO / NIGERIAN PRESIDENCY.

Emefiele the Politician? Should the CBN Governor Be Running for President?

The CBN Act mandates that the central bank be a fully autonomous body with the objective of promoting stability and continuity in economic management.

Editor’s note: Our latest issue which explores APC and the Dilemmas of a Ruling Party is now available. Order here

Yesterday, the Nigerian Federal High Court in Abuja refused to grant Godwin Emefiele’s request to remain in office 30 days before the 2023 elections. Emefiele is the governor of the Central Bank of Nigeria, a position he has held since 2014. On 06 May, a spokesperson for Nigeria’s ruling party, the All Progressive’s Congress said that the governor had procured a presidential nomination form—pegged at N100 million Naira—from the party.

Emefiele had filed a lawsuit on 05 May, to prevent the Independent National Electoral Commission (INEC), and the attorney general of Nigeria, Abubakar Malami, from pressuring him to resign from his position in order to pursue his presidential ambitions. Yesterday, high court justice, Ahmed Ramat Mohammed, denied the request and ordered INEC and the attorney general to appear in court on May 12 to explain why the governor should not be allowed to remain in office.

Since Emefiele’s procurement of the nomination form, which was reportedly bought by a group of farmers, there have been calls for his resignation. Many have argued that Emefiele should not mix partisan politics with his job as the CBN governor. Rotimi Akeredolu, the governor of Ondo State, urged President Muhammadu Buhari to sack Emefiele if he refused to resign, saying: ‘This is a joke taken too far… It is, however, difficult to imagine that a person who occupies the exalted and sensitive office of the governor of the Central Bank of Nigeria will be this brazen in actualising his ambition.’

Emefiele had initially dismissed reports of his intention to run for the presidency when presidential campaign posters featuring him were reported earlier this year. Last week, he did not hesitate to express his interest in the presidential contest while thanking his supporters, saying: ‘Should I answer their calls and decide to seek presidential nomination, I will use my own hard-earned savings from over 35 years of banking leadership to buy my own nomination forms.’ 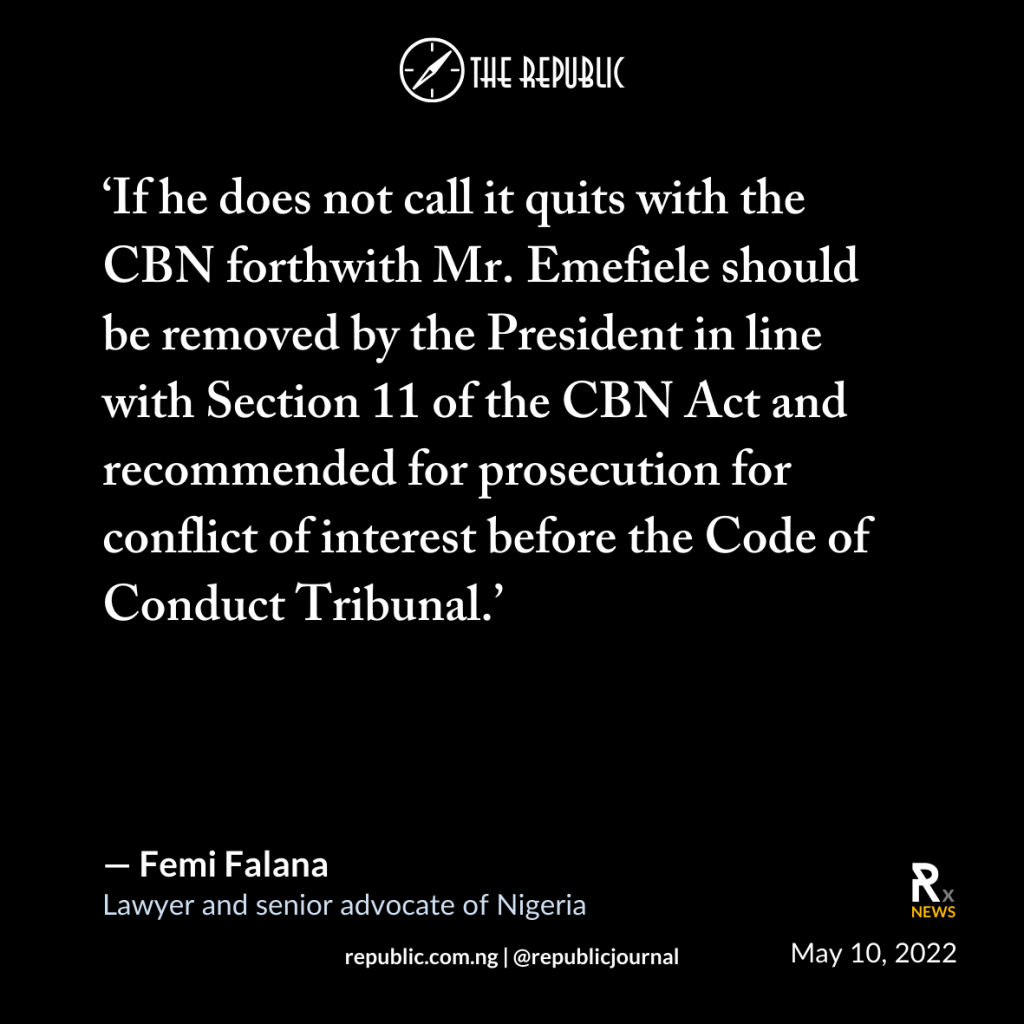 A statement by a senior advocate of Nigeria, Femi Falana, explained that under the CBN Act, Emefiele has the constitutional right to participate in politics and contest elections, however, he is supposed to resign first. As CBN governor, ‘If he does not call it quits with the CBN forthwith Mr. Emefiele should be removed by the President in line with Section 11 of the CBN Act and recommended for prosecution for conflict of interest before the Code of Conduct Tribunal,’ Falana said.

According to the CBN Act, the powers conferred on the governor and the board of the CBN are extensive. They include the power to ensure monetary and price stability; issue legal tender currency in Nigeria; grant and revoke licences of banks; supervise banks; provide loan to governments, set interest rates; promote a sound financial system in Nigeria; and act as bankers and provide economic and financial advice to the federal government.

Hence, the CBN Act mandates that the central bank be a fully autonomous body with the objective of promoting stability and continuity in economic management. According to Falana, ‘the performance of these statutory functions which shall be in the national interest and cannot be left in the hands of a politically exposed person. Therefore, the involvement of the governor in partisan politics will compromise the autonomy of the CBN’⎈

READ
APC Will Charge Presidential Candidates 100 Million To Run for Office
READ
Who’s Running for Nigeria’s Presidency in 2023?
READ
A Heartbeat or An Election Away
READ
The Dilemma of a Ruling Party