Many Nigerians have reported that the latest fuel scarcity has seen a 100 per cent increase in travel costs.

On Monday, 20 June 2022, many filling stations in Lagos and Abuja shut down operations claiming that they could not keep selling Premium Motor Spirit, otherwise known as petrol, at N165 per litre. The Independent Petroleum Marketers Association of Nigeria or ‘IPMAN’, which is a leading marketing organization for many filling stations in Nigeria explained it was no longer sustainable to sell petrol at this price for reasons including:

High diesel costs. Due to weak electricity in Nigeria, many filling stations rely on around 50 litres of diesel daily, to power generators. According to IPMAN’s national operations controller for South-West, Mike Osatuyi, when petrol was agreed to be sold for N165 per litre, the price of diesel was N250 per litre. Presently, the president of the Petroleum and Natural Gas Senior Staff Association of Nigeria (PENGASSAN), Festus Osifo has explained that the price of diesel has increased to N800-N820 per litre, leading to a rise in operating costs for filling stations. 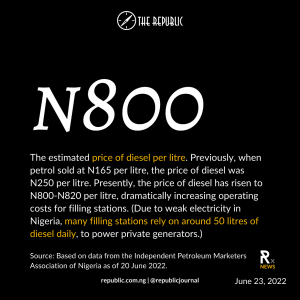 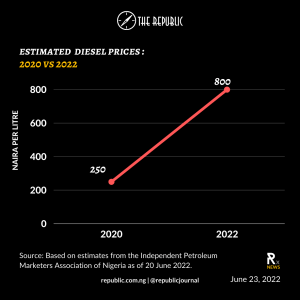 NNPC’s monopoly. The Nigerian National Petroleum Corporation or ‘NNPC’ is the only importer of petrol into Nigeria. NNPC regulates how much petrol is imported and how much petrol is distributed. Until two weeks ago, according to NNPC’s loading update, NNPC was supplying 103 million litres of petrol per day. It later reduced its supply to 60 million litres when the organization discovered that Nigeria only uses about 60 million litres per day and that fuel marketers were selling the surplus illegally to neighbouring countries.

Fuel marketers have criticized the supply decrease, arguing that it is a main driver of the fuel scarcity. Moreover, despite NNPC being the sole government body that imports 60 million litres of fuel daily, several of the institution’s depots are not functional. As such, NNPC still relies on private depots to facilitate easier and faster distribution of its petrol. According to the Lagos zonal chairman of IPMAN, Akin Akinrinade, these private depots sell at an increased rate of N162-N165 per litre—N14-N17 more than NNPC’s designated N148 per litre. Such factors have made it difficult for petrol stations to keep their prices low.

The war in Ukraine. Russia is the world’s largest exporter of petroleum products including petrol, diesel, etc. Following the sanctions placed on Russia after its invasion of Ukraine in February, there has been a global fuel crisis. According to TheGuardian NG, because of the war, stakeholders fear that the fuel crisis may worsen even further. Should the crisis worsen NNPC may not be able to meet targets within its Direct Sale and Direct Purchase scheme—which allows Nigeria to swap crude oil for refined products. 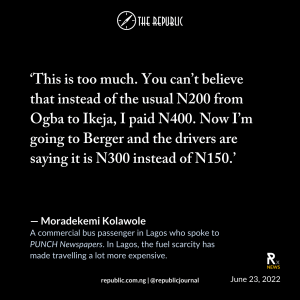 Many Nigerians have reported that the latest fuel scarcity has seen a 100 per cent increase in travel costs. Moradekemi Kolawole, a commercial bus passenger in Lagos, said to PUNCH: ‘This is too much. You can’t believe that instead of the usual N200 from Ogba to Ikeja, I paid N400. Now I’m going to Berger and the drivers are saying it is N300 instead of N150.’

To resolve the fuel scarcity, Akinrinade has asked the federal government to ensure petrol is sold at N148.17k per litre as the ex-depot rate. He explained: ‘if the government through PPMC will supply us directly as marketers and we are made to pay the amount on the government’s template, which is N148.17k, there is no way we won’t sell at N165, but the current price of N162 which private depots are selling is not sustainable. We cannot sell at N165 with that price’⎈