Why Facebook Has Been Accused of Poor Working Conditions in Kenya

In 2020, Facebook paid out $52 million to fund mental health treatment for some of its American content moderators following a lawsuit centred on mental ill health stemming from their work.

According to a TIME investigation, Facebook content moderators in Kenya have revealed how their workplace culture is characterized by low pay, mental trauma, intimidation and the suppression of the right to unionize. These content moderators are employed by Sama, an outsourcing company that contracts labour for some of the largest companies in the world, including Google, Microsoft, Facebook and Walmart.

Some of the current and former Sama employees who speak at least eleven different African languages detailed how working as outsourced Facebook content moderators entailed watching videos of rape, murders, child sexual abuse, and suicides. They are in charge of inspecting and eliminating unlawful or prohibited content from Facebook before it is viewed by an average user. 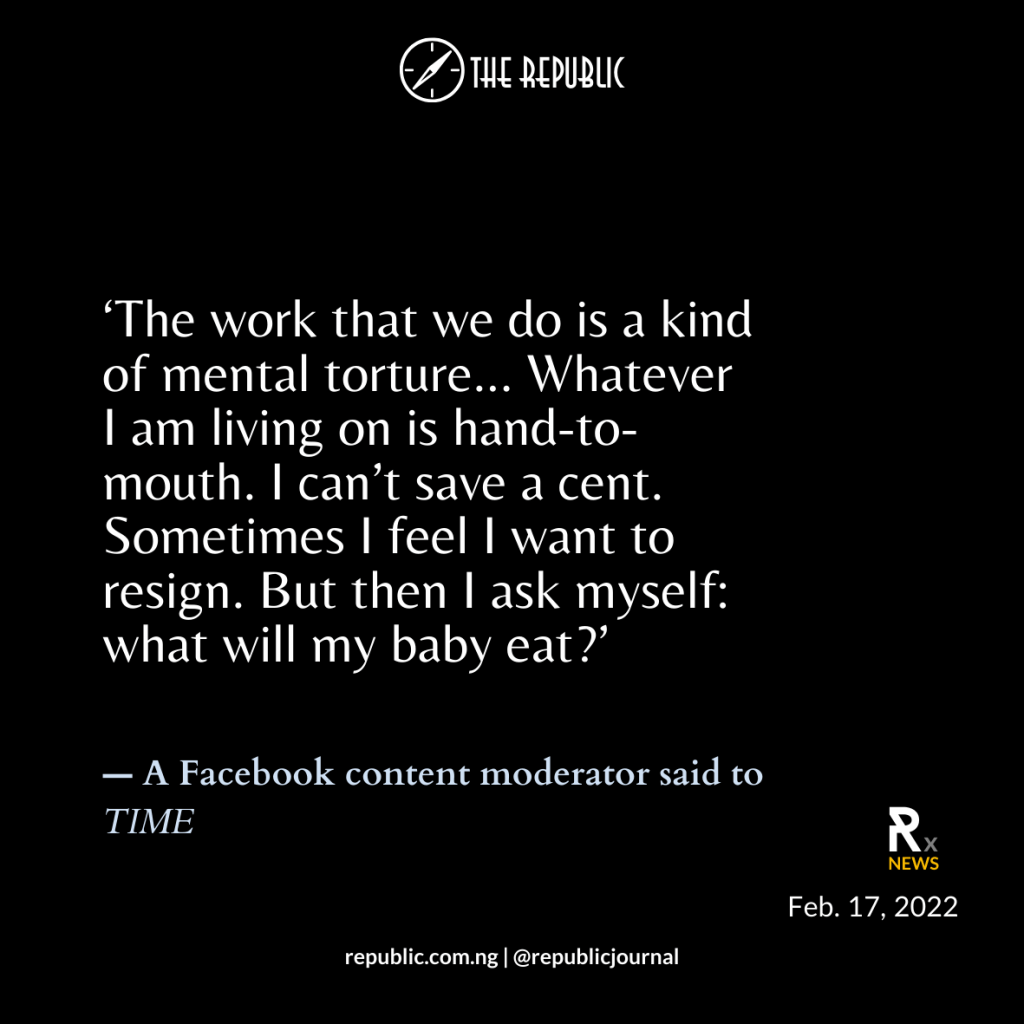 Despite their importance to Facebook, these content moderators are among the lowest-paid employees, with some making as little as $1.50 per hour and receiving inadequate mental health treatment. ‘The work that we do is a kind of mental torture,’ a current Facebook content moderator told TIME. ‘Whatever I am living on is hand-to-mouth. I can’t save a cent. Sometimes I feel I want to resign. But then I ask myself: what will my baby eat?’

In 2019, some of the content moderators, led by 27-year-old South African recent graduate, Daniel Motaung, attempted to form a union and to go on a seven-day strike demanding better pay and working conditions. Instead of negotiating, Sama fired Motaung and told the other employees that they were expendable and said they should either resign or get back to work. The workers stood down before the seven days were up, and there was no pay increase.

‘At Sama, it feels like speaking the truth or standing up for your rights is a crime,’ another employee told TIME. ‘They made sure by firing some people that this will not happen again. I feel like it’s modern slavery, like neo-colonialism.’

Sama has said that its content moderators are paid triple the Kenyan minimum wage but foreign employees who work for the company get paid 67% more than the workers in sub-Saharan Africa. In 2020, Facebook paid out $52 million to fund mental health treatment for some of its American content moderators following a lawsuit centred on mental ill health stemming from their work, including PTSD.

Facebook has said that it spent more than $13 billion on safety measures from 2016 to 2021. In response to the investigation, a spokesperson for Facebook’s parent company, Meta, said: ‘We take our responsibility to the people who review content for Meta seriously and require our partners to provide industry-leading pay, benefits and support. We also encourage content reviewers to raise issues when they become aware of them and regularly conduct independent audits to ensure our partners are meeting the high standards we expect of them’⎈

Here are some Republic articles for more context on tech-related issues in Africa: