Nigeria Has Evacuated More Than 1,300 Citizens From Ukraine Since the Russian Invasion

More than 1,300 Nigerian citizens have now been evacuated from Ukraine since the Russian invasion.

At 6:30 am today, 31 Nigerians—mostly students—fleeing the war crisis in Ukraine arrived at Nnamdi Azikiwe Airport, Abuja from Romania. Also, on Saturday, 12 March 2022, 301 Nigerians in Sumy—a city about 48km from Ukraine’s border with Russia which was one of the first cities to be attacked by Russian forces after President Vladimir Putin ordered the invasion of Ukraine on February 24—returned from Budapest, Hungary. 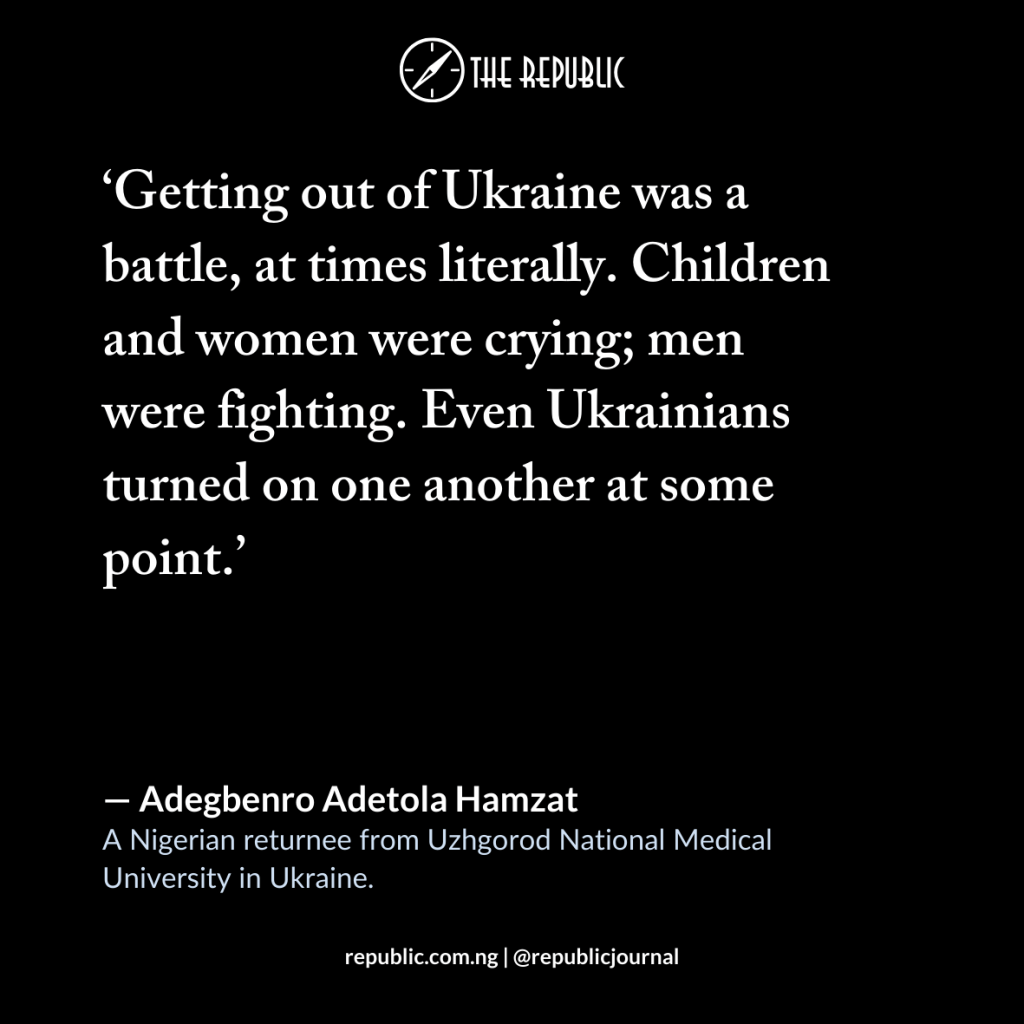 Adegbenro Adetola Hamzat, a Nigerian student from Uzhgorod National Medical University in Ukraine returned to Nigeria on 02 March. Speaking to The Republic about his experience in Ukraine, he said: ‘Getting out of Ukraine was a battle, at times literally. Children and women were crying; men were fighting. Even Ukrainians turned on one another at some point. Yet, my experience paled in comparison to those of my colleagues trapped in other cities unable to get out, sleeping in bunkers and bomb shelters. I thank God some made it out successfully.’

According to Nigeria’s foreign minister, Geoffrey Onyeama, more evacuations are still underway with the latest one anticipated to happen from Kherson, southern Ukraine: ‘In contact with our Ambassador to Ukraine, Shina Alege and our Ambassador to Russia, Abdullahi Shehu, as they strenuously engage the Russian and Indian Governments as well as NGOs in a bid to safely evacuate about 80 Nigerian maritime students in Kherson, Southern Ukraine,’ Onyeama said in a tweet.

On 10 March, the Nigerian government approved $8.5 million for the evacuation of Nigerians in Ukraine, with each citizen to be given $100 on arrival at the airport. ‘The experience was very terrible, many at the time we hear bomb blast, some times gunshots and then we run to the bunker, that is an underground shelter for the bomb blast.’ Ojebe Anthony Agada, a student of medicine at Sumy State University, said to the Vanguard.

Here are some Republic articles to read for context on Russia-Africa relations:

READ
What's Happening in Ukraine?
READ
Ukrainian Authorities Have Been Accused of Preventing Africans From Fleeing Ukraine to Poland
READ
A New Imperialism?