Scotland Has Agreed to Return 17 Benin Bronzes to Nigeria

The Benin Bronzes are a group of more than 3,000 brass plaques and sculptures dating mainly to the 16th and 17th century. In 1897, they were looted by British troops from the Benin Kingdom (in present-day Edo State, Nigeria).

On 14 April, politicians in Glasgow City Council in Scotland voted to return 17 Benin Bronzes to Nigeria. The council also voted to return 25 artefacts to the Lakota people (Native Americans) that were taken during the Wounded Knee Massacre of 1890, in which soldiers of the United States Army massacred more than 300 Lakota people. Scotland will also return seven artefacts to India, making it the largest ever repatriation agreement approved by a UK institution. 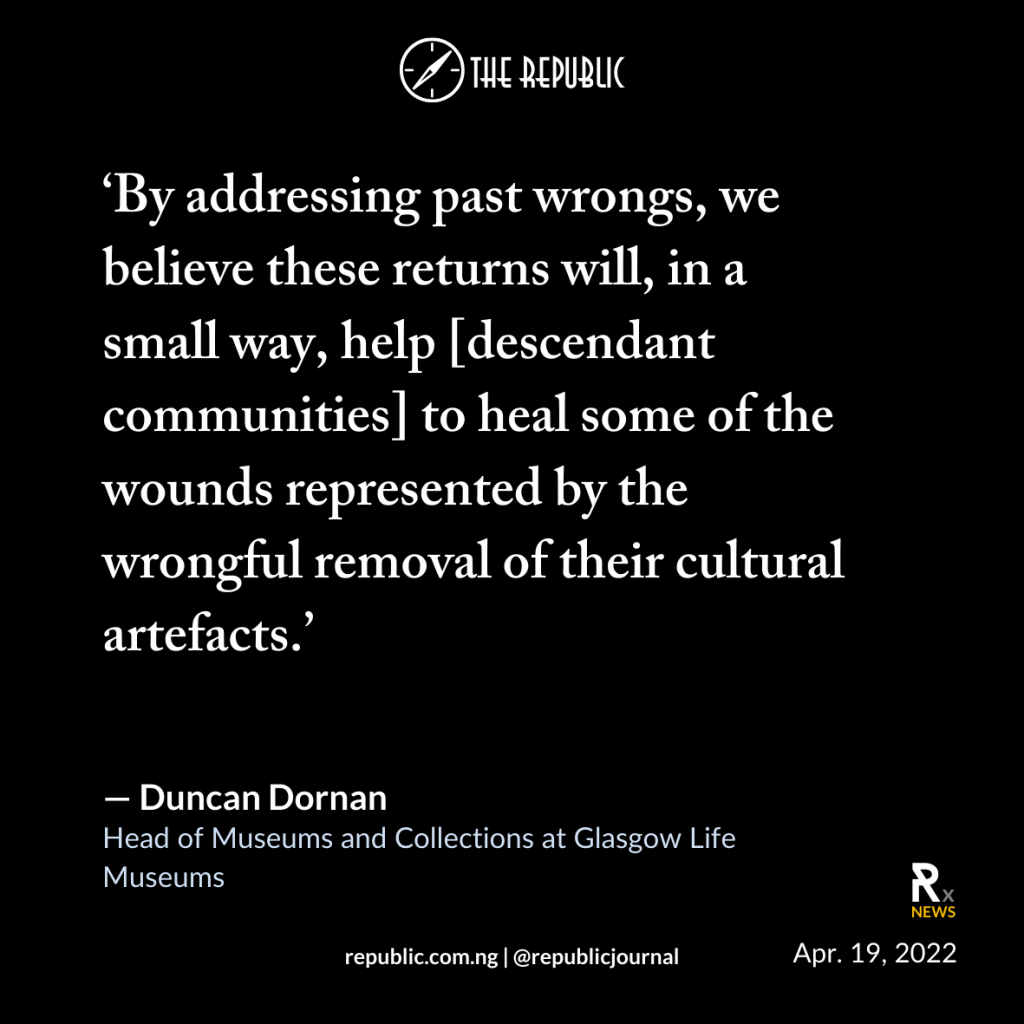 So far, five Benin Bronzes have been returned to Nigeria by Western institutions. On Saturday, 19 February, the Okpa (a cockerel figurine also called ‘Okukor’) and Uhunwun Elao (an Oba head) were returned to the traditional palace of the Oba of Benin, in Edo State, Nigeria, from University of Cambridge and University of Aberdeen. Also, in November 2021, three Benin Bronzes were returned to Nigeria from the Metropolitan Museum of Art, New York. Many Western museums have pledged to return artefacts in their collections that were stolen by British troops during the 1897 Benin Expedition. Earlier this year, the Smithsonian National Museum of African Art agreed to return its Benin Bronzes to Nigeria. Germany has also said it will return thousands of Benin Bronzes in its museum to Nigeria.

Duncan Dornan, the head of Museums and Collections at Glasgow Life Museums—where the artefacts are kept in Scotland—said in a statement:

The return of these objects from Glasgow Life Museums’ collection to their rightful owners represents the largest-ever repatriation of cultural artefacts from a Scottish museum and is a significant moment for our city… By addressing past wrongs, we believe these returns will, in a small way, help these descendant communities to heal some of the wounds represented by the wrongful removal of their cultural artefacts, and lead to the development of positive and constructive relationships between Glasgow and communities around the world.

The Benin Bronzes are a group of more than 3,000 brass plaques and sculptures dating mainly to the 16th and 17th century. In 1897, they were looted by British troops from the Benin Kingdom (in present-day Edo State, Nigeria). Glasgow Life Museums subsequently acquired several bronzes from various sources in Britain as gifts or from auction houses. The 17 Benin Bronzes were requested by the director of National Commission of Museums and Monuments of Nigeria, Abba Isa Tijani, to be returned to Benin, Edo State.

More than 90 per cent of known ancient African artefacts are scattered across Europe in museums such as the Musée du quai Branly–Jacques Chirac in Paris, the Metropolitan Museum of Art in New York and the British Museum in London. In recent years, calls for the return of these artefacts have been gaining momentum with some museums in Germany, America, and France agreeing to repatriate them to Africa. When returned, the Benin Bronzes will be housed in the Edo Museum of West African Art, said to be designed by architect, David Adjaye⎈

Here are some Republic articles to read for more context on the Benin Bronzes: