Yesterday, when the primary election began in the afternoon, there were 23 presidential aspirants contesting, but after pronouncements by each of the aspirants, only 14 of them remained in the race to become APC’s presidential candidate. Seven of them withdrew from the race in support of Tinubu. They include: Nigerian lawyer, entrepreneur, and only female candidate, Uju-Kennedy Ohanenye;  former Ogun State governor, Ibikunle Amosun; Jigawa State governor, Abubakar Badaru; former Minister of Niger Delta Affairs, Godswill Akpabio; former speaker of the House of Representatives, Dimeji Bankole; the senator for Ondo North, Ajayi Boroffice; and governor of Ekiti State, Kayode Fayemi. 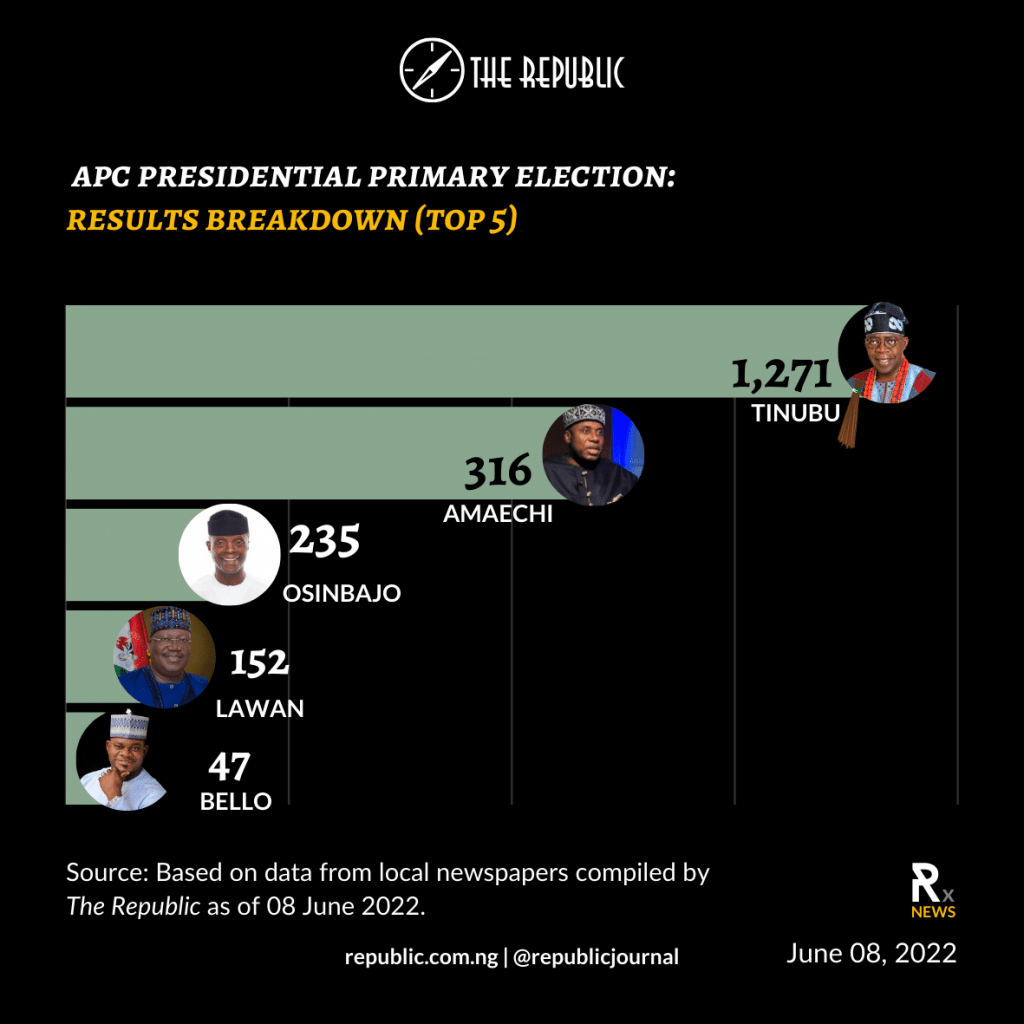 The former senate president, Ken Nnamani, withdrew from the race without declaring support for any of the remaining aspirants. Nnamani cited APC’s alleged lack of ‘sincerity on zoning arrangements and poor management of primary election activities’ as reasons for his decision to withdraw from the race. The youngest male presidential aspirant, Nicholas Felix, stepped down for Vice President Yemi Osinbajo.

Tinubu was the governor of Lagos State from 1999 to 2007 and senator for Lagos West during the Third Republic (1992-1993). He has been the national leader of APC since the party’s formation in 2013. In his 2023 presidential agenda, ‘My Vision For Nigeria’, Tinubu promised to create jobs, boost the economy, provide a sustainable 24 hours per day electricity supply to all Nigerians. 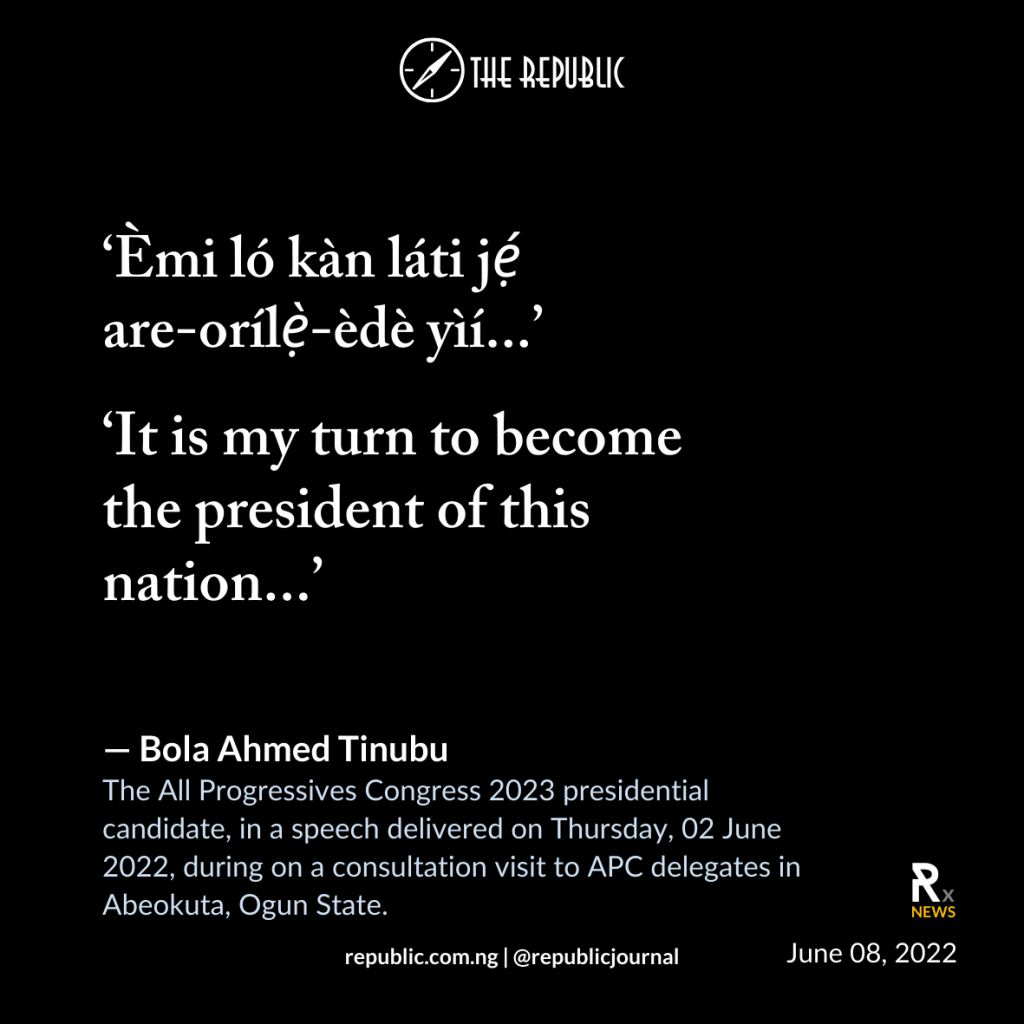 On 02 June 2022, Tinubu had given a press conference in Ogun State, affirming his desire become Nigeria’s president. ‘Èmi ló kàn,’ he declared. Yoruba for ‘it is my turn’. Tinubu also mentioned that he ‘made’ President Muhammadu Buhari the president and nominated Vice President Yemi Osinbajo as Buhari’s running mate in 2015.

A total of 2,203 delegates from the 36 states of Nigeria were accredited to participate in the APC primary election. As APC’s frontrunner, Tinubu will contest against Peter Obi of the Labour Party and Atiku Abubakar of the People’s Democratic Party in the 2023 presidential election.

Tinubu has been a dominant name in Nigeria for over two decades. Tinubu’s career in politics started in 1992 when he joined the Social Democratic Party (SDP). He was elected to the Senate to represent the Lagos West district during Nigeria’s short-lived third republic in 1993. After the June 12 1993 presidential elections were annulled, Tinubu and 48 others including Chief Anthony Enahoro, formed the National Democratic Coalition (NADECO), a pro-democracy movement. One main aim of the movement was to get the current government to acknowledge MKO Abiola as the winner of the presidential elections.

As a result of NADECO’s vocal opposition to the ruling military government, members of NADECO faced heavy opposition. Tinubu eventually fled the country after the 1993 coup d’état that was orchestrated by General Sani Abacha, and only returned to Nigeria in 1998 after Abacha’s death. Tinubu rose to prominence during his tenure as governor of Lagos State from 1999 to 2007. In that time, he implemented programs such as alternative dispute resolution in the justice system, building 10,000 housing units for low income earners, and construction of new roads. 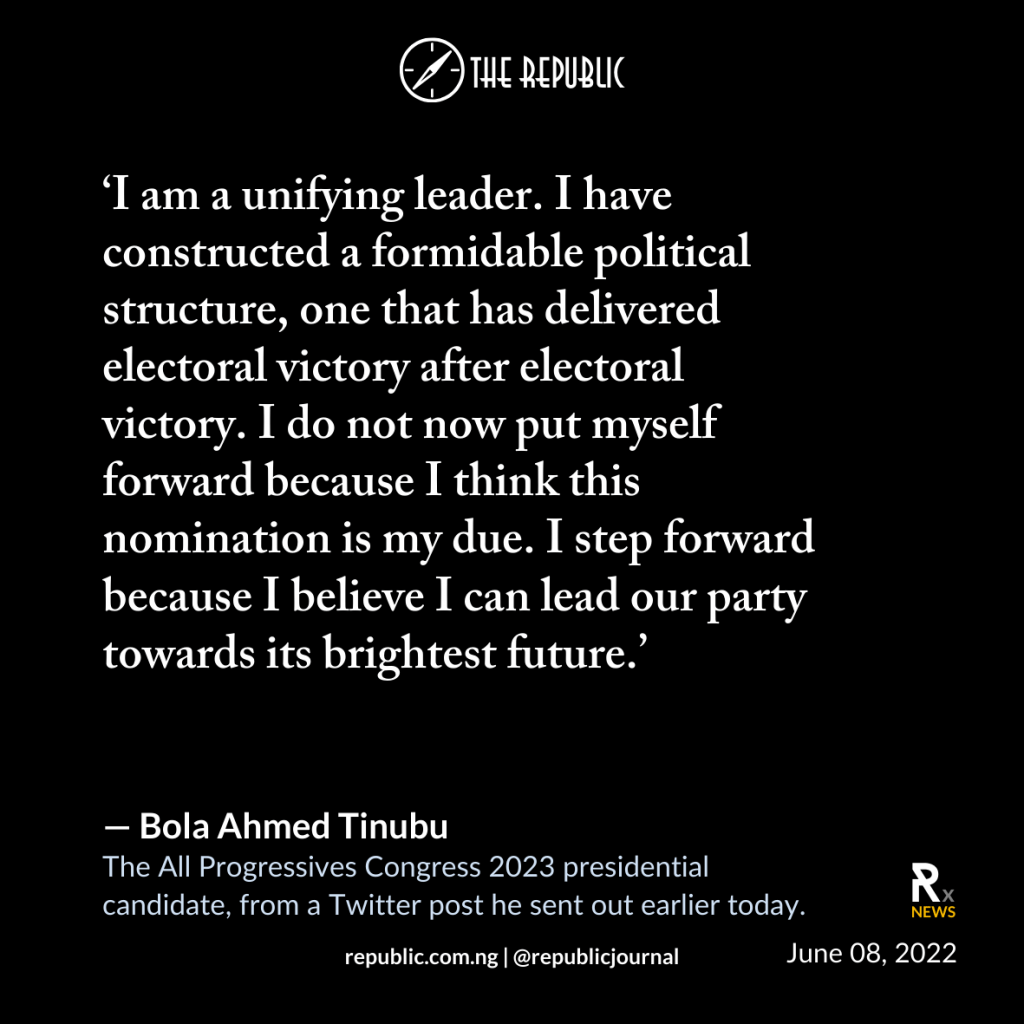 In 2013, six years after leaving office, Tinubu, in collaboration with other party leaders, successfully merged a number of political parties—Action Congress of Nigeria (ACN), Congress for Progressive Change (CPC), the All Nigeria People’s Party (ANPP) and All Progressive Grand Alliance (APGA)—to form the All Progressives Congress (APC), one of Nigeria’s biggest parties, and the current ruling party.

Tinubu’s involvement in Nigeria’s political landscape over the past two decades has made him a hero in some people’s eyes and a villain in others’. On one hand, he has been praised for his accomplishments in Lagos State. On the other hand, Tinubu has been accused of corruption and godfatherism as subsequent Lagos State governors after him are rumoured to have been selected by him. Either way, Tinubu is still very present in Nigerian politics and does not seem to be leaving anytime soon⎈