Burkina Faso has suffered outbreaks of unrest and armed violence since 2014, when longtime President Blaise Compaoré was driven from power. Compaoré took power in 1987 when revolutionary leader, Thomas Sankara, was ousted and killed.

On 24 January 2022, Burkina Faso’s army announced on national television that it had ousted the country’s president, Roch Kaboré, in a coup. The army has also suspended the constitution, dissolved the government and the national assembly, and closed the country’s borders. As of the morning of 24 January, according to Reuters, the whereabouts of Kaboré were unknown but locals reported seeing bullet holes on a car that belonged to the presidency.

Led by Lieutenant Colonel Paul-Henri Sandaogo Damiba, on 24 January, the coup plotters said it has detained several government officials including Kaboré. The location of these officials remain unknown. Damiba mentioned that a reason for the coup was Kaboré’s incapacity to effectively handle the increasing Jihadist terrorist attacks that had plagued Burkina Faso since Kaboré came into power in 2015. Damiba also said that the new military government would work to establish a calendar ‘acceptable to everyone’ for holding new elections. He did not provide further details.

Since 2015, after Kaboré became president, discontent has been growing in Burkina Faso over the government’s failure to contain the worsening levels of terrorism and local insecurity. Anti-government sentiments escalated in November 2021 when 53 people, mainly members of the security forces, were killed by alleged Jihadists. On 22 January 2022, a banned protest against the government’s perceived failure led to dozens of arrests. 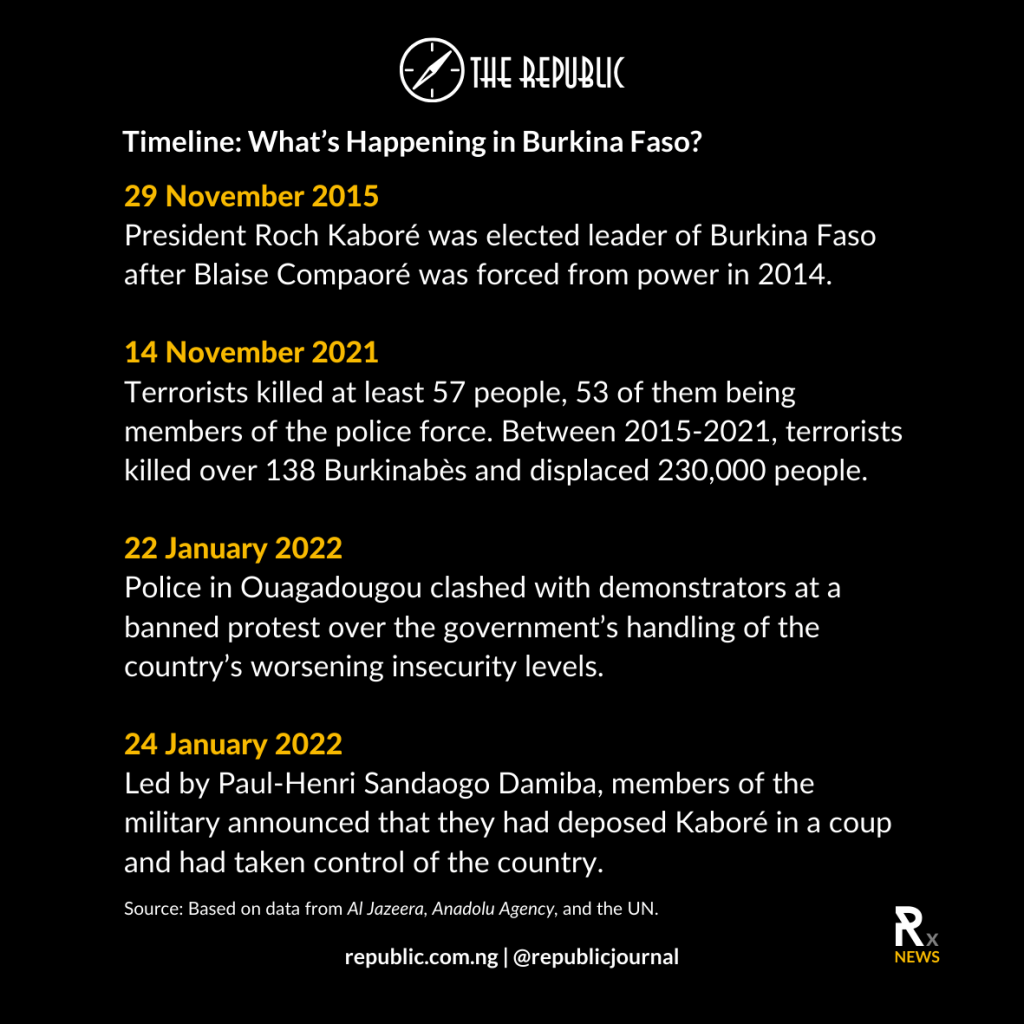 Many Burkinabès believe the coup was expected and have expressed support for the military. Salif Kientga, an Ouagadougou resident who was at a rally this morning in support of the military junta, said: ‘I’m happy to be here this morning to support the junta in power. We wish that terrorism be eradicated in the months or the years to come’.

Burkina Faso has suffered outbreaks of unrest and armed violence since 2014, when longtime President Blaise Compaoré was driven from power. Compaoré took power in 1987 when revolutionary leader, Thomas Sankara, was ousted and killed—although Sankara’s murder trial started last year, the trial was later suspended and has not been relaunched.

Burkina Faso is now the third West African country to undergo a military coup in recent years—since Mali in August 2020 and Guinea in September 2021. The military also took over in Chad in April 2021 after President Idriss Deby died fighting rebels on the battlefield in the country’s north⎈

Here are some Republic articles to read inspired by Burkina Faso:

READ
The Inevitable Revolutionary
READ
What’s Happening in Mali?
READ
Is all Jihad in Africa Local?