Mali’s opposition parties have criticized the military government for postponing elections and has blamed them for the sanctions while many Malians have rallied behind the military junta, with nationalist messages flooding social media.

On 9 January, leaders of the Economic Community of West African States (ECOWAS) imposed sanctions on Mali following a proposal by Mali’s military government—led by Colonel Assimi Goita—to stay in power until 2025 before staging elections. Goita, who first took power in a coup in August 2020 had promised to hold presidential elections, and restore the country to civilian rule by February 2022.

Following the sanctions, the Mali’s military government urged Malians to take to the streets on 14 January to protest against the sanctions and international pressure said to be primarily from France, Mali’s former colonial government. According to Al Jazeera, people poured into Independence Square in Bamako, Mali, holding up signs that read, ‘Down with ECOWAS’ and ‘Down with France’, and singing patriotic songs.

Mali’s opposition parties have criticized the military government for postponing elections and has blamed them for the sanctions while many Malians have rallied behind the military junta, with nationalist messages flooding social media. According to Adama Cisse, a 40-year-old teacher and protester who spoke to Reuters, ‘I am here to say that Mali is first for Malians, it’s not ECOWAS or France who are going to make decisions in our place.’ Abdoulaye Yanoga, a 27-year-old man at the rally who spoke to Al Jazeera also expressed his support for the military saying: ‘Long live Assimi… These sanctions will not succeed here.’

The sanctions which have been backed by France, the United States and the European Union include closing Mali’s borders, imposing a trade embargo, halting financial aid to Mali and freezing the country’s assets at the Central Bank of West African States. According to AFP, the sanctions threaten to damage Mali’s vulnerable economy as it is one of the poorest countries in the world.

In August 2020, Mali’s former president, Ibrahim Boubacar Keïta, who led the West African country from 2013 was ousted in a coup by Goita (Keïta died just yesterday). Under threat of sanctions by ECOWAS following the coup, Goita had promised to hold presidential elections in February 2022. But he staged a de facto second coup in May 2021, forcing out an interim civilian government, disrupting the timetable to restore democracy, and declaring himself interim president.

Goita’s government has argued that rampant insecurity in Mali will prevent the country from organizing safe elections by the end of February. They also said they had developed a ‘response plan’ to the potentially crippling sanctions and remained open to dialogue with regional institutions⎈ 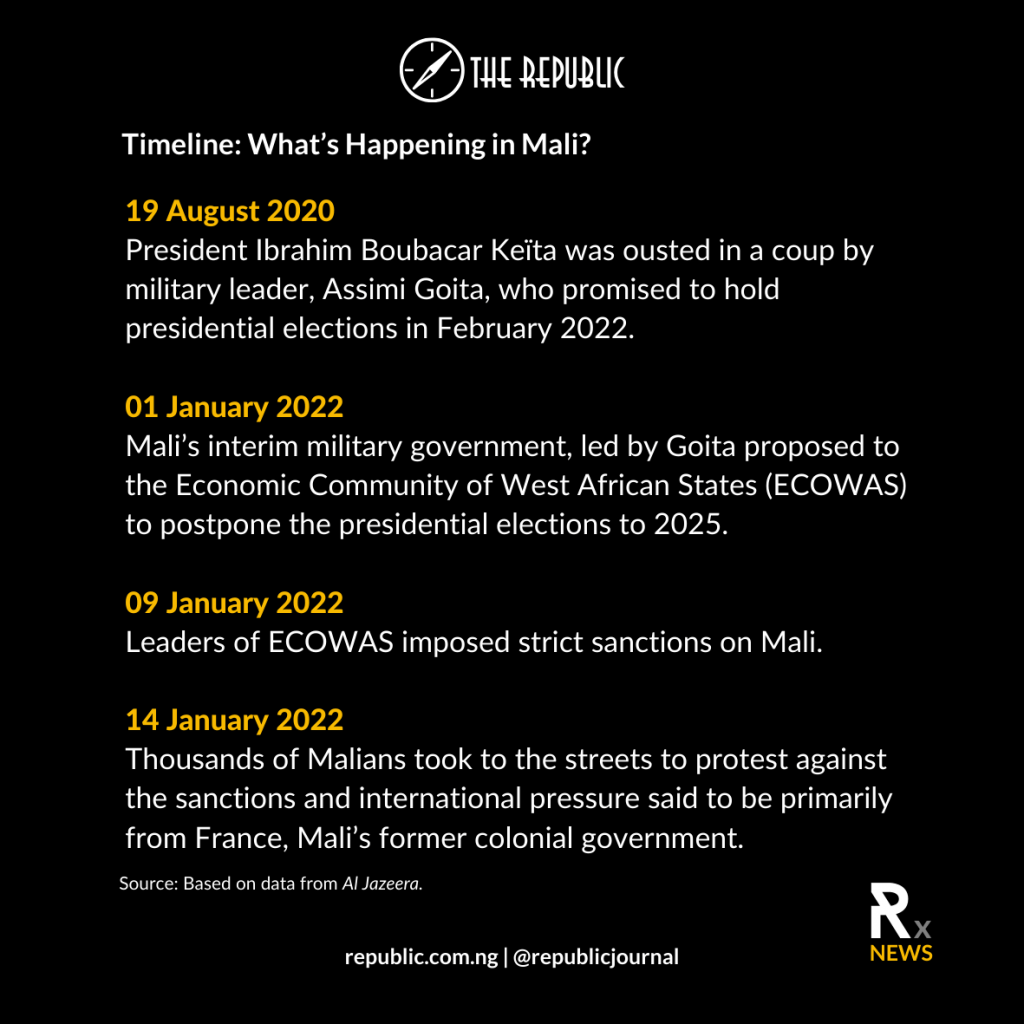 Here are some Republic articles and interviews to read inspired by Mali:

READ
Under the Radar
READ
The 'Hidden Hand' of Europe