Keeping Up With My Sister, KemKem. FUNMI LIJADU

The Artist-Philosopher Keeping Up With My Sister, KemKem

Olukemi Lijadu, or ‘KemKem’ (see her on Instagram and Soundcloud) is a DJ, philosopher and the creator of the 2022 experimental film, Guardian Angel. She’s also my older sister and throughout my life, I have watched her bloom into the incredible, multidisciplinary hybrid creative that she is today.

At night as kids, we would lie in our pyjamas on our massive brown carpet in the living room listening to music. The carpet was big enough for the whole family and it had trimmings on its edges that held geometric patterns and line drawings. We sat, danced, stood, spoke, and dreamed in that living room in our two-story Lagos home, listening to our Dad’s CDs. He had a treasure chest archive—boxes filled with rows and rows of albums from Joni Mitchell to Tracy Chapman to Janet Jackson.

The sounds reverberated through the walls of our house from the free-standing speakers that almost reached the height of my seven-year-old chin. For hours, my siblings and I would sing along to the lyrics, talking, and enjoying time after dinner. Those golden nights of listening to music set the pace for a lifelong love affair with art.

Our parents played music around the house in down-time, when guests were around, in times of celebration and mourning. In this way, music became a sophisticated language, part and parcel of our lives in a consistent way.

Art was around us all the time. In our home, slick monochrome sculptures of animated figures stood in the living room and by the front door. Little trinkets glittered on cabinets and paintings of bustling marketplaces and emotive portraits filled the walls in our dining room.

We grew up with a natural attentiveness to beauty and culture—an appreciation we carried with us into the wider world. Our parents were culture-bearers as well as caregivers. With a dad that collected art and an architect for a mum, a curiosity about design and culture was written into our DNA. My mum would always take special care to help me on my school craft projects. We’d work together on macaroni necklaces mimicking ancient Egyptian treasures or posters and sculptures made out of tissue paper and glue. They would often tell us that we should seek excellence and that ‘whatever you do, make sure you do it well’.

Kemi shows up in the world as a textbook extrovert, unafraid of making herself known in a room and initiating small talk with an inviting presence and smile. Her presence is undeniably bold in a way that I didn’t always understand—she was always the one urging me and my siblings to chat with unfamiliar visitors in our home at times when I didn’t always feel it was my responsibility to entertain them. She has a distinct presence though she is petite in height and build, and her voice often takes shape in a gentle high-pitched tone. 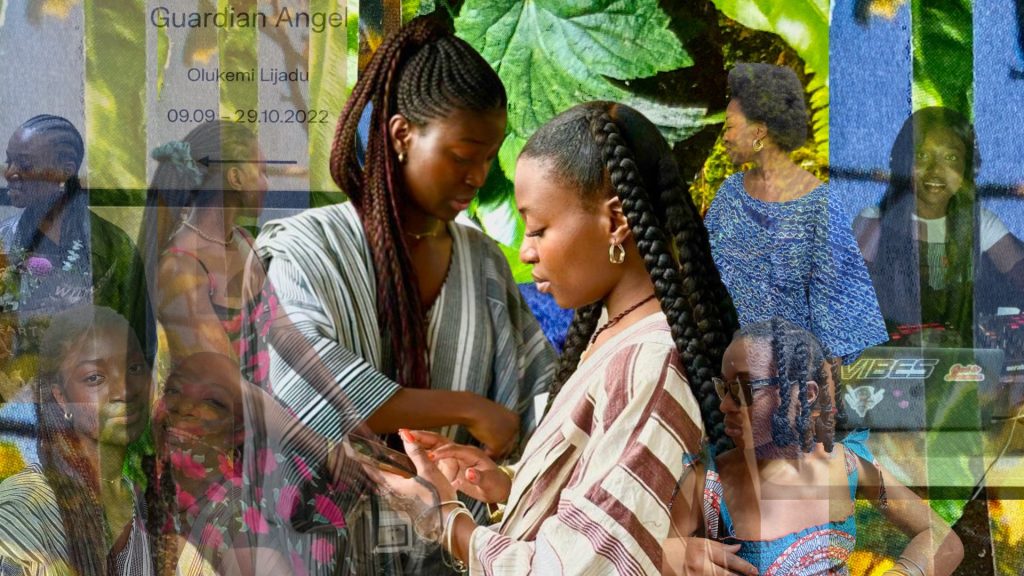 She has always taken the role of big sister seriously, doing her best as the eldest of four to provide a soft landing for each and every one of us. I grew up looking up to her the way that little sisters do, when the world is a crazy cocktail of information and choices that don’t make much sense yet. From shopping in her wardrobe to borrowing clothes, listening to her stories of family life before I was born, she showed me a way to exist in the world.

To this day I still look up to her for her perspective, even though I tower over her in height. I’ve observed her in how she’s navigated both the opportunities and the challenges life has thrown her way over the years—attentive to how all these events have shaped her, and the meanings she attaches to the journey.

Fast-forward many years later, Kemi released Guardian Angel, commissioned by the The Institute of Contemporary Arts (ICA) as part of their 2022 Image Behaviour programme.

Guardian Angel is not merely a film. It’s a multi-screen projection and multi-sensory live performance that explores ideology, history and familial legacies. An avant-garde vision, it reflects my sister’s nuanced perspectives of religion, informed by history and the attitudes of our late grandma. It draws together threads from both her study of African philosophers as well as our Catholic upbringing.

In the film, viewers are confronted with present-day footage of churches in Nigeria, the stained glass and devoted parishioners kneeling in prayer. But the present-day contexts in the film are always underscored with the historical processes that came before. For instance, the jarring reality of forced religious conversion is portrayed via archival footage of Catholic missionaries interacting with indigenous people. The film depicts indigenous folk running to attend the church service at the sound of the bells, eager to receive Holy Communion, as well as the missionaries unashamedly outlining their plans to flatten and replace existing traditions with their own.

My sister is a hybrid and, in many ways, hybridity comes naturally to her, not only because of her multifaceted creativity, but as someone whose identity exists at many intersections of blackness. With its multimedia processes and multidisciplinary subject matter, this film not only reflects my sister’s multidimensional identity, but it also mimics the postcolonial notion of hybridity. As I ponder on my sister’s intellectual approaches, I am reminded of the acclaimed scholar Homi K. Bhabha’s work on postcolonial hybridity which acknowledges the fluid, ongoing processes by which identities and cultures are formed, including an exchange that influences both the colonizers and the colonized, though in different ways.

The process that brought her film to life began long before its debut in March this year at V.O Curations in London. From 2021, she started building her story, gathering inspiration and images, filming across Nigeria and the UK. The use of multiple settings resulted in a fabulous array of images, from time-lapses of flowers in bloom, to portrait shots of herself, the Lagos skyline and much more. The technicality of the film also took on a hybrid approach using both digital cameras, and analog cameras like the Kodak Super8.

I love how her film was able to span a range of human emotions, from nostalgia, to excitement, to longing. ‘I often talk about how my favourite emotion is saudade, bittersweetness, happy sadness,’ she said. ‘Similar to how I approach curating my DJ sets, in Guardian Angel, I try to take the viewer on an emotional rollercoaster as that is more true to life.’

Before venturing to make Guardian Angel, Kemi was a DJ, learning the craft on American soil with her stage name The Kemist. Since then, she has taken her talents worldwide, from Djing in Lagos, to taking up residencies in Botswana and thrilling audiences in London and beyond. These days, you can find her behind the decks at parties and events, headphones on, bouncing in time with her meticulously curated mixes. She is fascinated with what makes people tick, and her DJ career enables her to tap into those stories and emotions. KemKem has DJed across the world from California to London, gathering a range of experiences, audiences and music tastes along the way. ‘My goal when curating a DJ set is to find what connects and then perhaps take the audience on a journey,’ she explained. ‘So if I am playing a set in London, I will try and take them sonically to Lagos, or California and I do that across each country.’

The intellectual world shapes her creative work; she spent years ruminating on the secrets of the cosmos and human experience studying philosophy at Stanford, as both an undergraduate and a Master’s student.

In KemKem’s work, I find a willingness to take risks and put herself forward for new tasks and challenges. As artists, we inspire each other and my sister confessed that my relentless, and slightly obsessive collage practice had an impact on her, too. ‘I was always astonished by your ability to conjure up what felt like magic from such a young age,’ she explained. Collage has a lot in common with filmmaking. Though it can be digital, my practice is often analog, taking scissors to paper and manually cutting and pasting. The images I’m drawn to are dreamlike, surrealist in nature which means that it is a process of constantly combining, excluding and including. The devil is in the detail, a perspective that the filmmaker knows well.

Kemi enjoyed the security and rhythm of the corporate world for almost three years – clocking in, clocking out and the safety of a clearly defined income. But in a way, her roles meant that her creativity had to be shaped in very specific parameters. This tightly defined work sometimes left her thinking of what it would be like to create without limits.

In search of fulfilment, she left her design-related job to freelance, opening up more time for music and film. Kemi told me that after spending some years in 9-5 roles, she felt that she needed some change: ‘I felt like in ten years I was going to look back and remember the work that I had made as an artist more so than my corporate work. To me, art lives on much longer. I really felt that right now, while I’m young—it’s the perfect time to take that risk in my career.’

It has now been more than a year since she made the big switch from a full-time corporate career, to being a full-time creative professional, with a particular focus on music, sound and film.

That move gave her the freedom to manifest in a new dimension and every manifestation has been a delight for me to witness—like the bustling opening night of Guardian Angel at V.O Curations in London. I remember people spilling out of the modest exhibition space, everyone eager to see my sister’s latest creation. Her film was screened in a room draped in translucent off-white fabric. At the front there was a big screen that projected her work, with about four stalls of benches for visitors draped in white in a way that felt to me like a sacred, religious setting. The cocoon-like décor of the space created a one-of-a-kind communal screening for us and as we all watched Kemi’s images come to life, emotions whirled within and among us, holding us together in a poignant intimacy.

Guardian Angel represents the incredible power of film as a self-reflective tool, one that unlocks instincts, hopes and dreams that are usually crushed under the demands of everyday life.

That exhibition and the performances around it make up only one pivotal chapter in what I believe will be an expansive creative story. With guardian angels protecting her path, and a familial legacy of creativity, my sister is bound to inspire audiences, and her loved ones like myself, for many years to come.

My sister KemKem, she’s gifted with an imaginative mind that compels her to never stop learning, to never stop pouring into that well of fresh content churning inside the profound depths of her being. She’s a cultural icon on the move, I’d say… and we’re all just trying to keep up​​​​​⎈