Zamfara has recently been grappling with rising banditry attacks. Over 250 people have been killed this year from attacks in the state. In response to the insecurity, the state government is permitting its residents to arm themselves with guns.

On Sunday, 26 June 2022, the governor of Zamfara State, Bello Matawalle, announced that residents of the state can now apply to own gun licenses to protect themselves from gunmen and kidnappers. In a statement by Zamfara’s commissioner for information, Ibrahim Dosara, the move was in response to the increasing cases of kidnappings, killings and violent attacks within the state.

According to Dosara, ‘Government is ready to facilitate people, especially our farmers, to secure basic weapons for defending themselves. Government has already concluded arrangement to distribute 500 forms to each of the 19 emirates in the state for those willing to obtain guns to defend themselves.’

The government intends to issue its first 500 gun licenses in phases. First, residents are to apply through their local traditional rulers (emirs), where they will be screened for good character and credibility. Their application will then be move on to the state commissioner of police for a second review. The inspector-general of police will carry out the final phase of screening and reviews before gun licenses can be issued. 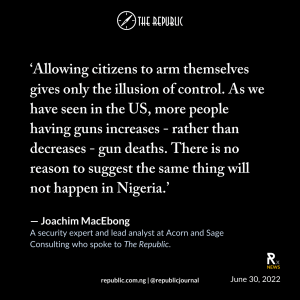 The Zamfara State Government believes that this approach is a ‘legitimate process to make sure that our people are given legitimate weapons to protect themselves’, but Joachim MacEbong, a security expert and Lead Analyst at Acorn and Sage Consulting disagrees. Speaking to The Republic, MacEbong noted that ‘The Zamfara state government appears to have bowed to pressure from certain parts of the state to allow communities defend themselves from attacks by criminals and terrorists. In bowing to that pressure, it has also admitted their own inability to keep the peace. All this to say that arming civilians is not a good measure because it shows that the state has lost its monopoly of violence.’

MacEbong also explained that increasing the availability of arms in circulation, means that some of them are likely to fall into the hands of bandits and terrorists, further worsening the insecurity situation. ‘Allowing citizens to arm themselves gives only the illusion of control. As we have seen in the US, more people having guns increases—rather than decreases—gun deaths. There is no reason to suggest the same thing will not happen in Nigeria,’ MacEbong said.

In 2019, President Muhammadu Buhari cancelled the license of all private weapons across the country. This decision put him at odds with lawmakers who cited the insecurity nationwide as a reason to allow vulnerable citizens to carry arms. Currently, under Nigerian law, the state government does not have the power to issue gun licenses. This can only be done by the president through the house of assembly. So, Matawalle’s decision needs the approval of the federal government.

Zamfara has recently been grappling with rising banditry attacks. Over 250 people have been killed this year from attacks in the state. Last Saturday, bandits attacked the Mada community in the Gusau Local Council. Promising to return, the bandits have caused thousands of residents from Mada to flee their homes⎈