The assassination has struck a nerve among Nigerians and some Italians who feel it was a racially motivated attack.

On Friday, 29 July, on the main street of Civitanova Marche, a beach town on the Adriatic Sea in Italy, a 39-year-old Nigerian, Alika Ogochukwu, was killed while trying to sell trinkets to an Italian man and his girlfriend. Immediately after rejecting his offer, the murder suspect, whose name is Filippo Ferlazzo, knocked down Ogochukwu and began beating him until he died. The violent assault lasted for four minutes, was captured on camera by witnesses, and was well circulated on social media.

Following Ogochukwu’s death, on Saturday, hundreds of Italians and Nigerians demonstrated in Civitanova Marche, where some of them likened the incident to the murder of George Floyd in the United States. Ogochukwu’s wife, Charity Oriachi, has said that she is demanding justice for the death of her husband: ‘I want to look that man in the eye and ask him why he killed my husband. There were so many people around, why didn’t anyone help him? I want justice now,’ Oriachi said. 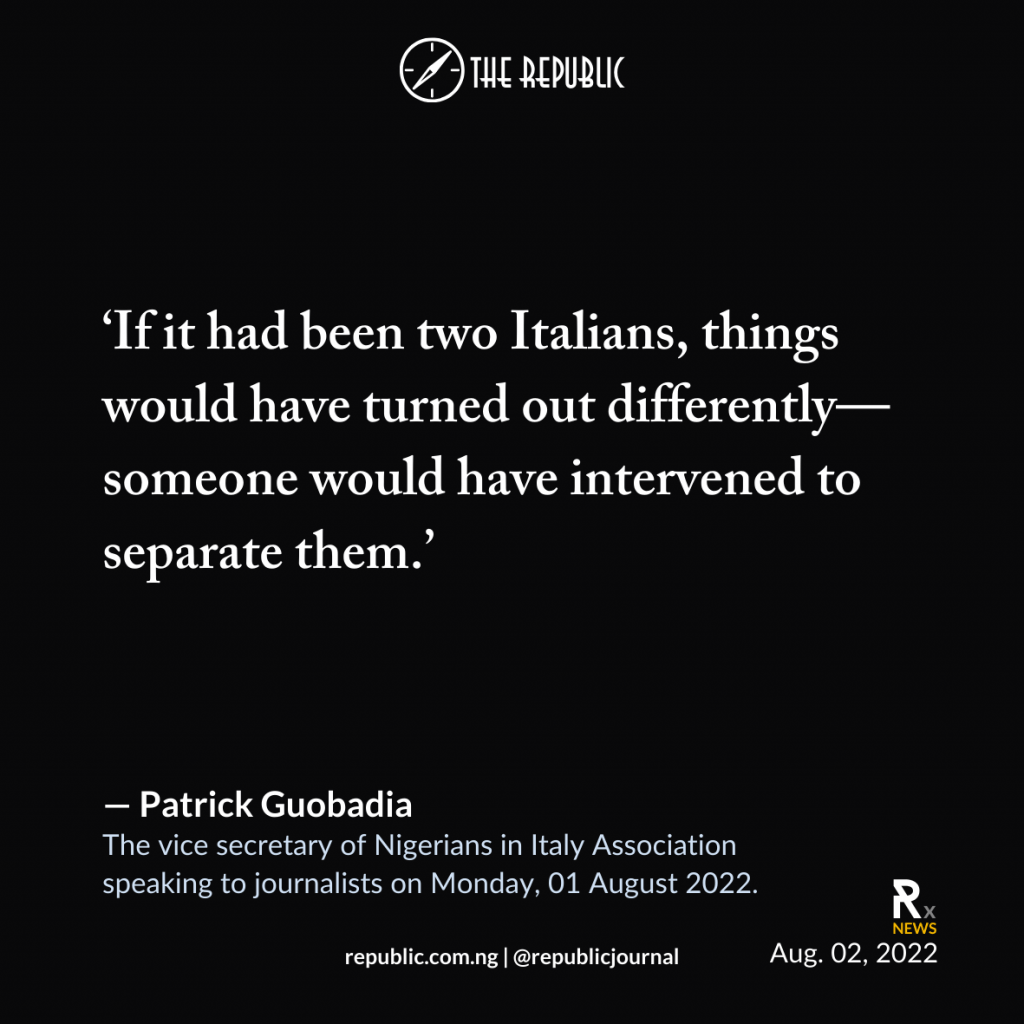 According to Patrick Guobadia, the vice secretary of the Nigerians in Italy Association, ‘if it had been two Italians, things would have turned out differently—someone would have intervened to separate them.’ Guobadia also asserted that the behaviour of the onlookers was ‘shameful’: ‘Let’s condemn the fact itself and the behaviour of people who stood by and watched a disabled person get killed with a crutch and filmed it. It is shameful,’ Guobadia said.

Ferlazzo, a 32-year-old factory worker, is being held on charges of homicide and robbery because he took Ogochukwu’s cellphone after the incident. Italian police have said that an autopsy is being conducted to determine if the cause of death was provoked by blows, suffocation or another cause.

Yesterday, a judge in Macerata ordered that Ferlazzo must remain in custody until the police investigation was over. According to Italy 24 News, Ferlazzo has been suffering from bipolar disorder. His family had also mentioned to the Italian media report, ANSA that he had a history of mental health problems, which had led to his mother being assigned as his legal guardian by a court. Ferlazzo’s lawyer, Roberta Bizzarri, said during Monday’s hearing that her client cooperated with investigators, had apologized for what happened and had said that racism was not the motive. ‘Regardless of the colour of his skin he would have committed that very ugly gesture,’ Bizzarri said.

In 2021, Ogochukwu incurred injuries from a car accident which left him needing crutches to walk. He also lost his job as a labourer following the accident. In order to cater for his family, Ogochukwu resorted to petty trade. The assassination has struck a nerve among Nigerians and some Italians who feel it was a racially motivated attack. In recent years, the Marches region, where Civitanova is located, has witnessed horrible crimes against migrants.

In February 2018, a right-wing apologist in Italy shot and injured six African immigrants in Macerata, which is 19 miles inland from Civitanova Marche. Two years before, another Nigerian man was killed in Fermo, a city south of Civitanova, after he attempted to defend his wife from racial slurs.

In a press release, the Nigerian Embassy in Italy condemned the killing of Ogochukwu, stating that it was ‘currently collaborating with relevant Italian authorities to ensure justice is served and to provide succour to the family of the deceased.’ Also reacting to the incident, the spokesperson for the Ministry of Foreign Affairs, Francisca Omayuli, said in a statement that the Nigerian government had directed the Nigerian Embassy in Italy on what to do. ‘The Federal Government of Nigeria condemns in the strongest terms the unjustifiable murder of Mr Ogorchukwu and calls on the government of Italy to bring the perpetrator of the heinous act to book without delay,’ the statement read.

According to Premium Times, three Nigerians in diaspora, including Ogochukwu have been victims of murder in the last week. On 23 July, two Nigerian men—Tosin Amos Arowoshegbe and Chibueze Momah—were killed in a club in the Canadian city of Vaughan while performing their jobs as security guards. The Canadian police have said that the shooters escaped the scene before they arrive and an arrest warrant has been issued⎈

‘There’s a Story in Everything’ Aisha Salaudeen’s First Draft