Can the Elections Be Postponed?

Can the elections be postponed?

Last week, the Independent National Electoral Commission (INEC) raised concerns about insecurity in the country, claiming that if the situation remained unchecked it could affect the conduct of the 2023 general elections.

The Commission’s chairman, Mahmood Yakubu, represented by the chairman of the Board of Electoral Institute, Abdullahi Zuru, said:

’if the insecurity is not monitored and dealt with decisively, it could ultimately culminate in the cancellation and/or postponement of elections in sufficient constituencies to hinder declaration of election results and precipitate (a) constitutional crisis.’

Elections are integral to democratic governance as it allows the voting class to freely and fairly select leaders and hold them accountable for their performance in office. However, there are instances where elections can be moved, such as in emergencies or for humanitarian reasons. In Chad, elections have been postponed five times since 2015 over a lack of funds and military action against Boko Haram. The onset of the COVID-19 pandemic also saw countries like Ethiopia, the Dominican Republic and Haiti shift their election dates. 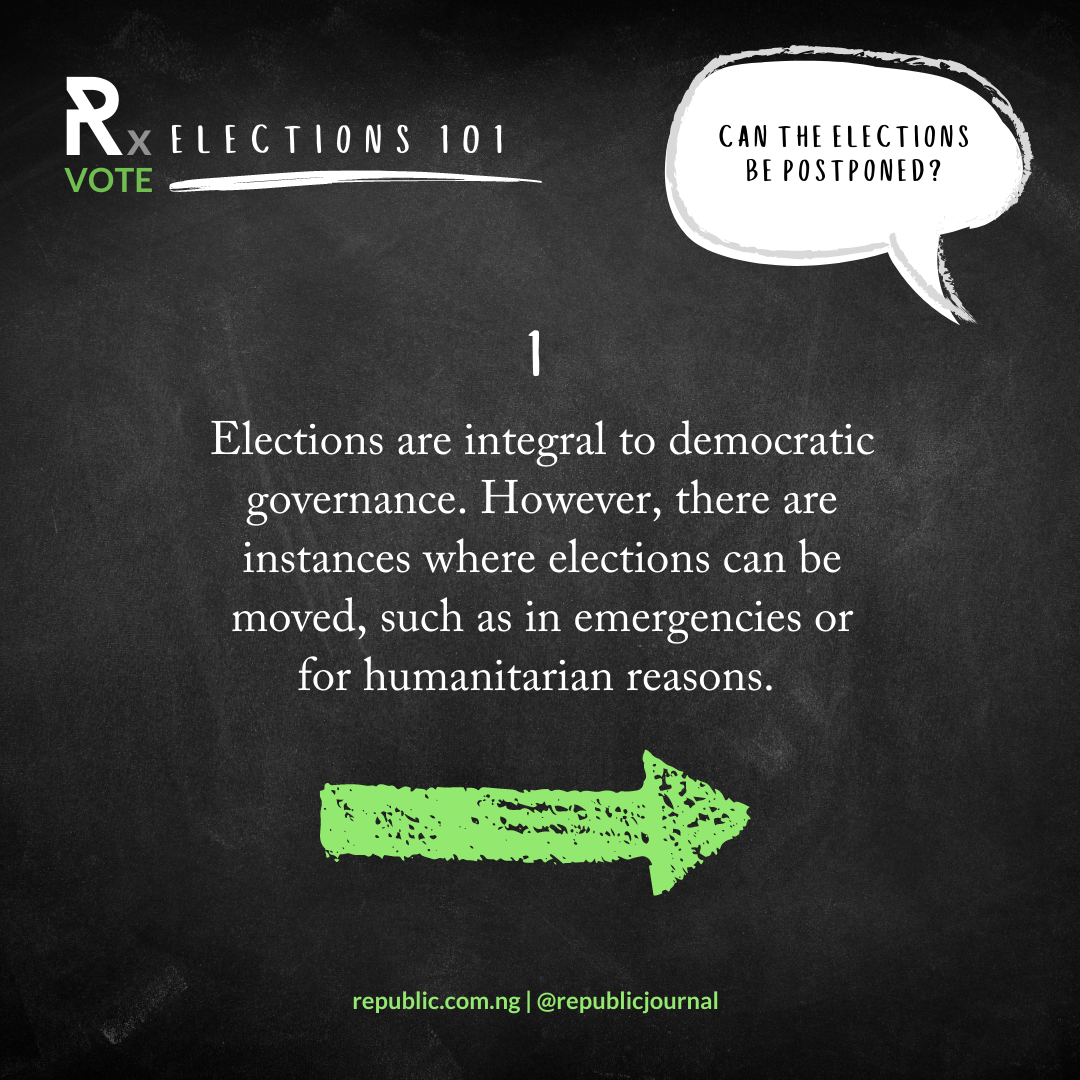 S. 24 of the Electoral Act 2022 provides instances where elections can be postponed. The Act says;

(1) In the event of an emergency affecting an election, the Commission shall, as far as practicable, ensure that persons displaced as a result of the emergency are not disenfranchised. 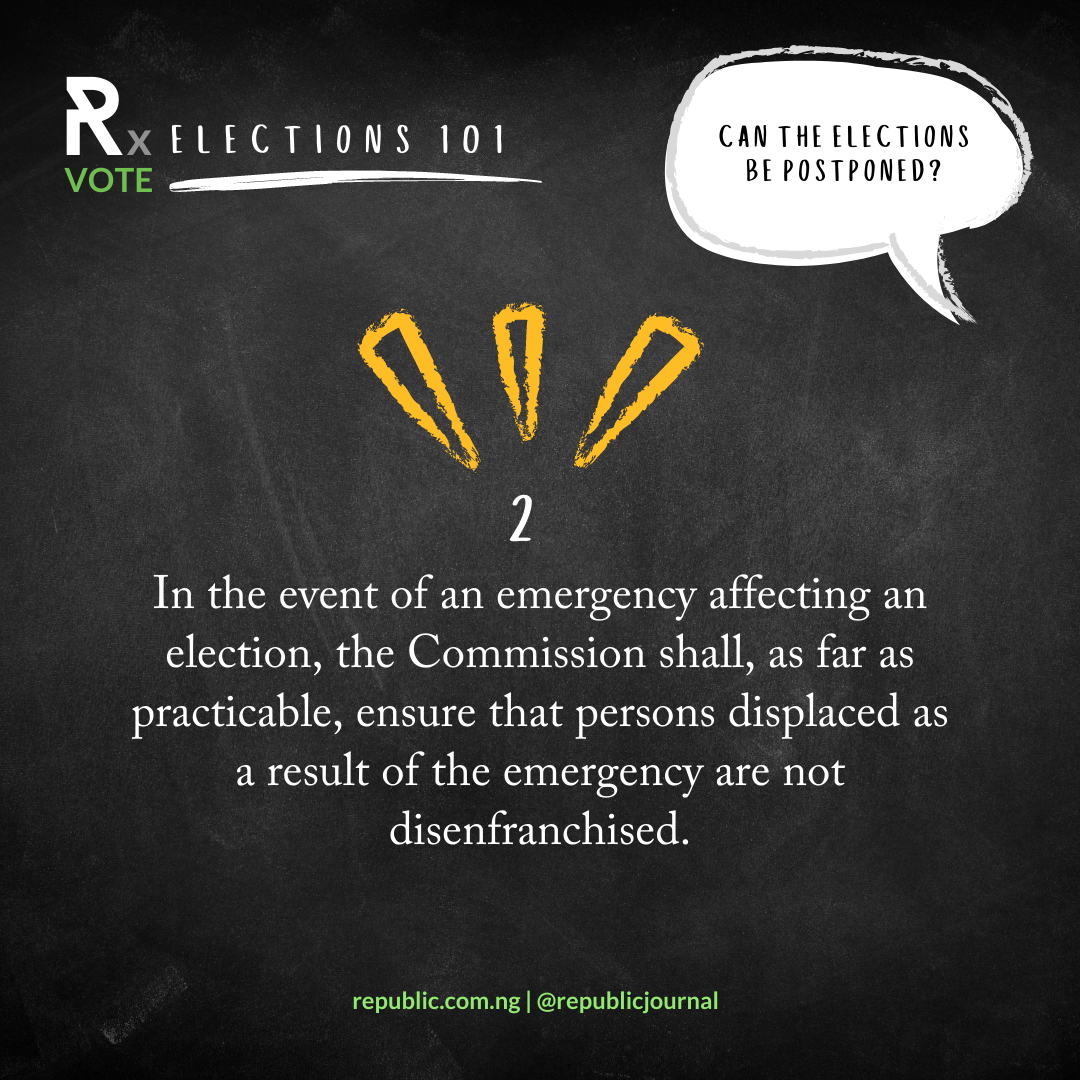 (2) Where a date has been appointed for the holding of an election, and there is reason to believe that a serious breach of the peace is likely to occur if the election is proceeded with on that date or it is impossible to conduct the elections as a result of natural disasters or other emergencies, the Commission may postpone the election and shall in respect of the area, or areas concerned, appoint another date for the holding of the postponed election, provided that such reason for the postponement is cogent and verifiable. 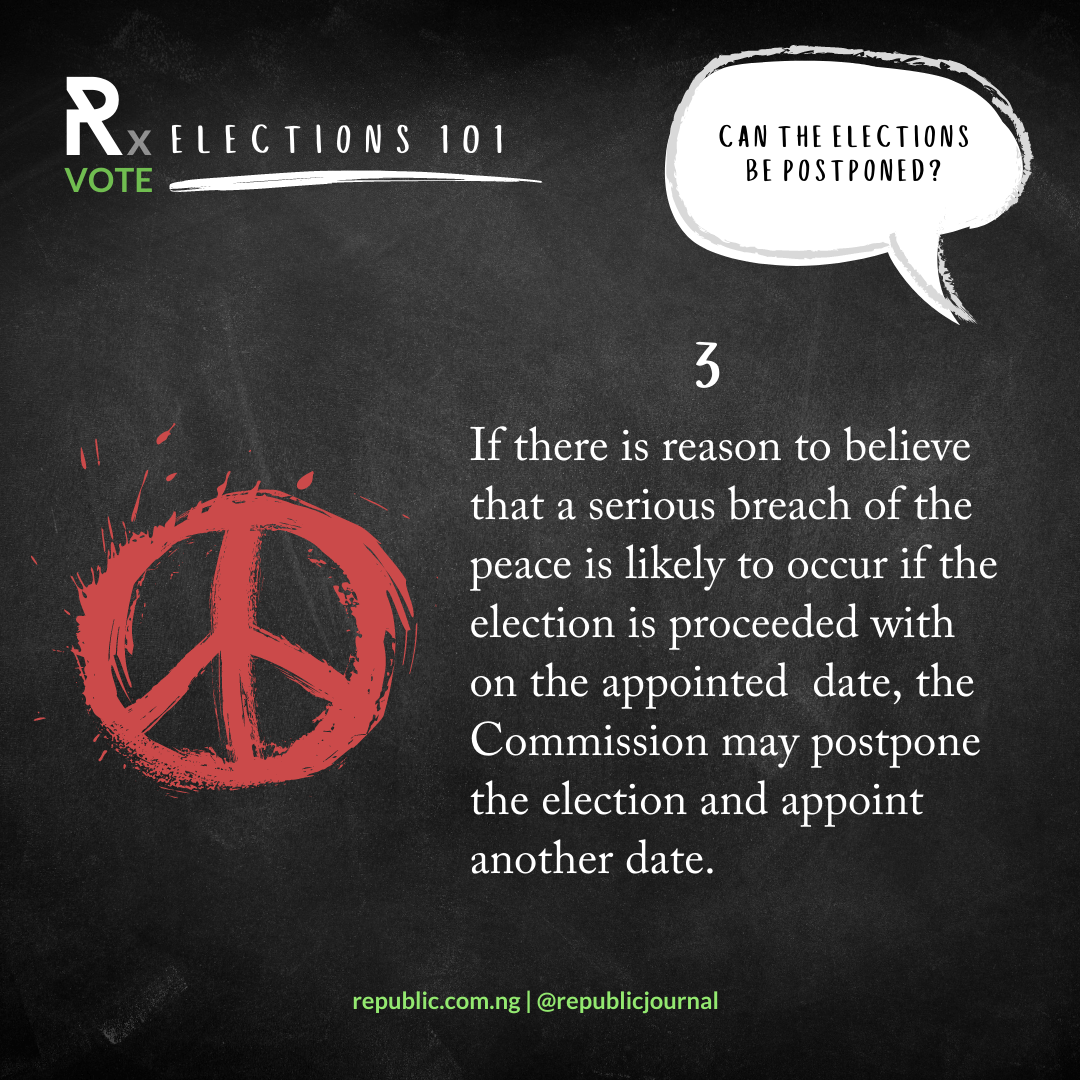 (3) Where an election has commenced and there is reason to believe that there is or has been substantial disruption of election in a polling unit or constituency or it is impossible to continue with the election occasioned by threat to peace and security of electoral officials and materials, the Commission shall suspend the election and appoint another date for the continuation of the election or the process. 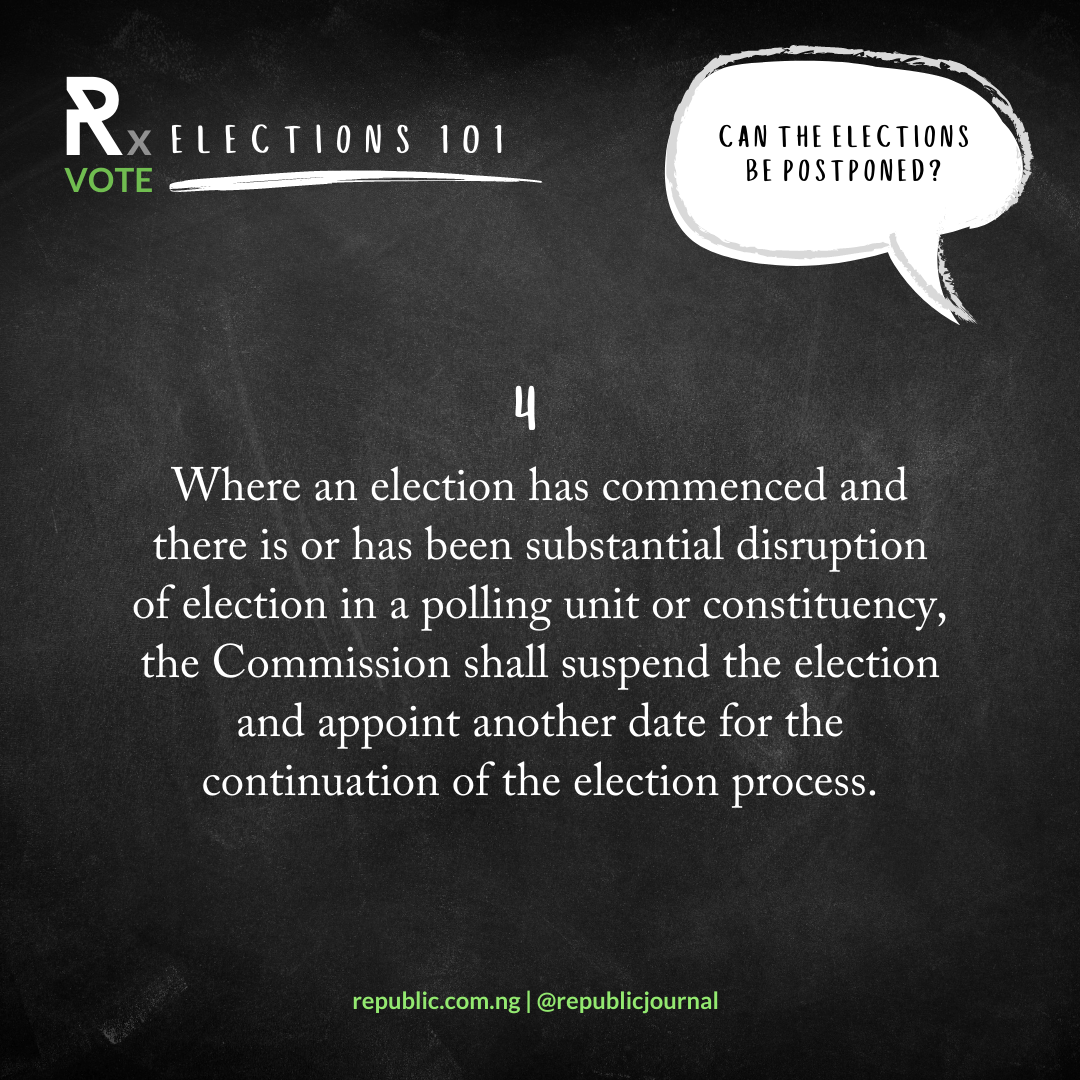 Elections have been moved in Nigeria’s previous election cycles. In 2019, the INEC postponed the presidential and national assembly elections hours before Nigerians were set to head to the polling units. The electoral body cited ‘logistics and operational problems’ as the reason for its postponement.

The Commission’s chairman, Mahmood Yakubu, blamed delays in the delivery of ballot papers and result sheets. He also noted attempts to sabotage the commission’s preparations for the elections, saying that fire outbreaks at the Commission’s facilities destroyed smart card readers and voter cards.

In 2015, then-INEC chairman Attahiru Jega announced that the Commission was rescheduling the 14 February presidential elections till 28 March over security concerns. Jega said then-National Security Adviser Sambo Dasuki had written to the Commission, saying that it could not guarantee the safety of INEC staff and voters due to the military’s operations against Boko Haram insurgents.

Similarly in 2011, the national assembly elections scheduled for 02 April had already started in states like Lagos, Kaduna, Kebbi, Delta, Zamfara and Enugu when Jega announced the postponement over the late deployment of electoral materials. The national assembly polls were postponed till 09 April, while the presidential election was moved from 09 April to 16 April and the state elections from 23 April to 16 April.

The short answer is yes, elections can be postponed.

Do you have any questions regarding the 2023 elections? If so, now is your chance to get some answers, courtesy of The Republic.

Please leave any questions you have in the comments below or email us at [email protected] Our editors will answer your questions ahead of the 2023 elections.

Remember, there are no ‘dumb questions’!⎈

Here are some Republic articles to read for more context on the 2023 General Elections: