Loud Lagos, Loving You Is Not a Thankless Job Monochrome Lagos in Photos

At the start of the Monochrome Lagos project, Logo Oluwamuyiwa had a bold ambition to map out every corner of Lagos and then develop an archive that summarized everywhere and everyone.

Lagos is the noisy world I live in. Every morning, I’m at my balcony taking it all in, the spectacular choreography of sound and vision that is Lagos. The churning of the generator starts my day and I begin counting down to when the light from the food seller’s firewood will come on. It creates a nice cinematic filter against the grey morning sky, clear enough to see the human forms fetching water or exercising. The synchronized clapping sounds of Protestant devotions clash with the Islamic chants echoing through the area calling all faithful, reminding them to commit the day to God. Next comes the rushing sound of water from taps, the clang of doors, gates creaking, and car engines rumbling, and all of this happens one after the other. By now, I’m downstairs ready to go on a walk.

At the junction, the traffic officer controls the crowd of cars, stopping and moving things and people with the turn of his hand, like a master martial artist bending chaos to his will, he brings order to that spot.

My eyes are quite unlike Lagos streets, as the world rushes in with the light, squeezing through my pupils for space, my cornea filters.  In those moments my brain waits and waits to sift through the barrage of life; my eyes conduct for me, turning crude into texture, rearranging the drudgery into a deeply amusing carnival of colour. 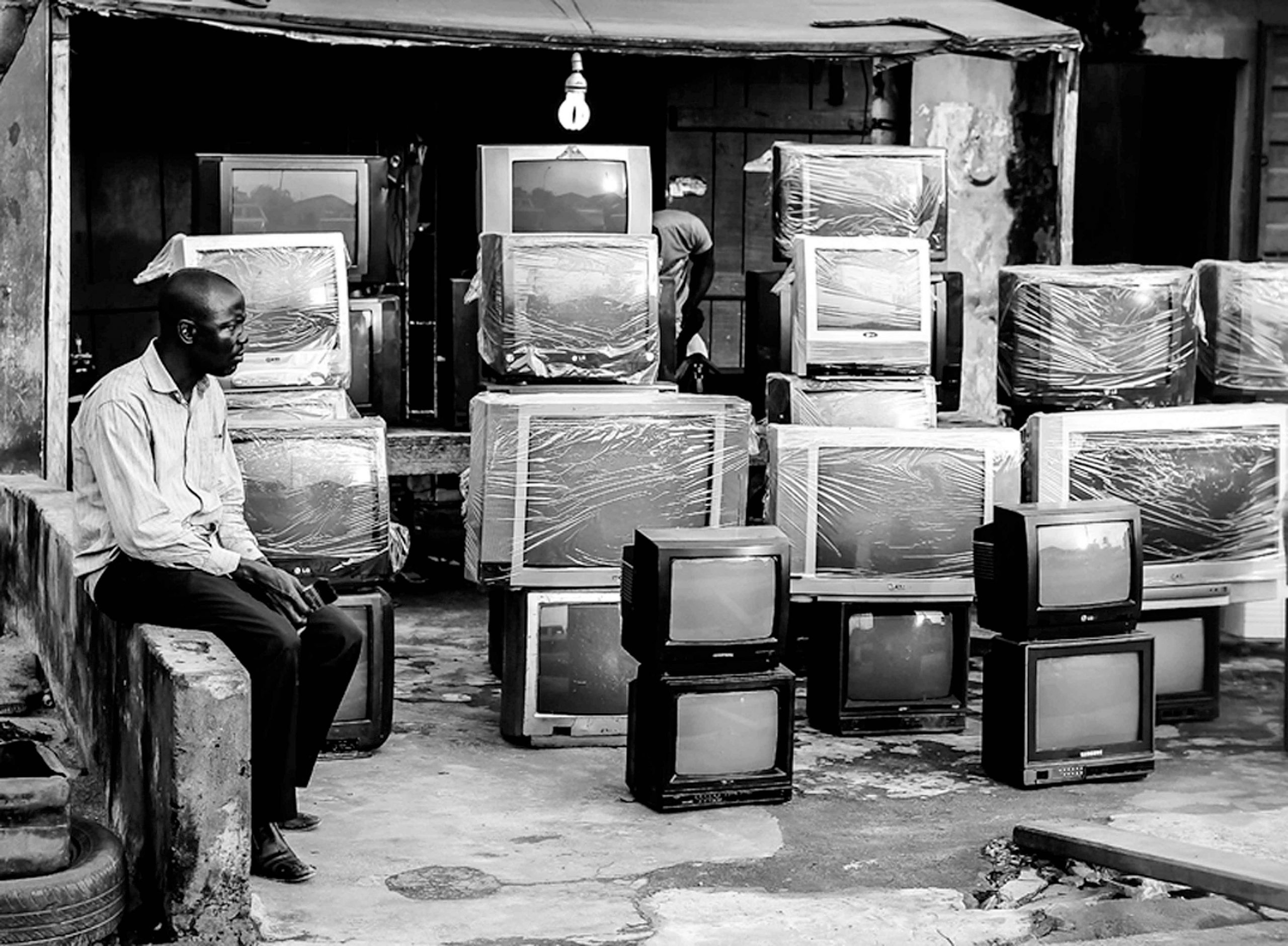 Good photography has many interpretations and I believe that our capacity to see is not a mere basic utility—surely, our eyesight does more than ensure we do not bump into a post or fall in a gutter. The ones we call visionaries in this world have used their sights to catalogue the mess that is life and helped us make sense of order. Not only have visionaries edited the world into literal visual meanings but they have also observed the parallel universe tethered to ours and making sense of our behaviors and rituals. Without our visionaries, our curriculum of existence would be boring.

In 2013, I picked up a Canon 550D DSLR camera from Aroloya street, Lagos Island, and pledged to become part of an elite group of Lagosian visionaries. I became an artist and have since enjoyed the gift and curse of that privileged membership. Taking photos and intellectually unpacking what makes Lagos tick fast became a tool for catharsis. It helped me to understand the exhibition of this dynamic West African urban reality and to find a place in there for myself. As part of the continuum. One of the many individuals whose lives are determined by the reality of this place, who share in its collective hopes and delusions, and not just a flaneur on the fringe enjoying the carnival.

At the age of 23, I started the Monochrome Lagos project. In the beginning, I had a bold ambition to map out every corner of Lagos and then develop an archive that summarized everywhere and everyone as if everybody else was performing on a stage and I was the photographer of the band. Since I turned 30, however, I have since learned that like a river, the city flows on quickly and becomes something else for someone else. That my perspective is skewed but a valid representation still, especially due to the volume of images in my archive. I have also learned that there is much still left out of the inexhaustible frame that fascinated the Ojeikheres and Sunmi Smart Coles before me. This is humbling and exciting at the same time in the sense that my renewed understanding of Lagos has not tempered the exuberance in me that believed I could tame the city and shoot it all. 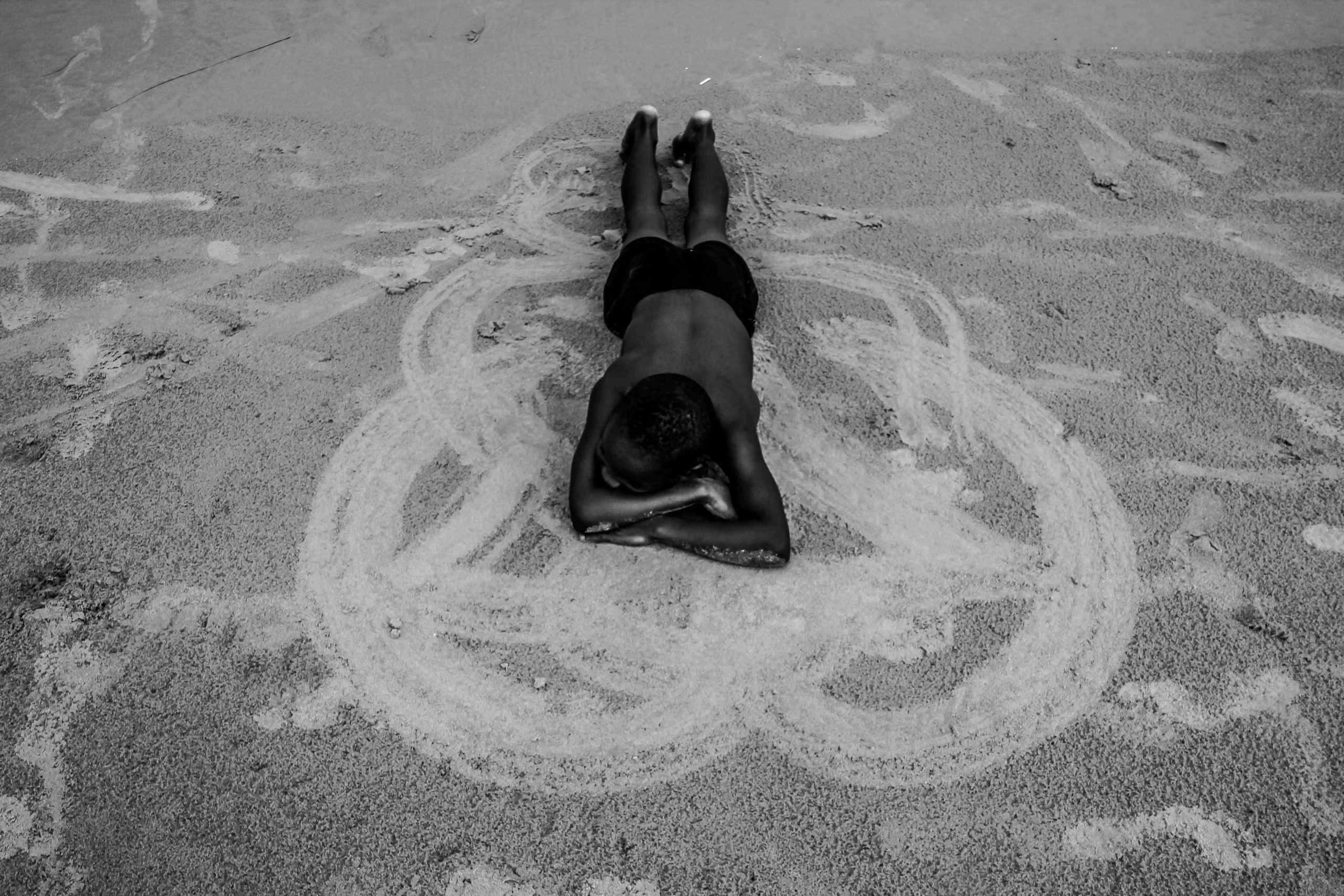 The density of Lagos makes a theatrical arrangement of nearly everything in the city. Lagos is older than the country it is forced to shrink itself into; this is evident in the state of its amenities, its constant construction and reconstruction; its hunger to maximize every corner and room for utility; how we, its residents, also bob and weave through our daily commutes, making a way where there seems to be to be no way. 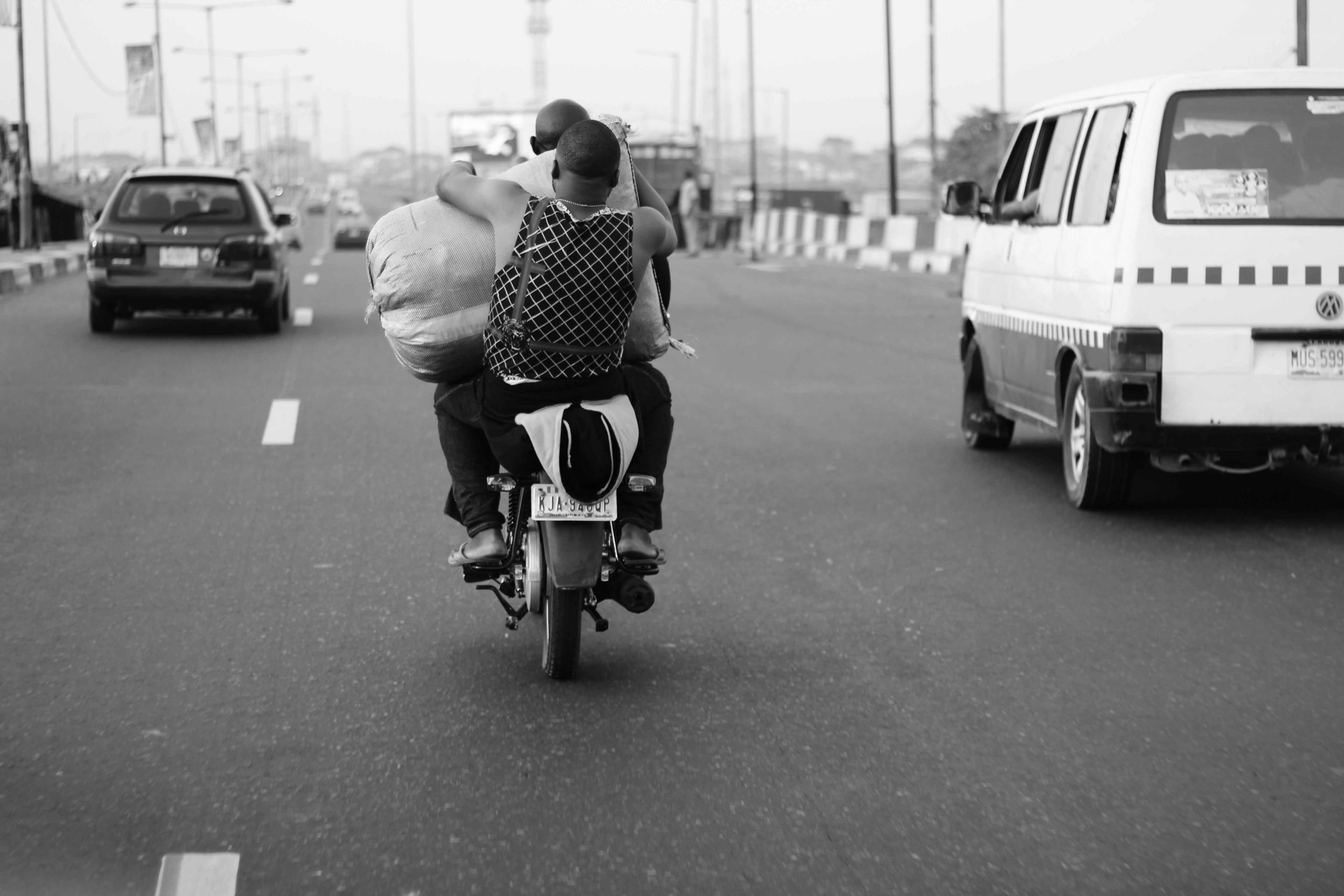 Lagos walls cake with layers of paint—peeling off, exposing abstract proofs of different lives that have lived within each space. The walls serve as the backdrop to the drama that Lagos exhibits: phony employment ads, utterly ridiculous promises of wealth and magical powers from Asian shrines. Religious banners hanging alongside Nollywood posters are our own graffiti, a flip on social commentary and unusual visual arts. On the walls, you see the hopes, fears, and trauma of the people displayed. 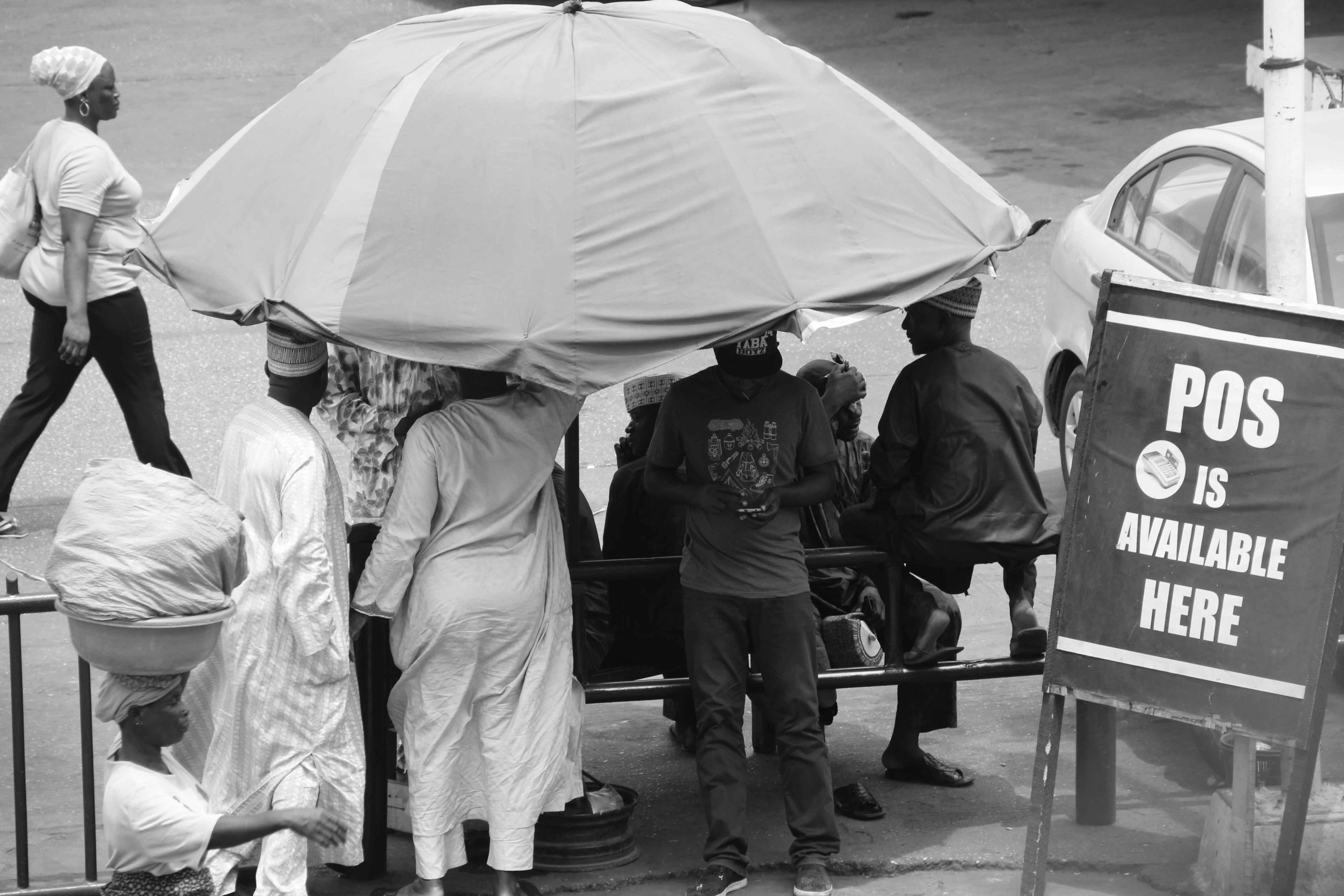 The bridges physically and psychologically divide the performance stage that is Lagos. Commerce, ‘luxury’ hospitality, and economically viable connections are prevalent on the Island while the not-so-suave Mainland bursts at the seams with the teeming mass of people that returns home to it from the Island daily, proudly.

It is these juxtapositions that surprise and impress me about the people and place, the whole contraption trudging along, spinning sometimes dizzyingly and ready to fall off from the pressure like the wheels on a Danfo. I fall in and out of love with everything I come across and I hope my anger is evident in the photos I make because it seems like only my joys are imprinted, but in there is my pain, too. However subtle, my pain is there, cast like the glassy faces of Lagosians as they make their way home in the evening, tired and oblivious of the beautiful red, blue and yellow light beams from car lights and signage that falls on their faces in the most poetic way. I wonder what their own Lagos story is. 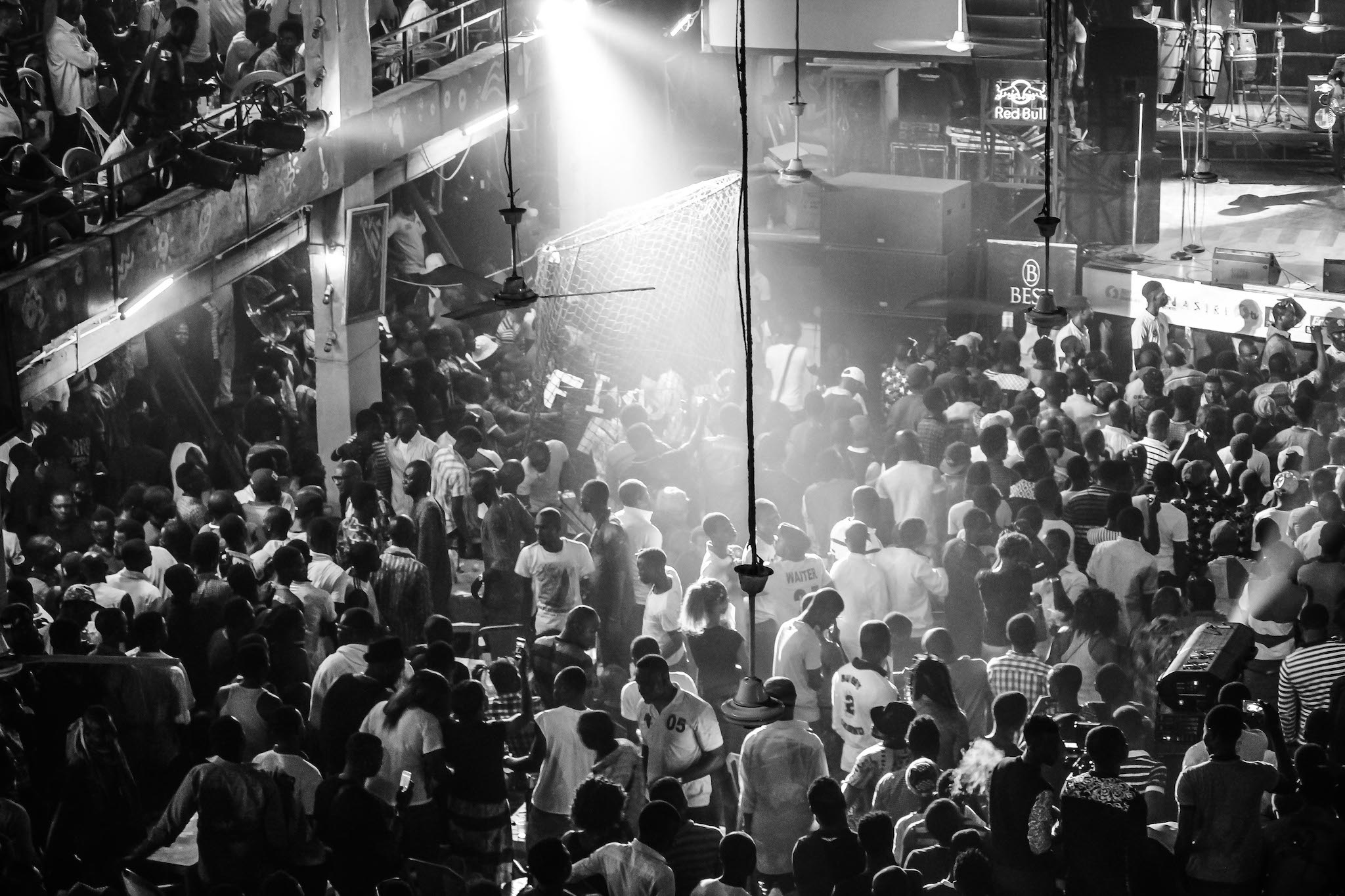 I adopted a corner of the earth marked ‘Lagos, Nigeria’ and I nip at it till I can make sense of what fuels it— a self-imposed ambition. Almost a decade stomping around the streets of Lagos, having lived in its core addresses, in Yaba, Ebute Metta, Gbagada, even as far as Agbara. I have written poems and tributes to happy times and gritty times, discussed the existential crisis of surviving here late into the night with homeless people. I have theorized intellectually with expats as European techno music blasted in the background as soundtrack for an evening in a fancy loft. And when that was over, I drove back through the night to the Mainland, bumping Fela, feeling like impermeable material that can blend in everywhere⎈