Elizabeth Olowu’s focus and desire to learn the skill of bronze sculpting was encouraged by her father—at a time when women in Benin were not allowed to participate in the craft.

Princess Elizabeth Olowu is a sculptor who is recognized as the first female bronze caster in Nigeria. Born in 1939 in the royal house of Benin to Oba Akenzua II, Olowu took interest in the objects in the royal court—Benin Bronzes—and started learning the skill of bronze sculpting alongside her mother.

Olowu’s focus and desire to learn the skill of bronze sculpting was encouraged by her father—at a time when women in Benin were not allowed to participate in the craft. She was educated at Holy Child College, Lagos and in 1966, she enrolled at the University of Nsukka to study Fine Arts. Her artistic abilities and academic performance earned her the top first-year student award in Fine Arts but her education at Nsukka was cut short because of the Biafran War. 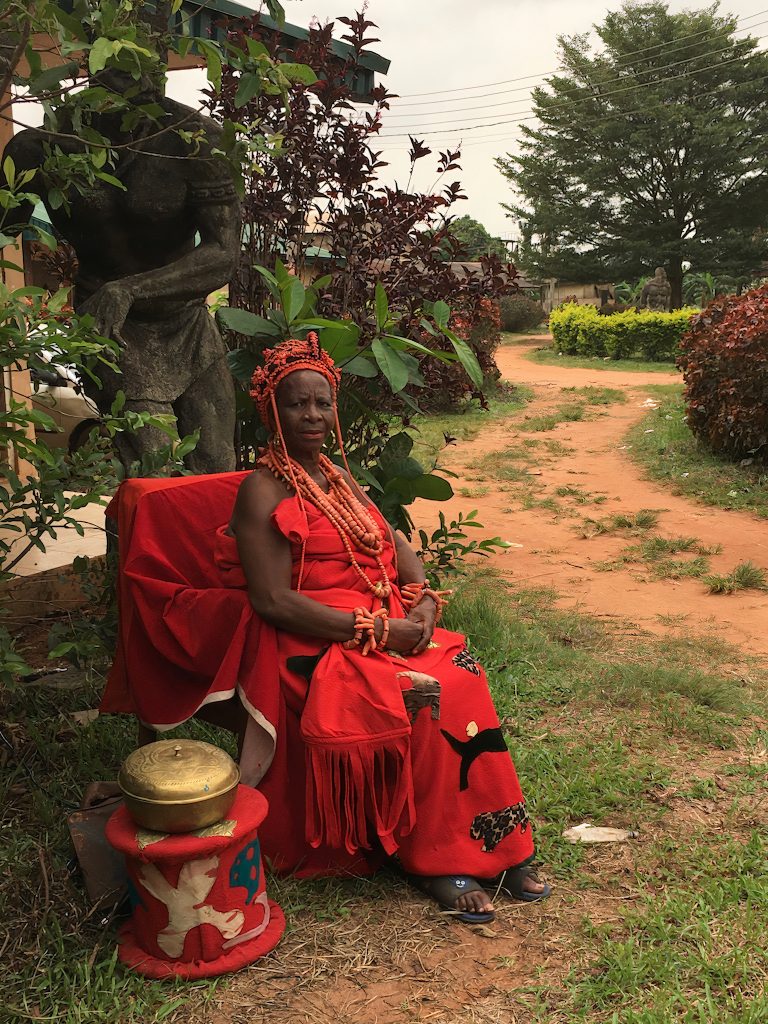 In 1976, she enrolled at the newly established department of Creative Arts at the University of Benin, where she graduated as the department’s first sculpture major in 1979. In 1984, she became the first female recipient of a Master’s of Fine Arts from the University of Benin and was recognized as Nigeria’s first female bronze caster. She was awarded the Bendel State Award for Art and Culture in 1985.

Speaking to The Guardian NG in 2016, Olowu recalled her interest in art: ‘As a child,’ she said, ‘I saw sculptures, shrines, bronzes, everywhere in the palace… Art was part of the life of the people, through singing, dancing… I started with mud but I always wanted to cast bronze. My father gave me the go-ahead. He knew I was very adventurous.’

Olowu has also described herself as a feminist. Her art majorly features women—typically pregnant or surrounded by children and her works have been described as seeking to ‘liberate womenfolk from the shackles of men, deprivation and taboos.’

Olowu’s known works include: Acada 1979—a sculpture of a young girl sitting at a desk while engrossed in a book; Oba Akenzua II, 1979 and A Couple in Love, 1981⎈

‘Acada’, 1979: A sculpture by Elizabeth Olowu of a young girl sitting at a desk while engrossed in a book. © Aware Women Artists.

Here are some Republic articles and interviews to read inspired by Elizabeth Olowu and pioneering Nigerian women:

READ
Who Was Afi Ekong?
READ
Who Were the Lijadu Sisters?
READ
Head Above Water
READ
Egba Women Unite!