The Ngonnso’ statue at the Humboldt Forum in Berlin, Germany. Bring Back Ngonnso / Twitter.

According to Nso’ oral history, Ngonnso’ founded the Nso’ kingdom after a brutal conflict with her two brothers. In her honour, the Ngonnso’ statue was made as a ‘symbol of peace and hope’ but it was stolen by German colonizers.

The Ngonnso’ statue is a female goddess statue that was stolen from the ancient Nso’ Kingdom in northwestern Cameroon. It was brought to Germany in 1903 and donated to the Ethnological Museum in Berlin by German colonial officer, Kurt von Pavel.

On 27 June, the Prussian Cultural Heritage Foundation (Stiftung Preußischer Kulturbesitz((SPK))—a German government organization that manages 27 German museums and cultural organizations—announced that it will return the statue to Cameroon as calls for the restitution of stolen artefacts in the possession of former colonial forces continue to gain momentum.

Cameroon was a colony of Germany from 1884 to 1916. In a statement by SPK, the president of the foundation, Hermann Parzinger, said: ‘The decision makes it clear that the question of returning collection items from colonial contexts is not just a question of a context of injustice. The special – especially spiritual – significance of an object for its society of origin can justify its return.’ 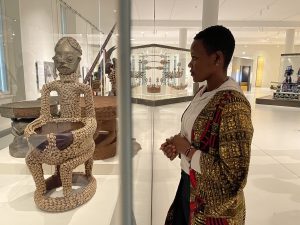 Reacting to the return, Cameroonian cultural activist, Sylvie Njobati, who has been campaigning for the return of the statue since 2021 through a civil society initiative, ‘Bring Back Ngonnso’, spoke to The Republic. She said: ‘The return is long overdue. It’s been close to 30 years of restitution request efforts made by different people from Nso’. This decision by the SPK to return Ngonnso’ is very timely. It was expected and we are very happy that the restitution is finally happening. However, it’s a process and what I wish is that the process doesn’t take unnecessarily longer than we would want it to be.’

Mbinglo Gilles Yumo Nyuydzewira, an Nso’ kingdom prince, also told Reuters that the news was received warmly in Cameroon. ‘After more than 120 years, we can only remain happy for it is a moment to commemorate and come closer to our ancestral links with love and togetherness,’ he said. 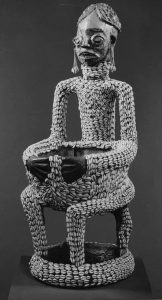 According to Nso’ oral history, Ngonnso’ founded the Nso’ kingdom after a brutal conflict with her two brothers. In her honour, the Ngonnso’ statue was made as a ‘symbol of peace and hope’ but it was stolen by German colonizers. For years, the people of Nso’ have requested the return of the statue. Njobati noted that the people of Nso’ did not have a direct connection to the museum it was being kept. Their letters often fell in the hands of German mayors or governors that had no connection to the museum. It was not until 2011 that a proper documentation of the Ngonnso’s restitution was made with the Ethnological Museum in Berlin.

Germany, which was the third-largest colonial power after France and Britain, lost all of its colonies after the First World War. In 2021, it apologized for its role in the century-old massacre of Herero and Nama tribe members in Namibia and declared this year that it would return stolen artefacts to Nigeria, Tanzania, and Namibia. On Friday, 01 July, German authorities signed a joint declaration with Nigeria’s minister of culture and information, Lai Mohammed, on the restitution of over 1,000 Benin Bronzes⎈