A doctor puts on the personal protective equipment before going to treat patients who are suspected of being infected by Ebola. Vincent Tremeau / World Bank.

The New Ebola? Should You Be Concerned About the Marburg Virus?

The Marburg virus has been described by the WHO as a family of the Ebola virus which has a fatality rate of 88 per cent.

On Sunday, 17 July 2022, the World Health Organization (WHO) confirmed the outbreak of the Marburg virus after two people had tested positive and died from the virus in Ghana. The Marburg virus, according to the WHO, is in the same family as the Ebola virus. Although the organization has reported that the virus originated from African green monkeys imported from Uganda, the Marburg virus was first identified in Marburg and Frankfurt, Germany in 1967. 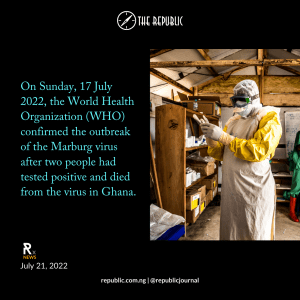 The Marburg virus is a highly infectious viral disease which causes fever, muscle pains, diarrhoea, vomiting and, in some cases, death through extreme blood loss. It has a fatality rate of up to 88 per cent. Among humans, it is spread through bodily fluids and contact with contaminated bedding. Even after people have recovered, their blood or semen, for example, can infect others for many months afterwards. According to the WHO, there are no specific treatments or a vaccine for the virus but a range of blood products, drug and immune therapies are being developed. 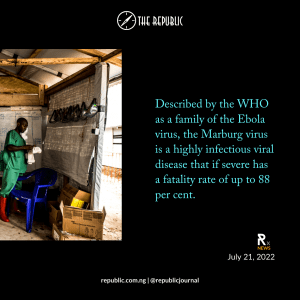 Currently, there are no known cases of the virus in Nigeria, but due to Ghana’s close proximity with Nigeria, the Nigerian Centre for Disease Control (NCDC) has announced that it is on high alert for the virus. The NCDC director-general, Ifedayo Adetifa, said in a statement on Tuesday that Nigeria has the capacity to test for and manage the virus. Adetifa asserted that the NCDC has a National Emerging Viral Haemorrhagic Diseases Working Group (EVHDWG) ‘that coordinates preparedness efforts for MVD [Marburg Virus Disease], and other emerging viral haemorrhagic diseases.’ 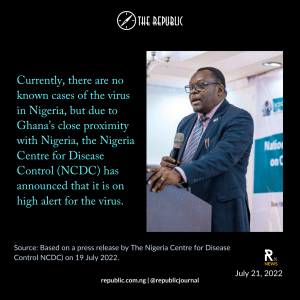 Yesterday, the federal government placed its port health services on red alert following Ghana’s Marburg virus cases. Adetifa said that the importation of the disease from Ghana and its potential impact on the Nigerian population was of a moderate risk based on some certain factors. These factors include: heightened surveillance at point of entry in Nigerian airports and borders; the incubation period of 21 days of the virus which allows proper detection of the virus; the fact that persons with MVD transmit the virus when they become symptomatic unlike for SARS-CoV-2—that causes COVID-19—which can be transmitted by infected persons without symptoms; and Nigeria’s capacity to respond to the outbreak. 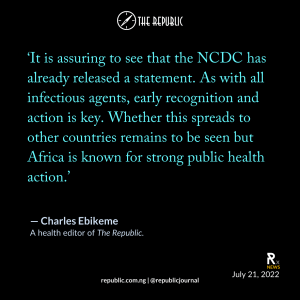 According to health editor of The Republic, Charles Ebikeme, Nigeria’s response to the Marburg virus is assuring. He says: ‘It is assuring to see that the NCDC has already released a statement. As with all infectious agents, early recognition and action is key. Whether this spreads to other countries remains to be seen but Africa is known for strong public health action.’ 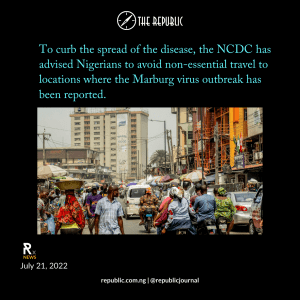 To curb the spread of the disease, the NCDC has advised Nigerians to adopt preventive measures such as: avoiding non-essential travel to locations where the outbreak is reported; avoiding direct contact with blood, saliva, vomit, urine, and other bodily fluids of people with suspected or confirmed Marburg virus disease; and avoid contact with sick animals⎈

Here are some Republic articles to read for more context on the Marburg virus: