The Inflation Report Why Are Food Prices Increasing in Nigeria?

Fueled by a high cost of diesel and rising prices of food, Nigeria’s inflation rose to its highest level in over five years.

On Friday, 15 July 2022, the National Bureau of Statistics (NBS) released its Consumer Price Index (CPI) report. The CPI measures the average change over time in the prices of goods and services consumed by people for day-to-day living. According to the report, Nigeria’s inflation rate rose to 18.6 per cent in June 2022—5 per cent more than the rate in May 2022. 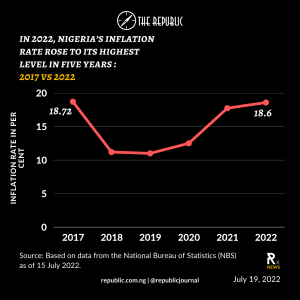 Fueled by a high cost of diesel and rising prices of food, Nigeria’s inflation rose to its highest level in over five years. The new rate is the highest the nation has recorded since January 2017. Also, the rise in the cost of gas and staple food items (such as bread, cereal, potatoes, yam, fish, and meat) contributed to the high inflation rate. 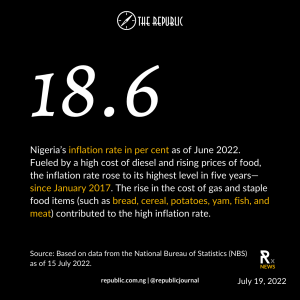 Experts have said that the war in Ukraine has disrupted the importation of oil and wheat to different parts of the world. Ukraine and Russia produce a quarter of the world’s wheat—which is a primary raw material in producing bread and a lot of other cereal products.

Last week, President Muhammadu Buhari said that his administration’s actions had helped protect Nigeria from the damaging effects of the Russia-Ukraine conflict and the COVID-19 pandemic. He insisted that investments had been made over the previous seven years to assure Nigeria’s food security, and prepare the country for the disruptions in the world’s agricultural supply. However, the NBS report revealed that the spillover effect of the Russia-Ukraine war and the COVID-19 outbreak has increased the cost of living in Nigeria.

In a bid to control inflation, the governor of the Central Bank of Nigeria (CBN), Godwin Emefiele, had announced in May that the Monetary Policy Rate (MPR) was increased to 13 per cent from 11.5 per cent. The MPR is the rate at which the CBN lends to commercial banks and often determines the cost of funds in the economy. In theory, by increasing the MPR, the amount of money banks can lend to their customers reduces. The commercial banks charge a higher interest rate for loans, making acquiring loans more expensive. This, therefore, discourages spending and results in a lower economic growth and lower inflation. But, as the NBS’ inflation report has proved, the CBN increasing the MPR, did not help lower inflation in the country. 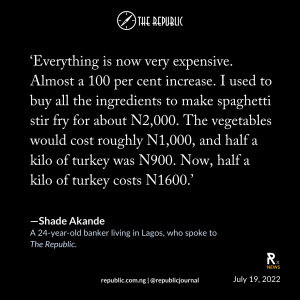 The inflation rate has eaten into Nigerian consumers’ purchasing power. Shade Akande, a 24-year-old banker who lives in Lagos, spoke to The Republic, about her experience with the surge in food items: ‘Everything is now very expensive. Almost a 100 per cent increase. I used to buy all the ingredients to make spaghetti stir fry for about N2,000. The vegetables would cost roughly N1,000, and half a kilo of turkey was N900. Now, half a kilo of turkey costs N1600. What will I eat?’ 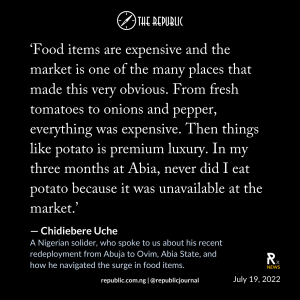 Also reacting to the price increase in food items, Chidiebere Uche, a Nigerian soldier, spoke to us about his recent redeployment from Abuja to Ovim, Abia State, and how he navigated the surge in food items. He says: ‘Life in the East is totally different from what I experienced in the North. Food items are expensive in the East—and the market is one of the many places that made this very obvious.

‘The only food items that are cheap in the East are items that are produced in the East and South South, excluding fish. From fresh tomato to onions to tin tomato and pepper, everything was expensive. For a state like Abia, it is unfair to be buying 6-7 [tiny tomatoes] for N200. Then things like potato is premium luxury. In my three months at Ovim, Abia State, never did I eat potato because it was unavailable at the market.’

Many Nigerians make around the country’s minimum wage of 18,000 naira ($43.35) monthly. This, coupled with an unemployment rate of 33.5 per cent, has pushed many Nigerians to the brink of poverty. Bloomberg has reported that food prices are still projected to rise in the coming months as a result of ongoing gasoline shortages, rising diesel prices, irregular power supplies, election spending, and the current devaluation of the naira⎈