Tems giving her acceptance speech at the 22nd BET Awards held at the Microsoft Theater in Los Angeles. 26 June 2022. BET.

Tems is currently regarded as one of Nigeria’s mainstream afrobeats female artists.

On Sunday, 26 June, at the 22nd BET Awards held at the Microsoft Theater in Los Angeles, Temilade Openiyi, popularly known as ‘Tems’, became the first female Nigerian artist to win a BET award. The singer, songwriter and producer won two awards: one under the Best Collaboration category, for the 2021 ‘Essence’ remix featuring Wizkid and Justin Bieber. She also won the award for the Best International Act.

The Black Entertainment Television or ‘BET’ Awards are awarded every year to celebrate Africans and African Americans that have been exceptional in music, acting, sports and other fields of entertainment. Accepting the Best International Act award, Tems dedicated her achievement to young women and artists. She said: ‘Where I am from, things like this don’t happen. This is a dream and as you are watching me, I want you to imagine yourself as me because you are meant to be here, too. And so, I am dedicating this to every single young woman, every artist, everybody that is striving and dares to dream.’ 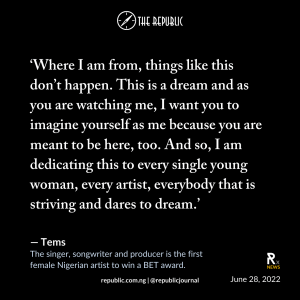 Tems is currently regarded as one of Nigeria’s mainstream afrobeats female artists. Her 2018 debut song ‘Mr Rebel’ in which she describes herself as ‘the leading vibe’ was self-produced. At the time, without access to a studio, Tems recorded with only her laptop and earphones.

In 2019, her first hit song, ‘Try Me’, was released and in 2020 she released her first EP, For Broken Ears, which reviewers described as an ‘R&B record, with swirly synths and airy harmonies.’ According to RollingStone, Tems ‘is the future’, and the artist whose vocals helped make Wizkid’s 2021 ‘Essence’ a breakout hit. ‘Essence’, which reviewers described in 2021 as the ‘song of the summer’, made history as the first ever Nigerian song to chart on the Billboard Hot 100 and Billboard Global 100. The song also received a Grammy nomination at the 64th Annual Grammy Awards for Best Global Music Performance.

Tems, who fell in love with music from a very young age, grew up listening to Aaliyah, Destiny’s Child and Lil Wayne. She joined the choir when she was a teenager and learned how to play the piano. After secondary school, Tems, wanted to follow her dreams by going into music fully, but studied Economics at university based on her mother’s encouragement to put her education first.

In 2021, she spoke with Apple Music about how quickly things had changed for her since she quit her job in 2019 to completely follow music. ‘It’s all happening so fast,’ she said. ‘There’s just so many things that have happened, trying to take some time to take it all in, and be grateful for all this grace and all the blessings’⎈

Here are some Republic articles to read for more context on Nigerian and African music:

READ
Who Were the Lijadu Sisters?
READ
Enjoy Your Life
READ
The Revolution Is a Song!