‘[The black soot] is a reflection of the state of affairs and government have failed to protect the citizens.’ — Eugene Abels, initiator of the ‘StopTheSoot’ campaign.

In Rivers State, efforts to navigate the COVID-19 pandemic could be rendered futile due to a long-running air pollution crisis—black soot. Years after the 2016 and 2018 #StopTheSoot protests, Port Harcourt and other parts of Rivers State in south-eastern Nigeria are still covered in black soot. Recently, residents’ health concerns have re-emerged due to the emergence of the new COVID-19 variant, Omicron.

Black soot is a black particulate matter made up of carbon and results from the incomplete combustion of fossil fuels. Residents of Rivers State and experts across Nigeria believe that illegal crude oil operations and the destruction of products from illegal oil refineries are responsible for the black soot. In an interview with CNN, Saatah Nubari, a state resident, says, ‘one of the causes [of the black soot] is destroying products that are gotten from illegal crude refineries. When you burn them, it goes up into the atmosphere’. 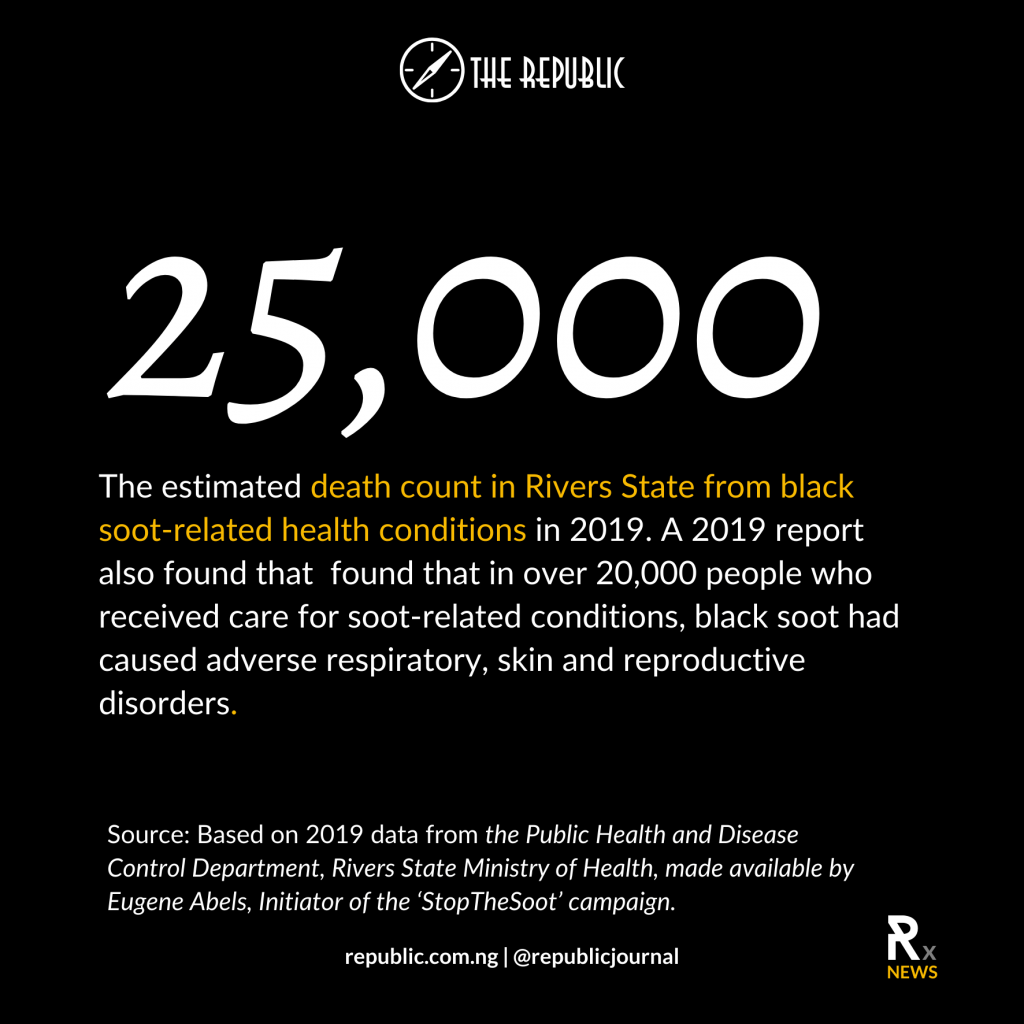 A 2019 report based on analysis of Rivers State hospitals from 2014-2018 found that in over 20,000 people who received care for soot-related conditions, black soot had caused adverse respiratory, skin and reproductive disorders.

Eugene Abels, the initiator of the ‘StopTheSoot’ campaign, told The Republic that the report also indicated that, as of 2019, the death rate from black soot-related health issues in Rivers State had risen to 25,000 (including babies). ‘We have called on the Federal Government and petitioned the UN, about 400 pages, backed by scientific reports, they’ve ignored us,’ he said. ‘[The black soot] is a reflection of the state of affairs and government have failed to protect the citizens,’ Abels added.

According to the World Health Organization, outdoor air pollution causes 4.2 million deaths each year across the world. Additionally, 99 per cent of the global population is exposed to a high level of air pollution which puts them at risk for heart disease, stroke, cancer, and other life-threatening medical conditions. Black soot, in particular, can be linked to a wide range of severe health effects, including acute bronchitis (an inflammation that causes coughing) and an aggravated breathing situation for asthma patients.

As the world continues to grapple with COVID-19, studies have indicated that air pollution could exacerbate the pandemic’s impacts on people. Abels also stated that with Omicron already detected in Nigeria, he expects a major breakout in Rivers State because the immune systems of many residents are ‘highly debased’. Presently, Nigeria has recorded over 200,000 COVID-19 cases, with over 13,000 cases (the third largest after Lagos and Abuja) recorded in Rivers State alone.

Abels provided several initiatives he believes can mitigate the black soot crisis, including: an environmental audit of Rivers State; a comprehensive audit of the respiratory organs of all residents of Rivers State; and the establishment of more accessible health care facilities in Rivers State⎈

Listen to his full comments ( 1 minute) below: