Hushpuppi Has Been Sentenced to Eleven Years in Prison. ONYINYE DIKE

A US District Court has sentenced Ramon Olorunwa Abbas, ‘Hushpuppi’, to eleven years and three months in prison. Hushpuppi’s is the tale of Icarus. But a contributing factor to the wind beneath his artificial wings was the largely unconditional acceptance and support that he gained from his almost cult-like following of over two million people on Instagram.

On 07 November 2022, Ramon Olorunwa Abbas, better known as ‘Ray Hushpuppi’ was sentenced to over eleven years in prison for conspiring to launder millions of dollars through online scams. He was also ordered to pay $1,732,841 in restitution to two victims. Due to his crimes, Don Alway, the assistant director in charge of the FBI’s Los Angeles field office, described Hushpuppi as ‘one of the most prolific money launderers in the world’.

Before his arrest in 2020, Hushpuppi was known for many years for his excessive displays of wealth across social media platforms, Instagram and Snapchat. Residing mostly in Dubai, Hushpuppi amassed some 2.3 million followers on Instagram, documenting lavish purchases and activities in over 500 posts on the platform. He enjoyed over five years of ‘Instagram fame’ and seemingly unlimited wealth and freedom, showcasing his lifestyle with every intention of ‘living it up’ for the foreseeable future. But the FBI had other plans: they arrested Hushpuppi in June 2020 and extradited him to the US to face trial. He has since remained in federal custody following his expulsion from the UAE. 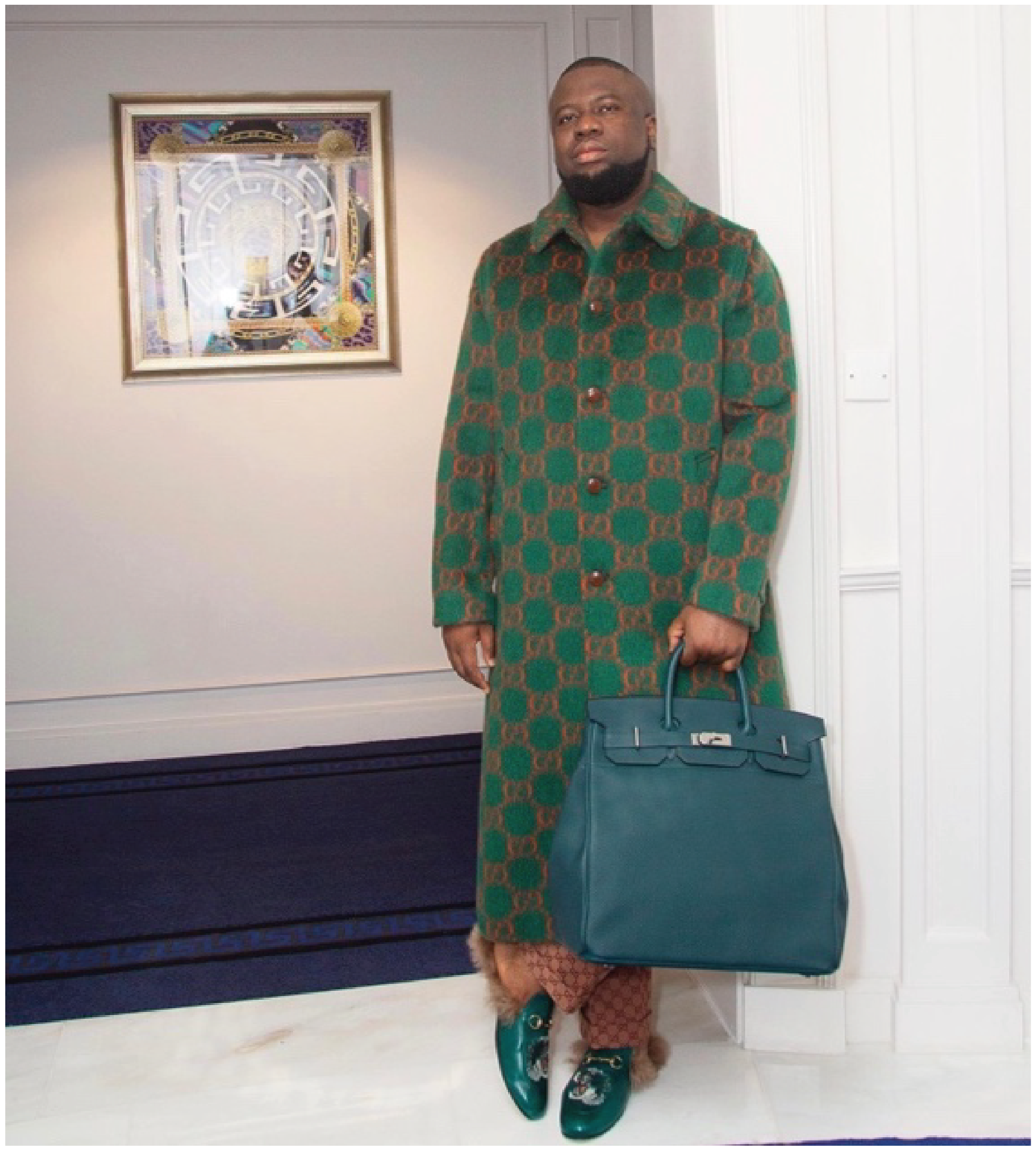 Now, considering Hushpuppi’s sentencing, a question springs to mind: why, knowing the source of his wealth and his crimes (which he plead guilty to in April 2021) would Hushpuppi elect to display such ‘opulence’ online?

The question becomes more poignant when considered alongside the fact that Hushpuppi’s crimes cost his victims more than $24 million in losses. Not only did he have no way of knowing who each of the then-2.3 million sets of eyes following him belonged to, there was also the fact that he continued to scam multiple victims, using banks all over the world to launder money. One would expect for more caution on his part to be exercised, as it stands to reason that the more crimes one commits, the more opportunities there are to be convicted.

In truth, there were always questions about Hushpuppi’s wealth, and even though most were certain that he was making a less than honest living, they had no problem worshipping him as a celebrity, even with no apparent skills or talents to warrant such admiration. The wealth he displayed was enough to have him rubbing shoulders with the ‘who’s who’ both in Nigeria and abroad.

The blind acceptance and admiration of such a person, despite the circumstances surrounding their wealth can only be a reflection of Nigerian societal values, a reminder that in society’s eyes, cash is, and continues to be king. This meant that to Hushpuppi, who came from very humble beginnings, the reward of recognition, far outweighed the risk of suspicion.

The above is not to suggest that Hushpuppi made no attempt to cover his tracks and befuddle his audience. Around his 37th birthday on 11 October 2019, for instance, Hushpuppi sat down with radio personality Daddy Freeze, stating that he made many charitable donations. Such donations never featured on Instagram, despite the fact that almost all his other uses of money appeared to. Hushpuppi went on to state:

My heart is pure. I do a lot of good that even a lot of social media don’t have to know about, he said. I sleep good at night. When something good happens to me, I know it’s because I did good. Not because somebody promised me money that I did not work for, or money that I don’t deserve. 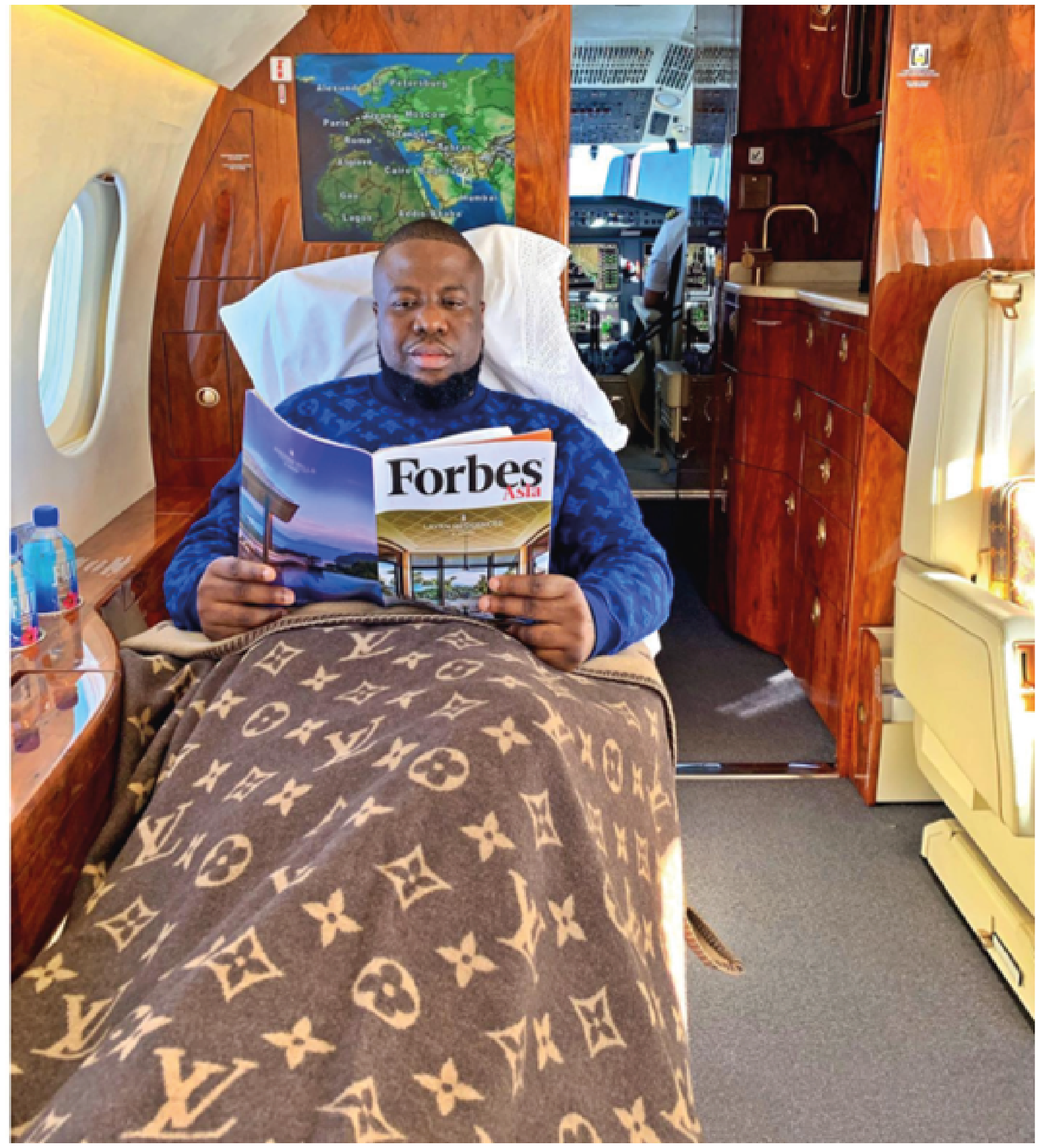 Hushpuppi in a private luxury jet adorned with a Louis Vuitton sweater and blanket. Source: Instagram

Perhaps it was this misguided sense of what he ‘deserved’ that pushed Hushpuppi to pursue scam after scam with such bravado; his apparent mission being to achieve new highs of wealth and opulence, through new lows of skullduggery. Among the most notable of these lows was his attempt in 2021 to scam a person who wished to fund a children’s school in Qatar out of over $1.1 million.

In July 2021, acting United States attorney, Tracy Wilkinson, revealed in a statement that Hushpuppi and his accomplices were able to appear to be financing the school, ‘by playing the roles of bank officials and creating a bogus website’.

Hushpuppi’s is the tale of Icarus. But a contributing factor to the wind beneath his artificial wings was the largely unconditional acceptance and support that he gained from his almost cult-like following of over two million people on Instagram. In line with this view, Kristi Johnson, acting director of the FBI’s Los Angeles office, stated that Hushpuppi’s ‘celebrity status and ability to make connections seeped into legitimate organizations and led to several spin-off schemes in the US and abroad’. However, Hushpuppi’s Instagram page, that he had not utilized for over two years (due to his arrest), which in spite of this, continued to gather new comments and followers, has since been deleted.

Although those directly responsible for aiding and abetting Hushpuppi were arrested alongside him, perhaps instances like these, are a society-wide call to examine what it is that we as Nigerians directly or indirectly support, in the name of entertainment or indifference.

We may not feel the consequences of actions like Hushpuppi’s as individuals, but as a nation our reputation becomes harder and harder to salvage. Our reputation often affects our ability to engage with the world, to travel, either as visitors or permanent residents, to numerous countries—as immigration laws are adopted to keep Nigerians out. Whatever view one has of Hushpuppi, the unignorable fact remains that the actions of individuals like him become the consequences of our nation⎈

Here are some Republic articles to read for more context on cybercrime in Nigeria: